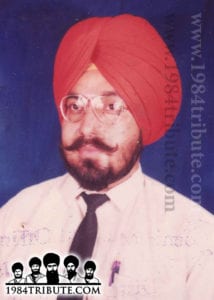 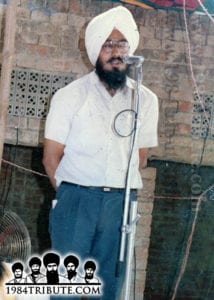 To crush the Sikh Freedom Movement, the Indian government arrested, Tortured and killed many Sikh professionals that supported the movement for the free Sikh Nation, for example Sikh lawyers, Sikh doctors and many more professionals. Amongst such shaheeds was PHD Economical and LLB Bhai Dharambir Singh Kamoke.

In the house of Sardar Harnam Singh, five children took birth from the womb of Mata Nain Kaur. Here are their names, Bibi Tripat Kaur, Bibi Davinder Kaur, Bhai Dharambir Singh, Bhai Manmohan Singh and Bhai Surjit Singh. In 1947, when the partition happened between India and Pakistan, the family of Bhai Sahib came to live in Jammu from Ponchh. Up until in 1965, Bhai Sahib’s family stayed in Jammu, then Sardar Harnam Singh was appointed as the granthi at a gurudwara in the village of Kamoke, district Amritsar. After this the family came and settled in village Kamoke, Bhai Sahib was very young at this time.

Bhai Sahib’s childhood was mostly spent in Kamoke playing with other children of Kamoke. Bhai Sahib studied up until 9th class at a school of the neighbouring village, Butala and took his exams for the 10th class at Gwalior in Madh Pardesh. After this Bhai Sahib took admission in the college of Sathiala, but due to financial circumstances Bhai Sahib had to drop out of college. Then soon Bhai Sahib started working with some friends in Chandigarh and also started studying at college. In Chandigarh Bhai Sahib met Sant Jarnail Singh Ji Bhindranwale at a house of a retired brigadier. After this meeting Bhai Sahib became a worker of Sikh Student Federation.

Bhai Sahib carried on doing big peaceful protests to pressurize the Indian government to give justice to Sikhs and while in jail Bhai Sahib studied the highest of studies. In 1991, Bhai Sahib was married to the daughter of Sardar Virsa Singh, Bibi Sukhwant Kaur from the village of Bulla, district Kartarpur. Bhai Sahib never had time to spend with family due to the harassment of the Indian security forces and also, most of Bhai Sahib’s time was spent in jails.

For eight days Bhai Sahib was tortured somewhere in Jammu, his legs were broken. Exactly after eight days on 21st May 1992, the police announced that a Khadku from Punjab, Bhai Dharambir Singh Kamoke and an unknown Khadku from Kashmir were killed in a fierce encounter. Upon hearing the family was shocked and saddened. The family went everywhere to get the shaheedi saroop of Bhai Sahib but the police did not give the shaheedi saroop. The family asked for justice in the Indian courts but they were ignored just like the families of Khalistan shaheeds.