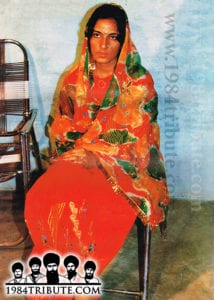 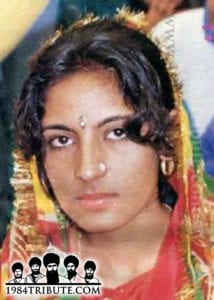 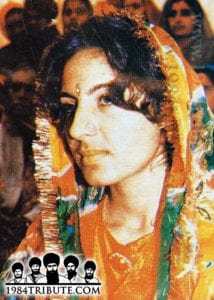 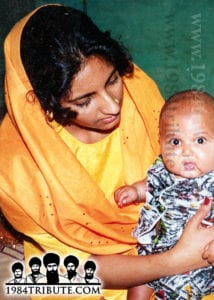 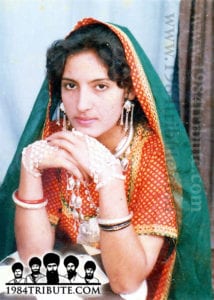 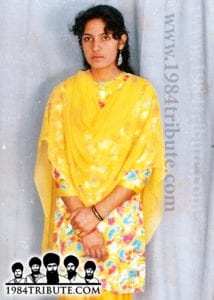 Bibi Amandeep Kaur was the sister of Bhai Harpinder Singh Goldy alias Pamma. She was only twenty when she was arrested, tortured, raped and then killed by the Punjab Police. Bibi Amandeep Kaur, before her Shaheedi was on the run but had the courage to tell her story to human rights workers.

Here is her story in her own words, shortly before she was murdered:
“Jaswinder Singh Sraa son of Surjeet Singh of Jassowal village Ludhiana district. Was born and brought up on the UK. He presently lives in Mississauga Canada. He came to India on October 12, 1991 for marriage on October 24th. We along with my father Jaswant Singh, village Headman Bhag Singh and Member of Panchayat Meet Singh went to the office of the sub-registrar, Rampura Phul, for registration of the marriage. As we came out of the courtroom, the SHO of Phul, picked up three of us, me, my husband and my father. We were taken to Phul Police Station where SSP Kahlon, SP Mokham Singh, DSP Aulakh and SP of Operations were present.

The SSP on seeing us, promptly ordered that my two male relations be stripped naked in my presence. He then took out the picture of his slain son and addressing them remarked that he had taken the revenge for the murder (by dishonouring me, the sister of an underground Sikh activist).
Kahlon then started abusing my husband and father. He took hold of a laathi to beat the two. It was then the turn of his subordinates who beat us with their leather belts. The SSP ordered that my husband and father slap each other.

After this cruel exercise, we were blindfolded. I was relieved of my two wedding rings, a pair of ear-rings and one golden chain. From my husband, the SSP snatched $500 and a bracelet of 3.5 tolas and his wedding ring. My father was similarly robbed of Rs. 2500. I and my husband were put into our van PCL-8433. We heard the SSP directing his staff to set our house on fire and bring the wife and younger daughter of Jaswant Singh (my mother and sister) to the police station for similar treatment. After Kahlon left, we were brought back to the police station. While my husband and father were put in the lock-up, I was kept out for maltreatment [i.e. for sexual assault].
Early next morning we three were taken to Sardulgarh by our van. On October 27, my mother Surjeet Kaur was brought to us. She told us her story of dishonour [rape], torture and maltreatment. She was kept in a Rampura police station and at the head office of CIA Bathinda

In our absence, the police from Rampura Phul ransacked our house and removed all our belongings. The village panchayat was not let anywhere near the house. No seizure report was prepared and handed over to the panchayat or anyone else. I, my mother and father were kept in Sardulgarh police station for 12 days. But my husband was moved to Phul police station on October 29. The SSP was present there. He ordered my husband’s release on October 30, telling him to forget about his marriage to me and leave India immediately, which he did the next day. In the meantime, the village panchayat came to know of our detention at Sardulgarh and they came there to rescue us but we were removed stealthily to Boha police station. At Boha, I was not given even water for washing under SSP’s order. We were maltreated there [the woman was reluctant to give details of the mistreatment].

After eight days, the three of us were removed from Boha to CIA Bathinda. My mother and I were released from three weeks of illegal detention. My father was kept in CIA Bathinda and at Phul and was produced in a court on November 30. A case was registered against him. While we were in custody, Jaswinder Singh, who happens to be brother of my father, telephoned DGP KP Gill at telephone No. 753-546840 requesting him to intervene but Gill told him that Kahlon did not listen to his advice. We have learnt that the SSP had picked us up because on October 23, 1991, some militants had abducted six traders of Phul and the police suspected my 16-year-old brother Harpinder Singh Goldy aka. Pamma’s hand in the abduction. My brother had gone underground in the wake of police harassment in August 1991 when he was studying in class 10 + 1 .

I have gone underground to escape further humiliation and torture because the SSP Harkishan Kahlon is after me, for unknown reasons. Because of the “treatment” given to my husband, he has left me and does not wish to keep me as his wife any longer.”

Bibi Amandeep Kaur stayed in hiding until January 21 1992. The police then played a sinister game. They asked him to return to her house, returning all her property and insisted they would not harass her any more. They also bailed her father the day before. Jaswant Singh did not trust the police so he did not return home. Amandeep Kaur did. When her mother was out, two gun men with masked faces came on behalf of SSP Bathinda, Kahlon, and shot Bibi Amandeep Kaur dead on January 21st at 7:30pm.

Information given by the family of Shaheed Bibi Amandeep Kaur 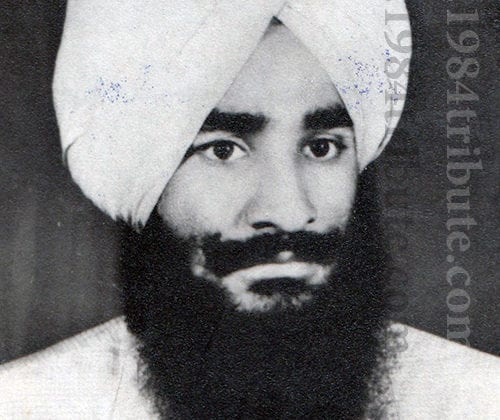 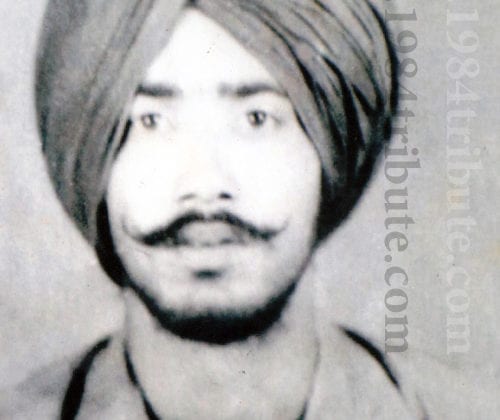 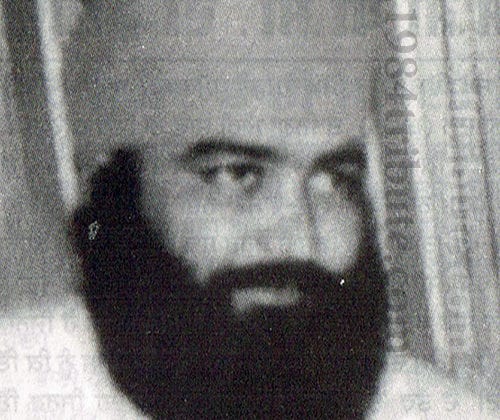