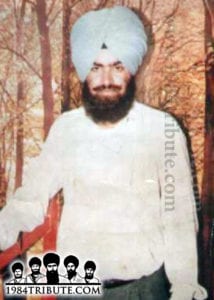 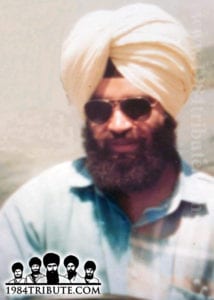 There is a long list of names that have contributed towards the Sikh Struggle, which was started by the greatest Shaheed of the 20th century, Sant Jarnail Singh Khalsa Bhindranwale. Shaheed Dr Gurpreet Singh Virk is one of the names in that long list of panthic shaheeds. The Sikh struggle was for equal rights, justice and for the truth, for which many youngsters played their part by sacrificing their lives, Dr Gurpreet Singh Virk is also one of them, who has played a special role. Bhai Sahib was one of the first who were at the front and then stood back and part took in the fight. As well as part taking in Sikh Freedom Movement, Bhai Sahib also worked for the as a veterinary doctor, which was a government job.

Dr Gurpreet Singh Virk was born in the house of Sardar Joginder Singh and Mata Harbans Kaur on the 27th of April 1962. Bhai Sahib had a BVSCI degree qualification. Within the Khadku establishment and in Bhai Sahib’s student life, Bhai Sahib was known as Sant and Dr Brown. Bhai Sahib’s Anand Karaj happened on the 16th of August 1987, with Bibi Parminder Pal Kaur. At that time Bibi Parminder Pal Kaur was working as SDO (Sub Division Officer) in Ludhiana.

Until Bhai Sahib got caught, Bhai Sahibs family were harassed and tortured by the police for a year and a half. The first time the police raided the house Bhai Sahib was at his in-laws along with his wife, so Bhai Sahib never got caught. Due to this raid Bibi Ji had to leave her SDO job and to make matters worse hell broke loose on the family. Every day the police would come to Bhai Sahib’s in-laws house and his home, they would threaten the family to produce Bhai Sahib in front of the police.

One day the police came to arrest Bibi Ji and her mother, Bibi Ji’s family bribed the police officers with 1Lakh rupees, but this made the situation worse, the police had now found a way of retrieving more money from the family. The police finally stopped their harassment when they realised that the family now have nothing left other than their house. The police emptied out the families bank accounts through bribes, the family even had to sell some plots, so they could give the money to the police. Then came the turn of Bibi Ji’s brothers, who were regularly taken to the police station and tortured, this had become a regular thing for the police.

Bhai Sahib along with his wife moved to Calcutta. Both of them had lost their government jobs. A family that was doing financially well, was on the verge of poverty. After a while the couple came back to Punjab, where Bhai Sahib continued with his Khadku activities. Eventually the day came, the day every singh or singhni involved in freedom struggle faces. Bhai Sahib’s was arrested, he was arrested in the city of Ludhiana near the Manju cinema, the merciless torture of the police started. The police tried to pressurise Bhai Sahib through torturing him in many different ways to speak out about his fellow Khadku companions, but Bhai Sahib never uttered a word. On the other hand the family was unaware of all this. The police didn’t stop by as regular, they would come after a week, then after two weeks and then a month, Bibi Ji then became suspicious that something very bad has happened. Bhai Sahib was arrested towards the end of January in 1989 where he was in police captive for a good few weeks, in the end the police killed Bhai Sahib in a fake police encounter.

Just 5 months after Bhai Sahib attaining Shaheedi, Bibi Ji gave birth to a baby girl in the month of June, Bibi Ji’s mother in law sent Bibi Ji to her maternal home along with her baby. To provide for her child Bibi Ji sat a B.AD examination which she passed and through the Shiromani Gurdwara Parbandik Committee (SGPC) of Ludhiana, she got a job in a public school in Nankana Sahib as a teacher and her salary was 1,000 rupees per month. Alongside working Bibi Ji sat an LLB examination which she passed and she learned to read, write and speak French which she became an expert at. Bibi Parminder Pal Kaur Virk started organising Sikhi lectures and Sikhi based challenges such as turban tying and memorising Gurbani, but the school principle and committee became jealous and would complain about Bibi Ji. In them days a member for the committee school board in Fatehgarh Sahib, director Gurmohan Singh Walia was visiting the school and one by one he was interviewing the teachers. When Bibi Parminder Pal Kaur Virk’s turn came, he told Bibi Ji that she would need to go to his office in Fatehgarh Sahib, Gurmohan was a Sikh with Hindu mentality, who didn’t believe and respect the Singh’s who attained Shaheedi, the singhs who tried to free the Sikh Kaum from the shackles of slavery. Instead Gurmohan Singh considered our panthic shaheeds as terrorists, so there was no way he was going to show any respect for the widow of a Shaheed Dr Gurpreet Singh Virk. Gurmohan conducted a background search on Bibi Ji and she got suspended from her job, which is still the same today. Legally Gurmohan Singh never had the right to run an investigation on any teacher. Gurmohan Singh’s job was to raise the moral of the teachers but he was doing the opposite. When Bibi Ji was suspended her monthly income was 14 thousand rupees. Bibi Ji had all the documents as proof of this injustice.  Throughout a 3 year period Bibi Ji wrote several letters to Avtar Singh Makkar and the school trusties, Avtar Singh Makkar showed his true colours, he tried to bribe Bibi Ji so she would keep her mouth shut, she was offered a job as the school director and her wage would be 35 thousand rupees per month, Bibi refused the offer. When all the doors of justice were closed shut, Bibi Ji pleaded her case to the Jathedar’s of Sri Akal Takhat Sahib.

One evening at Sri Akal Takhat Sahib, the Singh’s were getting ready to eat their Langar, just then a Brahman came crying to the Singh’s that a Nawab from their area has kidnapped his daughter, great was the Jathedar of Sri Akal Takhat Sahib at that time, he ordered the Singh’s to go and bring back the Brahman’s daughter and to have their Langar once they have returned, the Singh’s brought back the Brahmin’s daughter and killed the evil Nawab. After reading this story Bibi Ji had decided to take her matter to Sri Akal Takhat Sahib to get justice, she took along another 20 Singh’s with her and had her documentation as proof, when she arrived the current Jathedar Giani Gurbachan Singh carefully listened to Bibi Ji’s story and told her to come back again. 10 days later Bibi Ji went back to Sri Akal Takhat Sahib, the decision that the Jathedar had announced put the whole Kaum in shame. Giani Gurbachan Singh told Bibi Ji to go to Makkar’s house and you will get a job. Bibi Ji had went to the Jathedar in the hope that justice will be served but when she heard his reply Bibi Ji broke down in tears on the spot. Whatever reason the Jathedar may give today in regards to his response, but the question then arises that if Bibi Ji had to go to Makkar’s house to get her job back from him then what is the point of Giani Gurbachan Singh being a Jathedar? Isn’t he demeaning the prestige of the Sri Akal Takhat Sahib under the pressure of politics?

Today when Bibi Ji is asked why she hasn’t remarried, since Sikhi isn’t against remarriage, Bibi Ji replies that even though Bhai Sahib may physically not be present before her but she is proud that he has sacrificed himself for the Kaum, to free the Kaum from the shackles of slavery, and is proud to be the widow of a Shaheed. She also said that Bhai Sahib has never left her because a Shaheed never dies. Where these families have lost their husband, father, son, daughter, it’s the duty of every single Sikh to support these Shaheed Families. 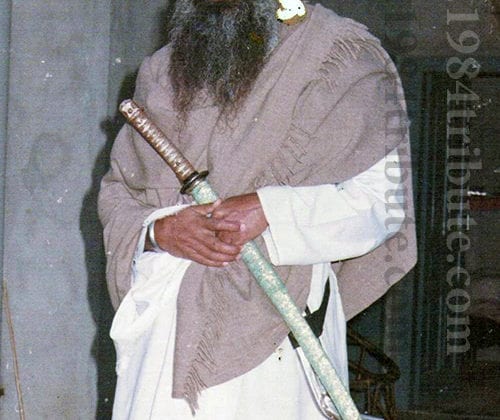