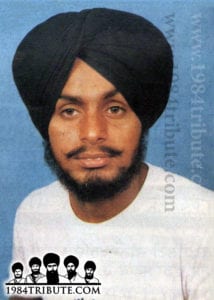 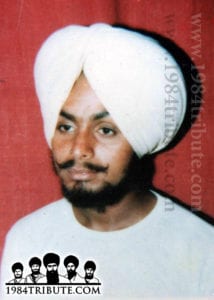 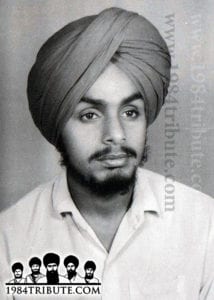 Shaheed Bhai Rupinder Singh Rupi was born on 28th February 1968, in the house of Bhai Rajinder Shera and Bibi Gurbinder Kaur in Phagwara. Bhai Sahib was beautiful, charming and was liked by everyone. Whoever Rupi was associated with was treated like family.

Bhai Sahib studied at Govt. School in Phagwara and left studies when he was in 8th class. Teachers from the school wanted Bhai Sahib back in school, but Bhai Sahib loved farming and didn’t return back to school. Bhai sahib fully paid for his tractor in 18 months, where as it take 7yrs for an average farmer to fully pay for the tractor. Rupi was a hard worker, believed in giving happiness to his parents, and always obeyed them. Bhai sahib would always go to his local gurudwara with his friends and did sewa, he had so much love for the panth from an early age.

1st June 1984, Rupi with friends took the harvested wheat to Amritsar with sharda, to give to Harmandir Sahib langar. Same day at 12:45 when the Indian army fired the first bullet towards Harmandir Sahib, Bhai sahib was at the gate of the complex, the army did not let Bhai sahib and many other singhs to go inside. So Bhai sahib did his matha tekh from outside, and when he went back to his friends he informed them of Bhai Mengha Singh Babbars Shaheedi at Baba Atal Morcha. When Bhai Sahib return home, he would always talk about Sikh history to his ‘Baba Ji’, who was part of the Gaddar Lehar and took part in Jeto Ka Morcha. Baba Ji would tell and explain history to Bhai Sahib, sometimes Baba Ji would get emotional talking about his experiences. Slowly Baba Ji prepared and helped his grandson [Rupi] get ready for the Sikh movement.

End of 1984, Bhai Rupinder Singh Rupi’s sewa for the singhs had started. Doing langar di sewa and delivering messages for the singhs. The rivers Beas and Satluj could not stop Bhai sahib from delivering the messages, all the singhs use to call him ‘furti’ [actively fast]. Rupi told the singhs, “My fields give more crops when I do the sewa of singhs.” The singhs treated Bhai sahibs home as their own, KCF second general, Bhai Labh Singh loved Bhai sahib as he looked after Gen. Labh Singh when he was ill.

After being tortured blindly, Bhai Gurdial Singh Dhanal, broke and gave information to police on whereabouts of the singhs. 20th August 1986, roughly 500 police officers had surrounded Bhai Rupinder Singh Rupi’s house. All the singhs had left beside the women of the house. 28TH August 1986 Bhai sahib’s father, Bhai Rajinder Singh Shera was arrested and blindly tortured. Akaal Purakh did kirpa on Bhai Rajinder Singh Shera, and was released after two weeks without any charges against him. For six months Bhai Rajinder Singh Shera could not walk properly, police would regularly arrest and torture Bhai Sahibs father. When finally Bhai sahib had enough and wanted revenge. Whereas Bhai Sahib’s sewa was of langar and delivering messages, that sewa had now become of picking up arms and fighting against injustice. Bhai Rupinder Singh Rupi had joined Bhai Paramjit Singh Bir [Rajasthan group] and started punishing dusht. Amongst the dusht Bhai sahib punished were police officers, Nirankaris, Shiv Sena and anyone who spoke or did anything against the Sikh panth.

Bhai Sahib had an encounter at the Kaolon River, and with his strength and bravery he got out of the reach of the police, but one singh had been caught and could not take the torture and gave information on Bhai sahib. Jalandher police was after Bhai sahib, in Noormehl and Phillaur, cases had been registered against Bhai Rupinder Singh Rupi. Bhai sahib had a shady character in his group called, Subha Singh Littranwala, he gave information to police which later led to shaheedi of Bhai Paramjit Singh Bir, and forced Bhai sahib to go into hiding. After the encounter Bhai sahib went Pandori and stayed with Bhai Piara Singh. Bhai Piara Singh had told his local sarpanch ‘Khanda’ about Rupi staying at his house, but Khanda passed the information on to the police, which led to Bhai sahib being wanted even more.

Bhai sahib had no choice but to leave Punjab. Police had put people around Bhai sahib that were on government’s payroll. When Bhai sahib tried to go to Delhi in a taxi, the information was passed on to the police by the person who arranged the taxi. Police stopped the taxi and arrested Bhai sahib. For three months Rupi was tortured brutally. Broken bones, broken teeth, electric shocks plus many more evil torture tactics were done on Bhai sahib. The police could not get any information from Bhai sahib, so the police did a fake encounter of Bhai sahib on 11th September 1989. Shaheed Bhai Rupinder Singh Rupi’s shaheedi saroop was never given to the family, when the family stressed the police to at least give the ashes of their son, in return the police gave more abuse. Police had continuously harassed the family of Bhai sahib, India was not a safe place. Now Bhai Rajinder Singh Shera father of Bhai Rupinder Singh Rupi is living in the UK. We will never forget the sewa that this family did for the whole panth. 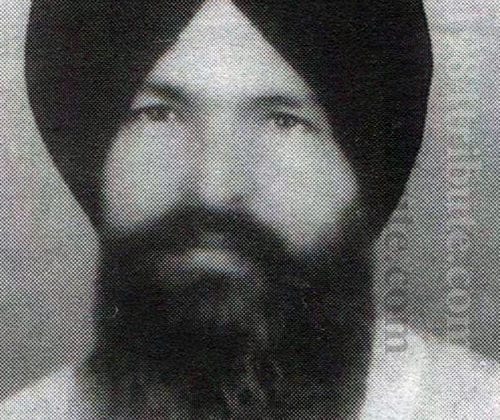