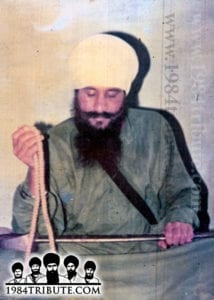 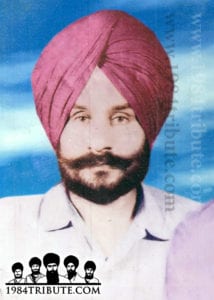 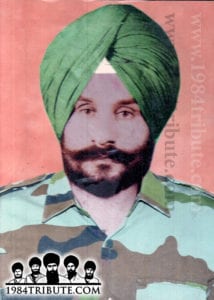 Bhai Rashpal Singh Fauji was born in the year of 1946, in the house of Sardar Amar Singh who made his living from working on his farms and from the womb of Mata Bans Kaur in the village of Raur Khehra, near Vandala Bangar. Bhai Sahib had an older brother, Bhai Avtar Singh and a younger sister Bibi Kashmir Kaur. Bhai Sahib had completed his studies up to 8th class at a government school in Vandala Bangar, after which he started helping his father with farming. At the age of 20, in the year of 1966, Bhai Sahib enrolled himself into the Indian Army. In 1967 Bhai Sahib got married to Bibi Rajwinder Kaur from the village of Kang, near Dhariwal. In his family life Bhai Sahib witnessed the birth of his 6 children. Bhai Sahib was a dedicated devotee of the Gurudwara. Due to Bhai Sahib being in the army he was not Amritdhari but he still recited and listened to immense amount of Gurbani and also knew many prayers by heart.

During 1980, Sant Jarnail Singh Ji Bhindranwale started the Dharam Yodha Morcha in whole of Punjab to ask for the basic rights of the people and Sikhs were giving their voluntary arrest to show support for the Anandpur Resolution. From there on Bhai Sahib started supporting this cause from heart. During this time Bhai Sahib went Sri Darbar Sahib many times and met Sant Jarnail Singh Ji Bhindranwale and listened to Sant Ji’s views. Bhai Sahib soon trusted the cause and along with his fellow Sikh soldiers from the army gave their unlimited support to Sant Ji but Sant Ji said, “Singhs you carry on doing your duties in the Indian army and continue to do Ardas for the Chardikala of the Panth. Yes, if the government attacks Sri Darbar Sahib then you should answer back to this government by leaving your barracks and protecting your religion at all means.”

In the beginning of 1984, the situation between the Indian Government and the Dharam Yodha Morcha started to heat up, Bhai Sahib left his job and came back then the unthinkable act was done by the Indian Army. Sri Harimandir Sahib was attacked and thousands of Sikhs were killed on one of the holiest grounds of the world. Many Sikhs including Bhai Sahib were hurt deep down and wanted to contribute to getting Khalistan, a free Sikh homeland with their lives. After the attack on Sri Harimandir Sahib, Bhai Sahib got in contact with his old friends he knew in the army, most of these soldiers had retired and some had abandoned their posts in the army after the attack on Sri Harimandir Sahib. This group of ex-Indian soldiers vowed to avenge the desecration of Sri Harimandir Sahib. Names of some of the Singhs in this group were Bhai Balvir Singh Fauji and Bhai Sukhdev Singh Fauji both were brothers from the village of Lakhuwal Ramdas, Bhai Ajit Singh Fauji from a village in Gurdaspur, Bhai Paramjit Singh Fauji from the village of Rosian. Bhai Sahib and these 4 Singhs crossed the border into Pakistan from Dehra Baba Nanak.

In Pakistan Bhai Sahib established links with General Labh Singh, Bhai Harjinder Singh Jinda, Bhai Sukhdev Singh Sukha, Bhai Wassan Singh Zaffarwal. Bhai Sahib and fellow Singhs joined Khalistan Commando Force and did sewa of training newly recruited Jhujaru Singhs as they had previous experience from the time in the Indian Army. After a year in Pakistan, Bhai Sahib returned back to Punjab along with other Jhujaru Singhs. Bhai Sahib returned to Punjab with one mission, as Sant Jarnail Singh Ji Bhindranwale said to move towards a Sikh Homeland, Khalistan. Bhai Sahib and the fellow Singhs wanted to teach the evil Hindu regime that Sikhs are not slaves. Bhai Sahib jumped into the armed battlefield under the command of General Labh Singh during the armed struggle. Bhai Sahib was blessed to have done sewa of the Sikh Panth with brave and fearless warriors of Dhan Guru Gobind Singh Ji Mahraj, Jhujaru Singhs like Bhai Sukhdev Singh Sukha, Bhai Harjinder Singh Jinda, Bhai Gurdev Singh Usmanwala, Bhai Gurnam Singh Bandala, Bhai Gurdev Singh Satia, Bhai Kartar Singh UP Raur Khehra, Bhai Jaswant Singh Raur Khehra, Bhai Bawa Singh Raju Bela, Bhai Gurcharan Singh Chardikala and many more. Bhai Sahib was known as one of the pillars of the Sikh Freedom Movement. As well as punishing many anti-Sikh elements, Bhai Sahib also had many encounters with the Indian security forces and everytime Bhai Sahib would escape unharmed after causing destruction upon the enemy.

After coming from Pakistan, Bhai Sahib took Amrit from Panj Pyare of Chownk Mehta. Bhai sahib was very close to Baba Thakur Singh Ji and Baba Kunan of Nanaksar. Baba Thakur Singh Ji treated Bhai Sahib like one of his sons Bhai Sahib was also made a General of Khalistan Commando Force. During all this time Bhai Sahib’s family were going through daily harassment and blind torture at the hands of the Punjab police. As well as family members, Bhai Sahib’s relatives were not spared also. Bhai Sahib’s 70 year old father-in-law Sardar Bakshish Singh was arrested by Punjab Police and taken to an Interrogation centre where he was blindly tortured. Sardar Bakshish Singh was beaten, water boarded, hung upside down, given electric shocks to his ears and genital areas, had his nails pull off. After the torture Sardar Bakshish Singh attained Shaheedi in police custody. Bhai Sahib’s sister-in-law’s son, Bhai Manjit Singh from village Lalpura was killed in a fake encounter by the Punjab police in Gurdaspur and after thrown into the Raavi River. Bhai Manjit Singh was 25 years old and had completed his vetenary course and was due to start a new job. Bhai Manjit Singh was also married and had two children. Even after all the injustices of Indian security forces upon Bhai Sahib’s family, he remained in high sprints and continued to do sewa within the Sikh Freedom Movement.

The Punjab police had set 10 lakh rupees reward on Bhai Sahib’s head. During the year of 1988, Bhai Sahib was arrested but the senior Singhs of Khalistan Commando Force managed to pay off officials to have Bhai Sahib released on parole. In May 1993, the Sikh Freedom Movement was slowly dying as most of its Generals had attained Shaheedi. The Punjab police had destroyed many of Bhai Sahib’s hideouts. On the 2nd of May 1993, while Bhai Sahib was underground he visited his village of Vandal Bangar and was resting at someone’s house. Now the traitors had shown their disloyalty by giving the unarmed Bhai Sahib up to the police. Bhai Sahib was brutally tortured by the Punjab Police. The enemy passed red hot metal rods through Bhai Sahib’s legs, his hands and forehead was electrocuted, the ghotna (wooden rollers) was done to dismantle Bhai Sahibs knees, his legs were pulled apart. In the end Bhai Sahib’s body could not take the torture and as a result Bhai Sahib attained Shaheedi.

The frustrated police officers tried to get Bhai Sahib to name the few remaining Jhujaru Singhs of Khalistan Commando Force that were still in the declining armed struggle and also asked for the whereabouts of the weapons but throughout the whole torture Bhai Sahib recited Gurbani and did not give the Punjab Police any information. After the Shaheedi of Bhai Sahib, the family were not given the body. Baba Thakur Singh Ji did Bhai Sahib’s last Ardas and told Bibi Rajwinder Kaur to accept the shaheedi of Bhai Sahib as a Hakam of Waheguru. Even till today people in and around Bhai Sahibs area still have lovable memories of this great Shaheed. 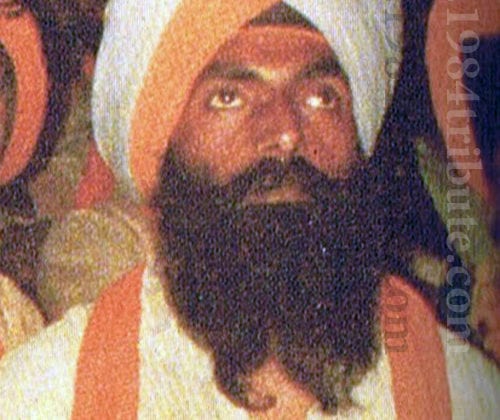 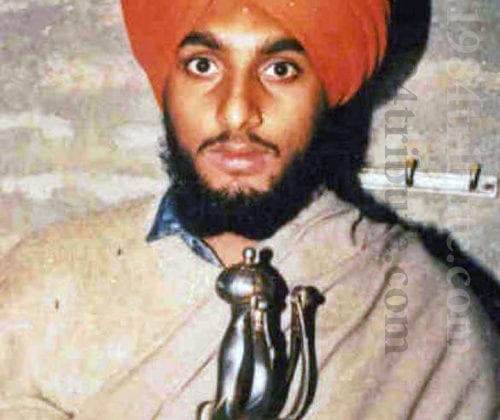