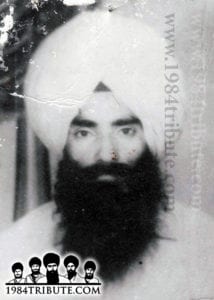 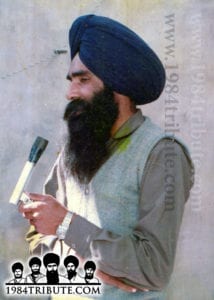 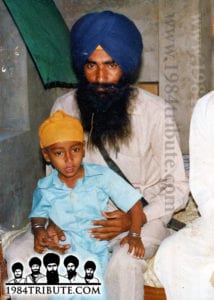 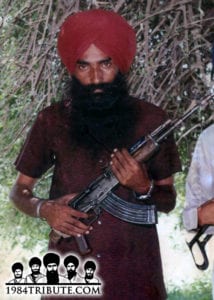 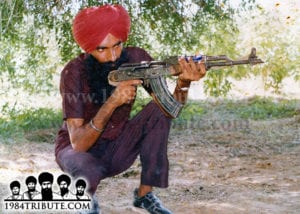 Bhai Gurmail Singh Babbar was in the house of Sardar Joga Singh and from the womb of Mata Ajmer Kaur in September 1957 in the village Raipur. Bhai Sahib had 2 brothers and 2 sisters also. Bhai Sahib completed his primary education at the local school of Raipur and later passed his metric with flying grades. Due to Bhai Sahib having great grades from his studies, Bhai Sahib was chosen as the secretary of the village society by the locals. From childhood, Bhai Sahib was into Sikhi and always prioritized everything around the sewa of the gurudwara. Bhai Sahib loved to go to kirtan smagams and Bhai Sahib would also persuade the villagers to go with him. In April 1978, when 13 singhs were killed and more than 150 Sikhs were wounded by the guards including Punjab police of the Narakhdharis, Bhai Sahib had started feeling suffocated staying at home and became depressed. In 1982, Bhai Sahib met the Khadku Singhs at Sri Harimandir Sahib and stayed here many times with the singhs of Babbar Khalsa. By the time Indian government ordered the army to attack Sri Akaal Takht, Bhai Sahib had become a full time Khadku Singh of the Babbar Khalsa group and started taking part in some of the bod actions.

When we meet the families of the shaheed singhs and singhnia to get details to put a jeevani together, the family gets really happy to know that their family member who had attained shaheedi will be in the panthic history and that the world will get to know about these shaheeds. When we entered Raipur and stopped to ask directions to Bhai Sahib’s house, the locals would start telling us stories of Bhai Sahib. When we asked a woman standing on the side of the road about Bhai Sahib, so we could get an idea of the villagers thought of Bhai Sahib, tears came from her eyes and she told us, “Brother, Secretary wasn’t only the brother of the local sisters, but he was the older brother of all 5 villages of this area, now we all have lost our caring brother.” It’s been 14 years since Bhai Sahib’s shaheedi, but the locals of the area and the surrounding villages still have memories of Bhai Sahib as he still is alive. The political leaders use to beg Bhai Sahib for support but now, as Bhai Sahib has attained shaheed, no panthic or political leaders have supported the family, instead they call our panthic shaheeds looters and gangsters. An old man beside the lake of Raipur, Sardar Tara Singh told us, “Look at his house and look at his family, if secretary was a looter than whom was he looting for? No one in this area can call Bhai Gurmail Singh Secretary a bad man, if someone does say that then I would cut my head off.”

Bhai Sahib left home to contribute his life in the Sikh Freedom Movement. Soon the cruel police of Punjab soon targeted Bhai Sahib’s family and started harassing each member of the family to get information of Bhai Sahib. All most every family member and relatives of Bhai Sahib aced torture at the local CIA HQ. Bhai Sahib’s brother, Bhai Gurjant Singh still suffers from great amount of pain today and can’t work due to the blind torture of the Punjab police, but Bhai Gurjant Singh told, “My brother faught for the rights of the Sikhs, not for his own rights. Gurmail didn’t do anything wrong and that’s why I’m proud of my brother, a true Gursikh warrior.” We can see how much Mata Ajmer Kaur loves her son (Bhai Sahib) when we see her continuously hugging Bhai Sahib’s son, Bhai Sukhmelap Singh and his daughter, Bibi Varpal Kaur. Mata Ajmer Kaur told us, “Now these two children are Gurmail for me.” Mata Ji recalled an experience with Bhai Sahib with us, “Once when Gurmail had come home, while he was underground, to see his family, he picked up his daughter in his laps. Varpal was only 4 years old and kept on putting her hands in her father’s pockets. Gurmail laughed and jokingly said to her, there is nothing in these pockets for you, these pockets belong to the panth now.” Today Bhai Sahib’s daughter, Bibi Varpal Kaur is 17 years old and the family can’t afford to send her to school, Bibi Varpal Kaur watches her friends go to school and gets upset as she can’t have the same living standards as her friends. Mata Ji once told her son, Bhai Sahib, “Son, your family needs you, come back home.” But Bhai Sahib replied, “Mother, I stayed with you for27 years, now you look after them and let me do the sewa of the panth.” Bhai Sahib was married to Bibi Manjit Kaur, daughter of Sardar Raj Singh from the village of Billian Wali. Bhai Sahib would tell his singhni “Accept what Waheguru has written in our destiny. I’m sorry for the harassment you will face bit don’t ever give up on Waheguru, he is the one who really cares about you.”

Bhai Sahib’s family are surviving on the money earned from a very small amount of land they have. Bhai Sahib was a part of those Malwa Khadku Singhs, who encouraged Sikhs to become saintly first and then pick up a weapon to become a soldier. Whenever a freedom fighting group had difficulties in completing missions of Malwa area, they would ask Bhai Sahib for support in the mission. Bhai Sahib led many actions in the Malwa area. Bhai Sahib would always think about two singhs that attained shaheedi in Rajasthan in an encounter with the Indian security forces as they were very close to Bhai Sahib, they were Shaheed Bhai Major Singh Narvana and Bhai Baldev Singh Narvana. Some of the singhs that carried out actions with Bhai Sahib were Bhai Gurbhog Singh Banme Kalan, Bhai Balwinder Singh Bullet, Bhai Balwinder Singh Ganga, Bhai Jugraj Singh Rasheen, Bhai Khem Singh Fauji, Bhai Madha Singh, Bhai Harbhajan Singh Mand Falori and many more as Bhai Sahib respected every singh that contributed towards Sikh Freedom Movement, no matter which freedom fighting group they were from.

7th September 1991, Bhai Sahib, Bhai Khem Singh Fauji Badal Kalan, Bhai Paramjit Singh Fullewala, Bhai Jugraj Singh Rasheen and Bhai Balwinder Singh Ganga were staying the village of Mozian, district Mansa. The police received this information and surrounded the whole village. The police judged the situation and knew they needed more back up, so the Punjab police called the CRP and BSF to support them in arresting these top generals of the Babbar Khalsa. Now even the birds could not move due to the heavy presence of the Indian security forces. The police ordered the singhs to surrender via a loud speaker, but the singh shouted they don’t want battle the Indian security in the houses as innocent villagers would get killed in the cross fire and the singhs challenged the Indian security forces to an encounter in the farms. The police started firing bullets to force the singhs to surrender, but singhs took cover and made their way to the farms and started an all-out encounter. The police, CRP and BSF were leaving the dead bodies of the fellow officers and ran for their lives. Soon the army was called in to assist these security forces of India, as even the bullet proof tractors were no match to these singhs of Babbar Khalsa. Bhai Sahib ordered the singhs to escape while they can, but the singhs assisted on staying. After forcing, Bhai Sahib managed to make Bhai Balwinder Singh Ganga and Bhai Jugraj Singh Rasheen escape, but Bhai Khem Singh Fauji Badal Kalan and Bhai Paramjit Singh Fullewala stayed behind with Bhai Sahib to push the Indian security forces back for almost 28 hours. At the end on 8th February 1991, roughly about 10 o’clock at night, Bhai Sahib, Bhai Khem Singh Fauji Badal Kalan and Bhai Paramjit Singh Fullewala attained shaheedi fighting the Indian cowardly forces till their last breath.

When a singh or a singhni of Babbar Khalsa attains shaheedi, the family of shaheed is given a gold medal and a sword as the mark of respect and honour. On the sword there is a stamp on its blade of, Babbar Khalsa International, with a quote below of, ‘Bullets will be fired, and enemies of the Sikhs will be punished’. The police were informed of these gifts of respect and honour were given to Bhai Sahib’s family. The police went to Bhai Sahib’s house to arrest his brother but luckily he was not home. One day as Bhai Sahib’s brother travelled on bus from Talwandi Sabho, the police arrested him and kept him at the Talwandi Sabho torture centre. Bhai Sahib’s brother was brutally tortured for 13 days. The police later took the sword and the gold medal from the family. The police had now become the enemy of everything that breathed in Raipur. The police would arrest the people of Raipur and blindly torture them and in some cases ill them in fake encounters. The Babbar Khalsa had enough of the injustice on the Sikhs of Raipur and on 13th April 1992, in bomb blast in the village of Bajewala, they answered the Indian security forces.

The police were not giving the bodies of the shaheeds to their families but after great pressure put on the police, the bodies of shaheeds were given to the families. These warriors were cremated according to the Sikh code of conduct in the village of Raipur. The locals have not a single bad word to say about any of these shaheeds, even due to the torture the innocent villagers faced by the police. The Sikh nation salutes this shaheeds. 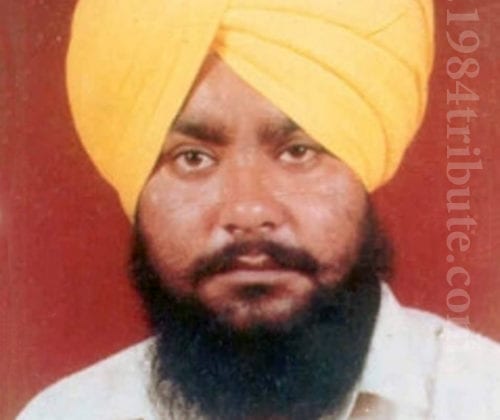