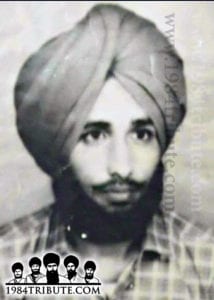 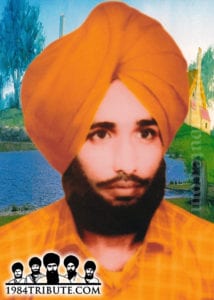 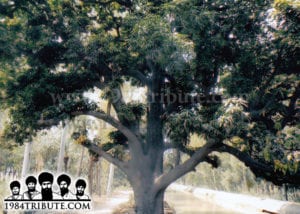 Bhai Waryam Singh Khappianwali was born in the house of Jathedar Baba Harnam Singh and from the womb of Mata Jagtar Kaur on 13th April 1965 in the village of Khappianwali, district Faridkot, now district Mukatsar. Khappianwali is 15km from Mukatsar on Guru Har Sahai Road. Bhai Sahib was the youngest of 5 brothers, Bhai Gurbachan Singh, Bhai Charan Singh, Bhai Sajjan Singh, Bhai Nishan Singh and Bhai Gurnam Singh. Bhai Sahib studied at a local school of Khappianwali till 5th class, passed 8th class in a school in village of Gulabe Wale, then studied up till 10th class at a government high school in Mukatsar and finally studied up till 13th class at Government College.

Bhai Sahib was studying in 13th class when Indira Gandhi attacked Sri Harimandir Sahib with tanks and cannons, 37 other gurudwaras were attacked and Sikhs that came to pay their respects on Shaheedi Diwas of Guru Arjan Dev Ji. Indian army killed thousands of innocent Sikhs and arrested, tortured, jailed and even killed baptised Sikhs around Punjab. Bhai Sahib went to do Darshan of Sri Darbar Sahib, Mukatsar, but the Indian army arrested him, after much torture and questioning Bhai Sahib was locked in Faridkot Jail for no reason at all. Bhai Sahib was in prison for 10 months, until his family paid his bail to free him. 4-5 months later the police tried framing Bhai Sahib in planning murder of Sessions Judge Mirchian, also in this case the police informer Joginder Singh was a witness and lied in court. Judge Mirchian hated Sikhs, he gave baptised Sikhs unfair sentences and let free the police officers, who were tried for killings of innocent Sikhs. The police managed to convince Judge Mirchian into sending Bhai Sahib to Jail, Bhai Tarsem Singh Kohar, Baba Ranjit Singh Dyalgarh were also framed in this case. Bhai Sahib spent some of his sentence in Faridkot Jail and was later moved to Bathinda Jail. Bhai Sahib’s family appealed for his bail and were granted a bail after paying huge sum of money. SHO Bhagwan Singh found out that Bhai Sahib was going to be released and came outside Bathinda Jail to arrest Bhai Sahib. Bhai Sahib’s family was also outside the jail to take him home. Bhai Sahib was informed by a jail guard that SHO Bhagwan Singh was outside to arrest him. Bhai Sahib sent a message to his family through the jail guard, that Bhai Sahib’s bail has been cancelled and the family has to go Chandigarh to re-appeal for bail. The SHO Bhagwan Singh overheard this and saw the family go back home. SHO Bhagwan Singh believed this act and went back to his police station. Bhai Sahib came out of jail later that evening just before SHO Bhagwan Singh returned back to the jail and told the guards to bring Bhai Sahib out, but the jail guards said that Bhai Sahib left earlier as his family paid bail. SHO Bhagwan Singh was angry upon hearing this and on being fooled by Bhai Sahib’s father, Jathedar Baba Harnam Singh. Bhai Sahib never went home ever again knowing that the police will not let him live in peace at home. Bhai Sahib was engaged to a girl from the village of Panjvi. The police of Panjvi also harassed the family of this girl. Bhai Sahib told his family that doesn’t want to get married to the girl he is engaged to, as they there is no knowing of when Bhai Sahib will attain shaheedi as the dogs of the Indian government are after him. Bhai Sahib was always calm and relaxed but the police did not allow Bhai Sahib to carry on with his life this way. The police would regularly trash the house of Bhai Sahib and arrest his father and even tortured Jathedar Baba Harnam Singh. As Bhai Sahib was living away from home, he came in contact with Khadku Singhs and joined the Sikh Freedom Movement, the actions of Bhai Sahib were praised by the Sikhs of Punjab and abroad when articles were written with his name.

On 18th March 1986 Bhai Jagjit Singh Rode, brother of Sant Jarnail Singh Ji Bindranwale was killed brutally by the Indian security forces. Bhai Jagjit Singh Rode was tied to railway tracks by the cowardly Indian Security Forces and eventually ran over by a train. The whole Sikh nation mourned the shaheedi of Bhai Jagjit Singh Rode. Trucks, Buses and tractor trolleys full of Sikhs came to the village of Rode to pay respect to the fallen soldier. When a truck full of Sikh sangat left Mukhatsar to go to Rode, but the truck was stopped the Hindu extremist group, Shiv Sena. Bottles of acid were thrown at the truck carrying Sikhs and racist slogans were chanted by Shiv Sena workers. Anyone who tried to calm the Shiv Sena workers down were also abused, for example SDM of Mukhatsar had his face burnt with acid and his teeth were broken after he tried to calm the Shiv Sena down. The police stood like audience and watch this one sided attack on Sikhs by the Shiv Sena workers. The Punjab so called Panthic government of Surjit Barnala did not punish any of the Shiv Sena workers and the Sikhs were angered by this, in fact this was just another sign of slavery.

In August 1986 a bus was stopped and all the Hindus were killed. No one took responsibility of this action, which is very un-Khadku like. Whenever Khadku Singhs did any action the following day newspapers will print the statements of freedom fighter groups taking responsibility. The police blamed Bhai Sahib, Bhai Tarsem Singh Kohar, Bhai Harjinder Singh Jinda Arjunpur and Bhai Gurjant Singh Budhsinghwala.

The police was now even hungrier to get the Khadku Singhs. The news got to Bhai Sahib’s family that Bhai Sahib’s name is being mentioned in this case and that the police might come anytime and harass the family. Bhai Sahib’s family left home before the police came. The police were angry after not finding no one at the house, so they burnt the house down, they destroyed the electrical water pumps which pumped water to the farms of the family and also let the cows and buffaloes loose. The police heavily hunted the family of Bhai Sahib and manage to arrest Bhai Sahib’s older brother Bhai Charan Singh and tortured him blindly. Even today Bhai Charan Singh suffers from physical and mental conditions due to the torture.

Punjab police put a reward of 1 Lakh Rupees on the head of Bhai Sahib. Julio Francis Rebeiro, head of Punjab police gave his troops a list of 36 Khadku Singhs he wanted dead or alive, Bhai Sahib’s name was also on this list along with Malva Kesri Khalistan Commando Force Jathedar, Bhai Tarsem Singh Kohar, Baba Ranjit Singh Dyalgarh, Bhai Hussan Singh Hussana, Bhai Harjinder Singh Jinda Arjunpur, Bhai Gurjant Singh Budhsinghwala and other top Khadku Singhs. Khadku Singhs were doing some of the big actions that were taking the Sikh nation closer to Khalistan, Bhai Sahib’s name was and is said with great respect and honour. The police labelled Bhai Sahib a dangerous terrorist and on the other side Bhai Sahib was labelled the diamond of the Sikh nation who kept the turban of the Sikhs high.

Bhai Sahib was travelling on a bus, when a police informer told the police of Ferozpur which bus Bhai Sahib was travelling on. The police stooped and surrounded the bus. The police shouted, “The guy who calls himself top Khadku Singh must step out of the bus immediately or we know which seat he is sitting on.” Bhai Sahib replied, “I’m unarmed so this isn’t much of a battle, but if I had a gun then none of you police officers will be standing. I am Waryam Singh of Khappianwali, and I’ve done what I could do for Khalistan, now you do want you want.” As Bhai Sahib got off the bus, the CRP officers and the police of Ferozpur took Bhai Sahib away in jeeps. The passengers of the bus saw this and the news of Bhai Sahibs arrest spread all over Punjab like wild fire. Bhai Sahib was bought to Faridkot Police Station, Inspector Sham Sundar tortured Bhai Sahib blindly to get information of other top Khadku Singhs. Bhai Sahib didn’t say nothing beside Waheguru, Inspector Sham Sunder was angry that after all his efforts of getting information had failed and could not get a bigger rank within the police. 31st October 1986, the Faridkot police took Bhai Sahib to the village of Dhepai and tied him to a mango tree beside the river. Then the police and CRP officers emptied their magazines into Bhai Sahib and Bhai Waryam Singh Khappianwali attained shaheedi.

In memory of Shaheed Bhai Waryam Singh Khappianwali, an Akhand Paath Sahib of Guru Granth Sahib Ji was held on 10th November 1986 in Khappianwali. In this shaheedi smagam more than 20,000 Sikhs attended to pay respect to a true saint soldier. This smagam was also attended by father of Sant Jarnail Singh Ji Bindranwale, Baba Joginder Singh Rode, Bhai Chamkaur Singh Rode and Bhai Amrik Singh Mukhatsar. Baba Joginder Singh Rode told the sangat in a speech that Shaheed Bhai Waryam Singh Khappianwali was a jewel of the Sikh nation, his shaheedi will never be forgotten and the mission of Shaheed Bhai Waryam Singh Khappianwali will be completed by Bhai Gurjant Singh Budhsinghwala. Bhai Sahib’s rank was given to Bhai Gurjant Singh Budhsinghwala. Bhai Gurjant Singh Budhsinghwala promised the Sikh nation that he will punish the people who were responsible for the killing of Bhai Sahib. The police were keeping an eye on everything at Shaheedi Smagam of 10th November 1986, but the police did not dare put salts into the wounds of Sikhs. Guru Ka Langar and tea was served to the sangat. The slogans of ‘Bhai Waryam Singh Amar Rahe’, ‘Bole So Nihal Sat Sri Akaal’, and ‘Khalistan Zindabaad’ were shouted at the smagam.

This is how Dhadhi Jatha describes the scene;

Dead bodies of Joginder Singh Sarpanch and 2 of his men were taken out of the gutter by the police and were later sent to hospital for post-mortem. 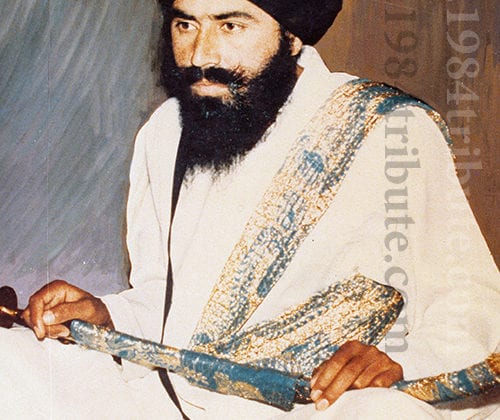