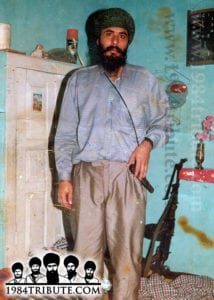 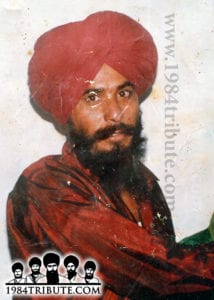 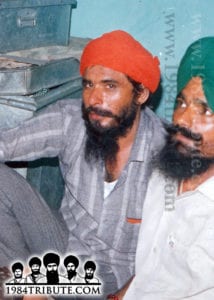 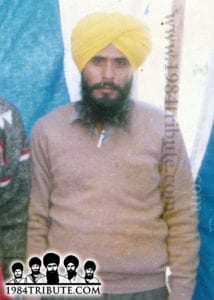 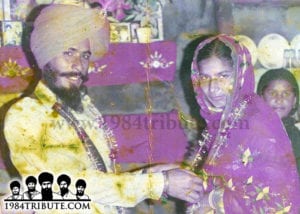 Bhai Ajit Singh Pardhan is amongst the top Jhujaru Singhs from Gurdaspur area, as well as being a feared Jhujaru Singh. Bhai Sahib was also a true Gursikh and had great knowledge of political struggle as well as armed struggle. Bhai Sahib was born in the house of Sardar Hardyal Singh and from the womb of Mata Gurmeet Kaur in 1963 in the village of Qaddian, Dera Baba Nanak district Gurdaspur. Bhai Sahib studied up to 10th class at a high school in Shahpur Goraya. In 1984, the Hindu led Indian army attacked Sri Harimandir Sahib and Sri Akaal Takht Sahib with tanks and cannons. Bhai Sahib was heartbroken seeing this beadbi happening at the hands of Indian government, Bhai Sahib had now changed and started hating the Indian System that oppressed Sikhs.

At first Bhai Sahib met the known Jhujaru Singhs of Gurdaspur area, such as Bhai Sukhwinder Singh Sukha Kot Molvi, Bhai Ranjit Singh Dyalgarh and Bhai Gurmej Singh Dilwan. Even after destroying Sri Harimandir Sahib and Sri Akaal Takht Sahib and killing Sikhs, the government of India was not satisfied. The Hindu regime had unleashed the Punjab police, CRPF and BSF onto the Sikh youth of Punjab and anyone that spoke in favours of Sikhs. It was this act of oppression upon the      Sikhs that started to give birth to Jhujaru Singhs and put them on the path to attain total freedom or shaheedi. Many Sikh youths of Punjab were made to take up arms and fight in self-defence and to create a safer place for their families and a place where the Sikh religion will not be attacked.

It was in 1985, Bhai Sahib joined one of the Jhujaru groups and started his armed struggle against the Hindu government of India. But soon Bhai Sahib was arrested in Amritsar as he was resting beside a flowing river. For some time Bhai Sahib was transported to different interrogation centres and faced blind torture. In the end Punjab police charged Bhai Sahib with possession of arms and sent him to Amritsar’s Central Jail.

In 1985, Bhai Sahib was released on bail and later acquitted from these cases. Soon after Bhai Sahib’s release, his family got his Anand Karaj done to Bibi Daljit Kaur from the village of Talwandi Goraya. Bhai Sahib had only been married for 3 months when Bhai Sahib was visiting Baba Dera Nanak on some household duties. A brutal police officer of this area, Thanedar Kundan Sio arrested Bhai Sahib. Bhai Sahib was brutally tortured once again and after being charged with many fake cases he was sent to Gurdaspur’s Central Jail. After a year Bhai Sahib’s family managed to have him released through Punjab and Haryana High Court.

Only 2 days after the release of Bhai Sahib, the cruel Thanedar Kundan Sio stormed Bhai Sahib’s house along with his time and told the family to present Bhai Sahib at the police station as soon as possible. This was happening on regular basis, when Bhai Sahib finally had enough and decided to leave home permanently to fight of the slavery upon Sikhs in India. Bhai Sahib also knew that Thanedar Kundan Sio was known for killing Sikh youth of the Gurdaspur area in fake encounters.

Like this in 1990, Bhai Sahib created a new Jhujaru Jathebandi under the name of Khalistan Guerrilla Force and Bhai Sahib was chosen to lead this group. This group under the command of Bhai Sahib entered the battlefield against the corrupt police officers who were killing Sikhs in fake encounters and harassing Sikh families. During this time Indian security forces targeted Bhai Sahib’s family, torturing them and harassing them every other day. Even Bhai Sahib’s in-laws were targeted, but Bhai Sahib remained in high spirits and continued to walk on his chosen mission of Khalistan. These are some of Bhai Sahib’s uncountable actions, attacking and raiding Kalanur police station, assassination of Anokha Hawaldar, attacking and raiding Shapur Goraya police station. Other than these actions Bhai Sahib also had many encounters with Indian security forces and after causing heavy damage to the enemy Bhai Sahib would escape.