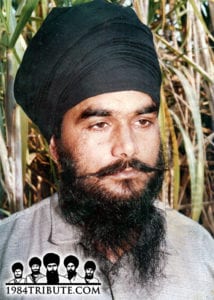 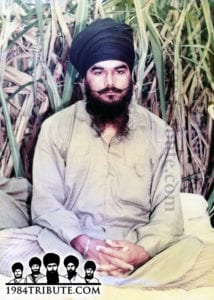 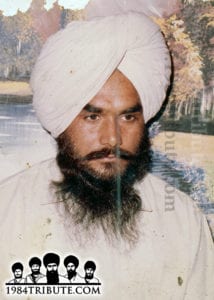 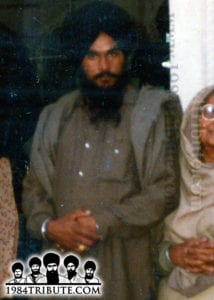 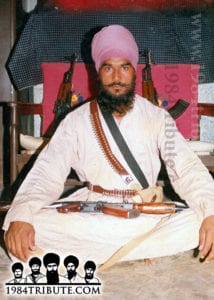 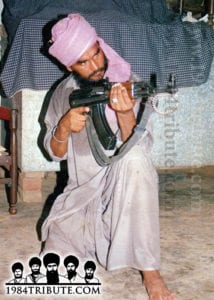 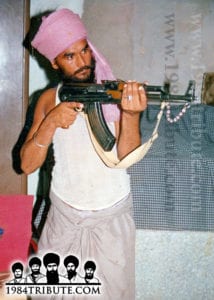 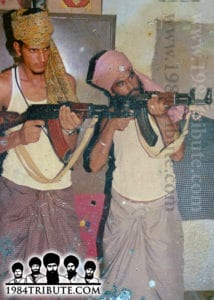 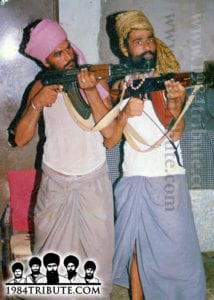 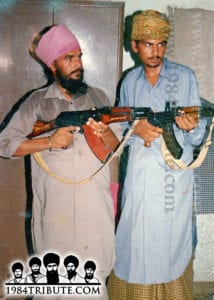 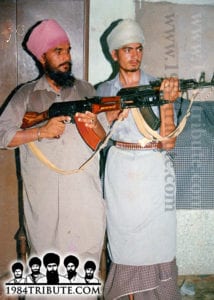 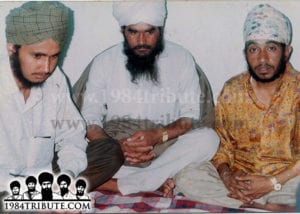 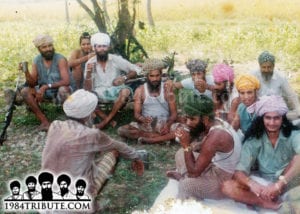 In the struggle for free Sikh homeland which was started by Sant Jarnail Singh Ji Bhindranwala, has unearthed many rare diamonds that contributed in this movement with their lives. These shinning warriors became even more valuable to the panth after their shahadat. Amongst the thousands of Sikhs that joined the movement was Bhai Gurbachan Singh Aahlaan.

In such circumstances Bhai Sahib did not go school and from a young age he started working at the family farms. Bhai Sahib was looking after the farms, removing weeds and other plants that damaged the crop, little did Bhai Sahib know that one day he will be removing the traitors and killers of the Sikhs from earth. When Bhai Sahib stepped out of his childhood and into teenage, the family had moved to Ferozpur district’s Aahlaan village, this village is very close to Sadarwala. Even Bhai Sahib’s family from Mata Parseen Kaur’s side had moved to Aahlaan and started doing farming here.

When the Narakhdharis came out of Delhi and into to commit the disrespect of Sri Guru Granth Sahib Ji, hundreds of Sikhs peacefully protested against this. The police was on the side of the Narakhdharis and the Narakhdhari gangs shot at the Sikhs that were peacefully protesting, killing 13 singhs including Bhai Fauja Singh and wounding 150 plus more. This injustice on the Sikhs had awoken Sikhs all across India. Bhai Sahib’s age at that time was around about 23. Now Bhai Sahib and his Mama Ji’s son, Bhai Mohan Singh started going to Sri Harimandir Sahib regularly. During this time Sant Jarnail Singh Ji Bhindranwala was getting the Sikh youth onto one platform. When Bhai Sahib met Sant Jarnail Singh Ji Bhindranwala he was asked, “Singha, do you know how to use a rifle?” Bhai Sahib answered, “Sant Ji, I don’t know how to use a rifle, but I can use a sword.” Sant Ji then said, “Ok, no problem. To punish the enemies of the panth a sword would be enough, but learn how to use a rifle too.” After this Bhai Sahib started visiting Sant Jarnail Singh Ji Bhindranwala regularly and along with his cousin listened to the speeches at Sri Manji Sahib. Bhai Sahib wanted to stay with Sant Ji and do sewa, but Sant Ji said, “Your time has not come yet, your time come. Until then do the sewa of your parents.” Bhai Sahib and Bhai Mohan Singh had both written their names amongst the list of Marjeeveray. Bhai Sahib was still visiting Sri Harimandir Sahib every other day, when his parents were talking about his marriage. In 1981 Bhai Sahib was married to a daughter of a Gursikh family from the village of Algo Kothi, Bibi Gurmej Kaur. After the marriage Bhai Sahib was regularly visiting Sant Jarnail Singh Ji Bhindranwala.

After year and a half, Bibi Gurmej Kaur gave birth to a son who Bhai Sahib named Ranjodh Singh. Bhai Sahib had made a promise to himself that soon as he had a son, he would dedicate his remaining life to the Sikh struggle, but even then Sant Jarnail Singh Ji Bhindranwale told Bhai Sahib to stay at home and prepare himself for the future. In June 1984, the Indian government put out a curfew in Punjab, laced with tanks and cannons the Indian army attacked Sri Darbar Sahib. Upon hearing this news, no Sikh youth could stay at home knowing their Sri Akaal Takht Sahib was under attack. Bhai Sahib and Bhai Mohan Singh along with other Sikhs tried to break the curfews and make their way to Sri Akaal Takht Sahib, but these unarmed Sikhs were no match to the thousands of heavily armed army and police that was standing at every corner of Punjab. Following the orders of Sant Jarnail Singh Ji Bhindranwale, Bhai Sahib started getting ready for the next phase of the struggle.

Bhai Sahib did not go underground straight away, instead to analyse the situation of Punjab, Bhai Sahib would go to Makhu village to buy a newspaper and even though he could not read, he would ask his 13 year old cousin (daughter of Mama Ji), Bibi Daljit Kaur to read him all the news. Bibi Daljit Kaur would read the news and Bhai Sahib would carefully listen to his niece. Bhai Sahib had great amount of love for his cousin sister and made her his 5thsister. Like this till 1988 Bhai Sahib did sewa secretly from home.

In 1988 Bhai Sahib and family members travelled on the train to Delhi’s Sri Bangla Sahib and do darshan of gurudwaras in Gwalior. At that time Bhai Sahib had one pistol and near Gwalior the police also boarded the train, in fact the same box as Bhai Sahib. Bhai Sahib quickly hid his pistol while the police continued to check the tram, fortunately the police did not get the time to check Bhai Sahib’s luggage. When in Karnataka’s Bidar area Sikh workers were killed mercilessly by the extreme Hindu yobs, the focus of Jhujaru Singhs went towards the Karnataka state. Bhai Sahib did the hard work of tracking one of the killers of the Sikhs in Karnataka, after sending him on one way ticket to hell Bhai Sahib made his way to Sachkhand Sri Hazur Sahib, Nanded.

After that action Bhai Sahib stayed at Sri Hazur Sahib for a while until the singhs of Bhai Nishan Singh Makhu’s group bought Bhai Sahib back to Punjab. In Punjab Bhai Sahib kept active with his actions, one of Bhai Sahib’s actions is talked about when he blew up 2 CRPF vehicles in the village of Zira. Now Bhai Sahib had gone underground, but the love for his 5thsister, Bibi Daljit Kaur remained the same. Bhai Sahib may not have believed in Rakhri due to the Sikh code of conduct, but even then for the happiness of his sister Bhai Sahib would go meet his sister. Then that day also came when his sister, Bibi Daljit Kaur’s marriage was to take place. Bhai Sahib said, “The marriage of my sister better happen on simple terms. We teach others on how a marriage should happen, don’t make it the case where our own do a marriage against our teaching.” The wedding happened on simple terms, now Bhai Sahib encouraged his cousin sister to write the biographies of shaheed singhs also. Following these orders, Bibi Daljit Kaur felt proud to write the biographies of panthic shaheeds. This sister, Bibi Daljit Kaur was very much attached to her brothers, when they met she would say, “Take me with you.” Then Bhai Sahib would answer, “No, you need to stay at home and like a sister you will fulfil our responsibilities after us.”

Like this, days, months and years passed by as Bhai Sahib continued to take part in the Sikh Freedom Movement. The year 1992 came, after many political dramas the government of butcher Beanta came to rule Punjab, now Sikhs were being killed all over Punjab by the forces of butcher Beanta who was the dog of Delhi. To figure out the new government, some singhs left Punjab and saw what was happening in Punjab from outside to get a better idea. Bhai Sahib and Bhai Mohan Singh also went to Sachkhand Sri Hazur Sahib, Nanded. Only one fellow singh knew about the two brothers going to Sri Hazur Sahib, it is thought that this fellow singh had turned into an informant and told the police where the brothers had gone. After getting the information, a special team of Ferozpur police went to Nanded on an aeroplane. Bhai Sahib and Bhai Mohan Singh were staying in one room at the Sra of Sri Langar Sahib. As both singhs rested in their room, the special team of police officers forced the sewadars to open the door. Soon as the door opened the police jumped onto both singhs and arrested them. There was another singh who was in the same room, he too was arrested.

All 3 singhs were arrested and taken to Ferozpur’s CIA staff. The brutal torture began on all three singhs. The SSP of Ferozpur scared of Bhai Sahib as his group had tried to blow up this SSP 3 times but no result came out of all 3 attempts. For 17 days all singhs were blindly tortured for information on fellow singhs. An IB officer who knew the family told the family that the nails of the singhs were pulled out and their eyes were also taken out, only the love for puratan shaheeds and gurbani kept the singhs in high spirits. The police were anxious to get more information of fellow singhs and weapons, but at the same time these singhs did not want to get any singhs arrested. During torture these singhs shouted the slogans of, “Khalistan Zindabaad.” The SSP got annoyed and said, “Not Khalistan, I am going to make Khali (empty) sthan (land).”

In the end on 2ndApril 1992, the IB officer told the family that Bhai Sahib, Bhai Mohan Singh and another singh from the village of Wadha Ghar have been made shaheed by the police in a fake encounter and stressed the family to get to the location of their cremation. The family members were quickly reached the location of the cremation, but before they reached the police had already cremated the singhs. The family members got the ashes of the singhs and flawed them into water. The shahadat of these two brothers had saddened the family, but their sister, Bibi Daljit Kaur as in a really bad state. Bibi Daljit Kaur remembered how she used to read the newspaper for Bhai Sahib and with love Bhai Sahib would call her Guddi. Then she would remember the words of her shaheed brother, “Write the biographies of the shaheed singhs, they should live on in history.”

These words of her brother, Bibi Daljit Kaur has not forgotten till today. She still tries to find shaheed families and write their biographies, she wrote the jeevan of Shaheed Bhai Gurbachan Singh Aahlaan and sent in to the Vangaar bureau. 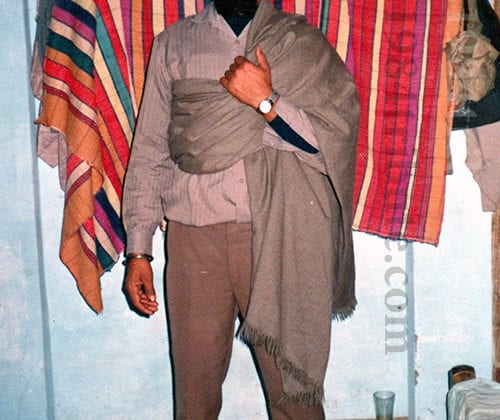