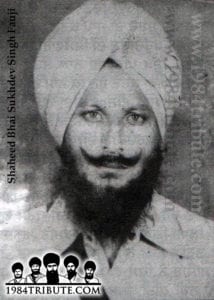 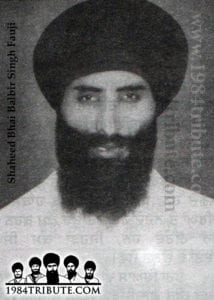 Their eagle eyes defended India from the neighbouring country of Pakistan. Their hands were also on the trigger of their guns, in case someone tried to attack India, but little did they know the India will attack them from behind. India had challenged their religion and attacked their Sikh throne with tanks and cannons. Not only that, the Indian government tried to wipe out the Sikhs and started killing the youth and raping the women. This was that time when they recongnised the real enemy (or the bigger enemy), at this time their guns turned towards the opposite direction and their lives had completely changed. Turning against the country they once faught for and jumping in the battlefield to save their religion against the army they once worked with, two brothers Bhai Sukhdev Singh Fauji and Bhai Balbir Singh Fauji attained shaheedi and added their names to the shaheeds of the freedom movement.

The attack of Sri Harimandir Sahib in June 1984, left the Sikhs around the world in vein. After the attack, the Indian army had surrounded the whole complex, Bhai Sukhdev Singh and brother, Bhai Balbir Singh were allowed to pass as they soldiers of the Indian army. Both singhs wet to the destroyed Sri Harimandir Sahib with their families. Upon seeing the state of Sri Akaal Takht Sahib both singhs flawed tears of blood.

When Bhai Balbir Singh got some Jal from the holy Sarovar, the Jal was red with the blood. When the eyes of both brothers met, the blood shot eyes had made their mind up on the future. As both brothers were going back to duty, they each footstep was heavy as it has ever been. But these two brothers weren’t going back on duty, they were going to their bases to get weapons and jump into the battlefield of Sikh Freedom Movement.

After brutally torturing the Dharmi Singh, the police managed to find out that Bhai Balbir Singh will be visiting home before carrying on with the armed struggle. Upon getting this information, the police had planted many undercover police officers near the family house and around the area. The police had used all their tactics to remain undercover and wait for Bhai Balbir Singh to turn up, so they could surround him and arrest him.

Soon as Bhai Joga Singh saw the Indian security forces, he knew something was wrong and managed to escape from the house through the fields. The jeeps of BSF entered the house and like an actions the BSF officers took up positions within the house. Some commandoes came to Bhai Balbir Singh’s father, Sardar Dalip Singh and started questioning him, “Where is Balbir Singh?” Sardar Dali Singh was shocked and answered, “How would we know where Balbir Singh is?” The Indian security forces searched the house and the farms of the family and then asked the family, “Where is his (Bhai Balbir Singh) family?” Here the problems arose for the family, as Bibi Harwinder Kaur had left the house to meet her husband with their daughter. Mother of Bhai Balbir Singh, Mata Savinder Kaur looked at the inpatient commandoes and said, “Son, relax take a seat and have some water. My daughter-in-law (Bibi Harwinder Kaur) has gone to get medicine for her daughter, as her daughter is not very well.

Bibi Harwinder Kaur met her husband, Bhai Balbir Singh at the given location. This meeting amongst a husband and wife held an important relations as no e knew that this would be the last meeting of the couple. The Khadku Singhs faced death at every moment of their lives. The relative of the family, Bhai Joga Singh managed to get to Bhai Balbir Singh and inform him that the army has surrounded his house and village. Bhai Balbir Singh understood that it wasn’t right staying here longer. Bhai Sahib said his goodbye to his wife and his daughter.

Jumping into the battlefield

In the battlefield, Bhai Balbir Singh joined the Khalistan Commando Force through Bhai Rashpal Singh Fauji. The Jhujaru Singhs became fully active within the battlefield. The real encounters and bomb blasts in the boundary of Punjab, clearly gave the message to the world that the Sikhs are fighting the oppressing Indian government for the Sikh homeland. Bhai Balbir Singh did many big actions with his fellow singhs of Khalistan Commando Force.

In 1985, Bhai Sukhdev Singh was given bail also and was out of jail. For some days Bhai Sukhdev Singh stayed at home with family, but soon managed to get in touch with Bhai Balbir Singh and then Bhai Sukhdev Singh said his farewell to his family and picked up weapons. Now both brothers were striking the Indian security forces like lightening and taught the attackers of Sri Harimandir Sahib a lesson they would never forget.

Shaheedi of one brother

In March 1986, the racist CRP stopped a bus of the Dam Dami Taksal Chownk Mehta and discriminated the Panj Pyare. The singhs of Khalistan Commando Force took this as direct challenge to the Sikhs and the singhs agreed on attacking the CRP base near Kathunangal. The singhs selected to attack the CRP base involved the two brothers also. Bhai Rashpal Singh Fauji, Bhai Harbhajan Singh Mand, Bhai Gurdev Singh Usmanwala and some more singhs alike.

When the singhs of Khalistan Commando Force attacked the CRP base, in the first exchange of fire many CRP officers fell to the ground. Soon the CRP managed to call for more back up via the wireless sets. Instead of causing some damage and escaping, the singhs of Guru Gobind Singh Ji stayed and continued to fight with the Indian security forces. Later the group of singhs was surrounded from all over. Even then the singhs bravely faught and killed many CRP officers, but as the singhs were surrounded they also faced casualties. Bhai Sukhdev Singh attained shaheedi in this battle and Bhai Balbir Singh was seriously wounded. Bhai Harbhajan Singh also attained shaheedi in this fierce battle. Then the remaining singhs managed to escape from the enemy’s territory. Bhai Rashpal Singh Fauji picked the wounded Bhai Balbir Singh on his shoulders and escaped.

The news was very sad, but the families of Jhujaru Singh are always ready to hear the news of the shaheedi. The parents of these brothers were given the news that one of their son (Bhai Sukhdev Singh Fauji) had attained shaheedi and the other son (Bhai Balbir Singh Fauji) was extremely wounded. Bhai Balbir Singh was treated for his wounds secretly in the hospital of Amritsar by the Gursikh doctor.

When Bhai Harjinder Singh Jinda and General Labh Singh robbed a bank of Ludhiana they had carefully selected singhs for this mission, this is why this bank robbery was one of the biggest in the world. In this team, Bhai Balbir Singh Fauji was also selected. The singhs had looted 5 crore 70 lakh rupees from Ludhiana’s Punjab National Bank and shook the Indian government.

After the successfully robbing the bank, the Ludhiana police managed to arrest Bhai Balbir Singh some days after the robbery. Bhai Balbir Singh was taken to different police stations and brutally tortured, but Bhai Balbir Singh never gave in information on his group. In the end Bhai Sahib was sent to jail after being charged for the bank robbery along with many more cases.

Even though Bhai Balbir Singh wasn’t living an underground life, in February 1992 the Delhi government gave the power of Punjab to Butcher Beanta but under his power anybody who were connected to the Sikh Freedom Movement were either thrown into jail or killed in fake encounters. The eyes of the evil police were also on Bhai Balbir Singh Fauji but as he lived at Mehta Chownk the police could not get their hands of him. 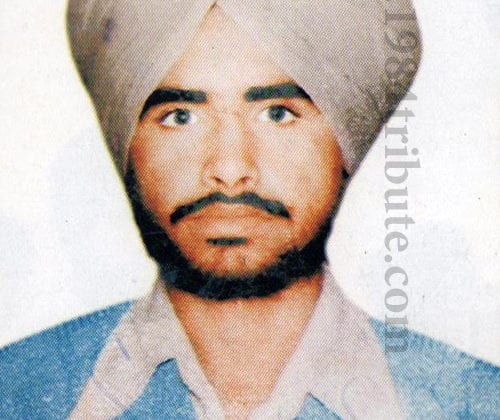