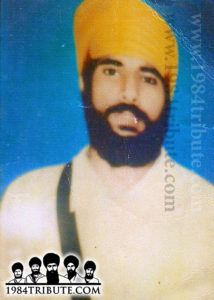 Bhai Subeg Singh was born in the year of 1955, in the house of Sardar Puran Singh and from the womb of Mata Ninder Kaur in the village of Madoki near Chogwan, district Amritsar. Bhai Sahib was the eldest of 3 brothers and 2 sisters. Bhai Sahib had only studied up to 7th class at the government school of Madoki village when Sardar Puran Singh moved his family to Bhai Sahib’s Nankana village in Ucha Tera, Ajnala. As Bhai Sahib was the eldest sibling of all, he started helping his father in the farms at a very young age. Bhai Sahib was born in Gursikh family, hence Sikhi was gifted to him in heritance.

Bhai Paramjit Singh was the brother of Mata Ninder Kaur and was a Parcharak for Damdami Taksal as well as a senior worker for All India Sikh Student Federation Ajnala branch. On the orders of Sant Ji, Bhai Paramjit Singh would travel to nearby villages and preach about the Sikh faith and create awareness on Dharam Yudh Morcha. It was Bhai Paramjit Singh who took his nephew (Bhai Subeg Singh) along with Bhai Mukhtiar Singh to Sri Harimandir Sahib to do Sewa with Sant Jarnail Singh Ji Khalsa Bhindranwale. It was during this time Bhai Sahib was blessed with the gift of Amrit from the Panj Pyare of Damdami Taksal and he took part in all types of selfless services in name of Sikhi. Bhai Sahib started staying at Sri Harimandir Sahib with other Jhujaru Singhs and he would go home to see his family after 2/3 months. At Sri Darbar Sahib complex Bhai Sahib came in contact with Bhai Amrik Singh, President of All India Sikh Student Federation and other Jhujaru Singhs of this group. Bhai Sahib had great amount of love and respect for Bhai Sukhdev Singh Sukha Sipahi alias General Labh Singh.

After the June 1984 attack, Bhai Sahib re established contact with General Labh Singh and started small Jhujaru Singh group locally. This group of Jhujaru Singhs had few pistols and 4/5 Thompson guns and some weapons they had looted from the CRPF soldiers. Bhai Sahib was famous amongst the locals for leading the Funiar Regiment under the command of General Labh Singh. Bhai Karaj Singh Thande, Bhai Malkit Singh Ajnala, Bhai Balbir Singh (village Josh Mann Singh), Bhai Sukhwant Singh Kala, Bhai Harpal Singh (village Phoola), Bhai Jaswinder Singh Rahon and many other Jhujaru Singhs did actions under the command of Bhai Sahib. Many of Bhai Sahib’s actions were done in secret and no responsibility was taken. Bhai Sahib did not spare a single enemy of Sikh nation in his area.

A Congress Party Sarpanch from Bhai Sahib’s area, Ajit Singh was very anti-Sikh, he had many Jhujaru Singhs arrested and would use the local police force to harass and torture Sikh families, especially if they were a family of Jhujaru Singh. Bhai Sahib along with other Jhujaru Singhs punished this evil Sarpanch who was surrounded by armed guards in January 1987. The killing of Ajit Singh was great set back for the Indian security forces in the area as he was their ears and eyes on the ground. After this action the Punjab police put a reward of 1 Lakh Rupees on Bhai Sahib’s head. Bhai Sahib punished many men like Ajit Singh with his own hands. The Punjab police now started harassing Bhai Sahib’s family. The water pumps that belonged to the family were burnt by the police and family members were arrested and tortured at police station regularly. This had no affect of Bhai Sahib and he continued doing Jhujaru actions.

On 10th July 1987, Bhai Sahib stormed into the guarded house of Congress MLA Satnam Bajwa in village Bheni Kalan (Amritsar), who was known for having many Jhujaru Singhs made martyrs and shot him dead. In this action Bhai Sahib killed another 4 of Satnam Bajwa’s armed guards. Bhai Sahib also took the full responsibility under Funiar Regiment. This brave action of Bhai Sahib had filled the Indian security forces with fear. The son of Satnam Bajwa was a BSF officer, and he had arranged the whole police force of the local areas to hunt for Bhai Sahib. In search of Bhai Sahib, the BSF arrested Bhai Malkit Singh Ajnala from Guru Ka Bagh and tortured him blindly, in the end once a Bhai Sahib’s Jhujaru brother, Bhai Malkit Singh Ajnala had given the location of Bhai Sahib’s location.

Within hours of getting information, the BSF soldiers surrounded the village of Kavatgarh, near Sensra, Ajnala on 20th July 1987. Bhai Sahib were sleeping here along with Bhai Balbir Singh (village Josh Mann Singh), Bhai Sukhwant Singh Kala, Bhai Harpal Singh (village Phoola) and Bhai Jaswinder Singh Rahon. The BSF soldiers arrested all the Jhujaru Singhs as they slept. The son of Satnam Bajwa tortured all Jhujaru Singhs by the riverside of Sensra village, but all the Singhs recited Gurbani and did not give any information to the police. In the end, on 21st July 1987 all 5 Jhujaru Singhs were taken to the village of Meerpur, which is situated between Qaddian and Batala. Here the BSF soldiers staged a fake encounter and made all Jhujaru Singhs martyrs of Khalistan. The police did not give the bodies to the families of the Singhs.

Information given by the family of Shaheed Bhai Subeg Singh Funiar 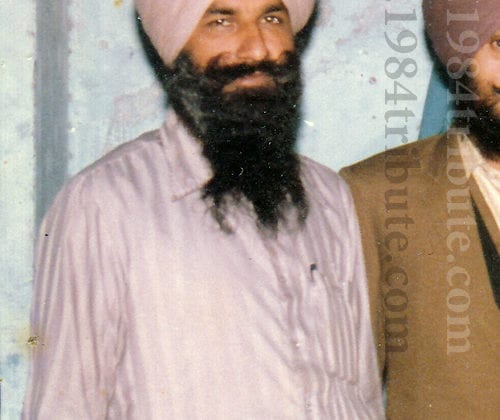 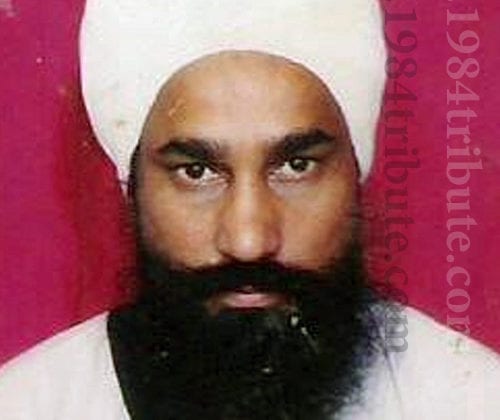