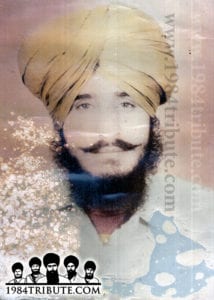 In the struggle to obtain Sikh Rights by Sant Jarnail Singh Ji Khalsa Bhindranwale, many young brave Singhs took part in this struggle, one of them was Shaheed Bhai Ranjeet Singh Rana Tetrake who was known as one of the top Jhujaroo Singh’s. Bhai Sahib was born in the family of Sardar Kirpal Singh from the womb of Mata Simarjit Kaur alias Harvant Kaur on the 23rd of April 1962 in the village of Tetrake/Dhusiwale, near Dera Baba Nanak District Gurdaspur. Bhai Sahib used to be called Rana with affection. Bhai Sahib completed up until 8th class from the local high school in his village, his 10th class from Dharmkot Randhawa Government School and for his 11th class he enrolled into the Government school Ram Das. Bhai Sahib’s household was very religious. Bhai Sahib’s mother enjoyed reading the life stories of the 18th century Singh’s and used to read them to her children, which inspired Bhai Sahib. Bhai Sahib took amrit when he was studying in the 8th class and when Bhai Sahib used to be working in the fields he used to read religious historical book. In 1983 Sant Jarnail Singh Ji Khalsa Bhindranwale started a movement to get the Sikhs their rights, this movement was at an all time high. The young Sikh warriors entered the battlefield and were willing to sacrifice their lives to stay true to Sant Jarnail Singh Ji Bindranwale’s words. In 1983 Bhai Sahib and his friends had went to Sri Darbar Sahib Amritsar where they used to listen to Sant Ji’s revolutionary thoughts. On the 2nd of June 1984 the Hindu Prime Minister Indira Gandhi ordered the Indian Army to attack the holy Sikh Shrine Sri Akal Takhat Sahib with tanks and missiles, on the Shaheedi Purab of Sahib Sri Guru Arjan Dev Ji, to crush the hopes of the Sikh Kaum, she wanted to teach the Sikhs a lesson so they wouldn’t dare to think about rebelling against her. Sri Akal Takhat Sahib was destroyed, Sri Harmandir Sahib and another 37 other Gurudwaras were attacked by the Indian Army, thousands of innocent Sikh Pilgrims were killed by the Army. Under the supervision of Sant Jarnail Singh Ji Khalsa Bhindranwale, General Shabeg Singh, Bhai Amrik Singh (leader of Sikh Student Federation) the Jhujaroo Singh’s fought to protect the holiness of Sri Akal Takhat Sahib and Sri Harmandir Sahib, they fought fiercely with the soldiers. The events of 1984 shattered the heart of the Sikh Kaum. The Sikh youth came forward to go to Sri Amritsar but the Indian Army stopped them by imposing curfews. Between the 7th and 8th of June innocent young Sikh men were being arrested, and after hearing about the attack on Sri Akal Takhat Sahib the Dharmi Fauji’s left the Army and headed towards Sri Amritsar.

One day the Firozpur city police and B.S.F worked together to try and capture Bhai Sahib and one of his companions Charanjit Singh in which they succeeded, the Batala police took them to the investigation centre and interrogated them for 20 days, after that Majeeta Police interrogated them for another 3 days and in the end they made up 32 cases against the Singh’s and sent them to Amritsar Jail. In 1987 when the police took the Singh’s to court, Bhai Sahib’s fellow companions, Jhujaroo Singh’s opened fire at the police, in this firing one police man lost his life and all the others just hit the floor and saved their lives, Bhai Sahib got into the red van with the Singh’s and had managed to escape. On the street opposite Manawale Station the Singh’s stopped the van on the side of the road, Bhai Sahib jumped out the van and walked on by foot through the fields. This whole Khadku operation was by Bhai Harjinder Singh Jinda and General Labh Singh and other fellow Singhs.

Bhai Sahib joined Khalistan Commando Force and under the commands of General Labh Singh, Bhai Sahib fought in the Sikh Struggle, but he also stayed connected with Damdami Taksal. Bhai Sahib had started his war against police informers. According to the police in Ajnala Sub Division and Gurdaspur, terror would rise by Bhai Sahib’s name. The police had put an award on Bhai Sahib’s head for 1 Lakh rupees and the head of the Punjab Police Rebeiro had announced that Bhai Sahib was an A-Class Khadku. Bhai Sahib had become headache for Punjab Police, they couldn’t get any inside information about him. The police then used a new tactic they approached the Singh that had been arrested with Bhai Sahib and struck a deal with him, they freed the Singh from jail and used him to help them arrest Bhai Sahib. The Singh got in touch with Bhai Sahib and took Bhai Sahib under his trust and started to stay with him, he reached the height of betrayal. On the 25th of July 1987 which was a Saturday, under the orders of S.P J.S Rawat the C.R.P were patrolling and had blocked off the bus stop near the school in Banoor and Baba Banda Singh Bahadur Gurudwara. According to the report of journalist Bhushan Sirhindi the fierce battle had took place at the Bus stop of Banoor near Rajpura – Chandigarh Road. Bhai Sahib along with the Singh were travelling on a Suzuki motorcycle and were stopped by the C.R.P, the Singh was driving the motorcycle and Bhai Sahib was sitting behind him, Bhai Sahib identified himself as a student from Punjabi University Patiala and showed him his ID card. Bhai Sahib had to weapons on him, the C.R.P gave the go ahead to let them through but the police cat then hinted this is who we were hunting for. The C.R.P officers tried to control Bhai Sahib and in this he managed to grab the officers Sten Gun, the black cat grabbed the Sten Guns MEGAZINE, Bhai Sahib then understood the whole story and wrestled with the C.R.P and managed to break free and jumped into a dirty sewer, Bhai Sahib refused to give up and hand himself to the enemy but when Bhai Sahib got out the other side the C.R.P were heavily firing and Bhai Sahib couldn’t escape from their bullets and attained Shaheedi.

Bhai Sahib’s family are upset that no Panthic Jathebandi has made an attempt to either meet them or do anything in the memory of Bhai Sahib, but something should definitely be done in honour of this brave warrior. Could it be that these words of the poet that are a tribute to the Shaheeds be turning false?

‘Shaheedo Ki Chitao Par Lagange Har Baras Mele, Vatan Pe Mitane Valo Ka Yehi Baki Nisha Hoga’ – In the memory of the Shaheeds every year a Shaheedi Mela will be held, the ones who sacrificed their lives for the country this will be their mark. Sunday 26th July 1987 main newspaper headline – Ranjit Singh Rana along with another two dangerous terrorists killed in a fierce battle. 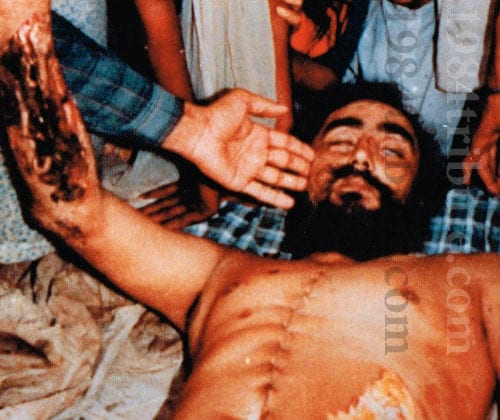