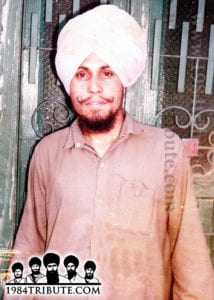 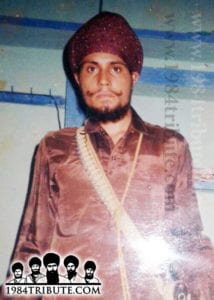 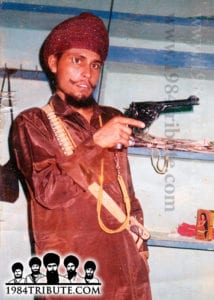 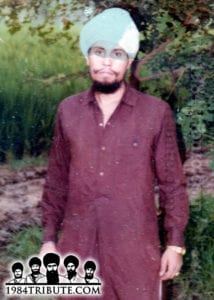 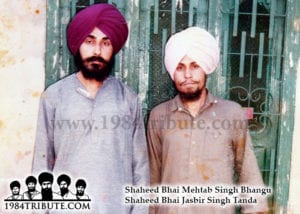 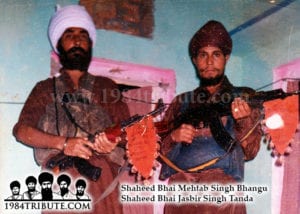 Bhai Hardial Singh (later named Bhai Mehtab Singh Bhangu within the Sikh freedom movement) was born in the house of Sardar Veer Singh and from the womb of Mata Sukhwinder Kaur in the village of Bhangwan, district Amritsar. Bhai Sahib had one older brother, Bhai Kuldeep Singh. Bhai Sahib’s family were all Gursikhs and Sardar Veer Singh was blind. Bhai Sahib studied up till 7th class at the government school of Gehri Mandi, and after Bhai Sahib started helping his elder brother in farming, as the family owned a lot of land. Ever since the Indian army had attacked Sri Akaal Takht Sahib, many Sikhs around the world, including Bhai Sahib’s family were living in disgust at the Indian government and wanted to establish a Sikh Raj in which Sikhi and Sikhs would remain safe.

When the Sikh freedom movement for Khalistan started, Bhai Sahib’s area was heavily active within it. From the village of Gadli, situated not far from Bhai Sahib’s village, Bhai Harjinder Singh Jinda had started doing Jhujaru actions from the year of 1984 under Khalistan Commando Force and had become a thorn in the India’s security system. Bhai Sahib was an Amritdhari Sikh youth and was very interested in the Sikh struggle. Soon Bhai Sahib came in contact with Bhai Palwinder Singh Sona of village Khalera, and started doing Jhujaru actions in secret with Bhai Sona under the command of Bhai Tasbeer Singh Jhander of Khalistan Liberation Force. The local villagers never knew of Bhai Sahib’s involvement into the Sikh struggle until his martyrdom. Bhai Sahib’s real name was Bhai Hardial Singh, but the Jhujaru Singhs of Khalistan Liberation Force named Bhai Sahib, Bhai Mehtab Singh Bhangu.

Bhai Sahib loved Bhai Palwinder Singh Sona and Bhai Jasbir Singh Tanda like brothers, Bhai Sahib remained with these Jhujaru brothers like shadow. Bhai Sahib’s body was like an athlete and it was filled with strength and courage. Within the Khalistan Liberation Force, Bhai Sahib was well trained in using assault rifles and fighting in battles, combined with his bravery Bhai Sahib had many encounters with the Indian security forces and had escaped unharmed. Bhai Sahib always kept a cyanide capsule with him in case he got caught alive by the enemy. Bhai Sahib even pretended to swallow the capsule in front of his mother as a joke.

As well as doing Jhujaru actions in Punjab, Bhai Sahib also did actions in Uttar Pardesh under the orders of Khalistan Liberation Force. Bhai Sahib’s Massi lived in Uttar Pardesh’s Beaspur area and Bhai Sahib would go there when the Punjab Police would increase their search of Jhujaru Singhs. As well as punish the killers of Sikhs, Bhai Sahib also supported the local community with their daily struggles too. Bhai Sahib increased Sikh awareness, stopped expensive weddings which made the bride’s family finically suffer, funded the marriages of girls from poor families, banning of drugs and solving minor disputes with dialogue. Bhai Sahib encouraged Khalsa Panchayats in every village. Bhai Sahib also got his elder brother married and only 11 members attended the Anand Karaj from his family.

Bhai Sahib never used his assault rifle for a wrong deed, it was always used to defend the weak and the innocent or to punish the killers of innocent people. Bhai Sahib’s family were in a land dispute with the Sardar Veer Singh’s side of the family and Bhai Sahib made it clear to them that they do not need to be scared of Bhai Sahib because he has an assault rifle, that this assault rifle will only fire bullets for the Sikh nation and not for personal gain.

On 26th June 1991, Bhai Sahib along with Bhai Jasbir Singh Tanda (village Bhurj, Patti) and Bhai Gurmail Singh Mini (village Dhotian, Tarn Taran), were resting in a house, in the village of Chhabri Sahib, near Fatehabad. On this morning, Bhai Sahib was supposed to travel to Uttar Pardesh. For sometime the Indian security forces had laid a trap of informers and touts to capture this Jhujaru Singhs, and for this reason the Punjab police were informed of Bhai Sahib’s location. Early hours of 26th June 1991, the CRPF along with Punjab police surrounded Chhabri Sahib village, and as soon as the enemy came close to the house in which Bhai Sahib was, they were faced with heavy fire from the sons of Dhan Sri Guru Gobind Singh Ji Maharaj. A battle between 3 Jhujaru Singhs and thousands of Indian security personal ensued. All 3 Jhujaru Singhs managed to get away from the house and to a nearby river, from where they would try to escape. In the first covering fire, Bhai Gurmail Singh Mini managed to make his getaway. Bhai Sahib was also about to escape but Bhai Jasbir Singh Tanda was hit by the enemy bullets near his thigh and he attained martyrdom.

Information given by the family of Shaheed Bhai Mehtab Singh Bhangu