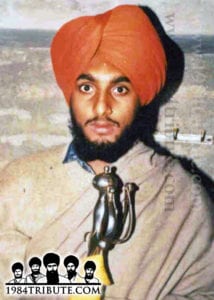 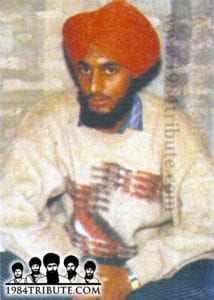 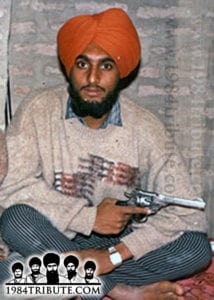 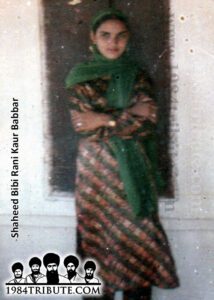 Shaheed Bhai Lachman Singh Babbar, then Bashir Mohammed, was born on August 1, 1970 in Bhanmay Kalan, District Mansa. His parents were Janab Ali Mohammed and his mother was Mata Noori (Dayalo). Bashir had two other brothers and two sisters.

Bashir Mohammed was very studious from a young age and also very active in sports. He was the leading member of the Government High School (Bhanmay) volley-ball team and before entering the tenth grade, also began to take an interest in wrestling. Bashir began to practice wrestling in the village beside his and then travelled to all the local villages to participate in the various athletic competitions. He began to be known in the area as a very good wrestler. Bashir eventually issued an open challenge to all the wrestlers in the area but no one accepted. He was now a wrestling champion.

Bashir’s mother, Mata Noori, had been one of the few Muslims left behind after the Partition of 1947. She had been raised by a Sikh family who then married her to a Muslim to respect her family traditions. But Noori had developed a respect for the Sikh faith and where Bashir was taught verses from the Koran, his mother also recited bani. Bashir’s diary was filled with quotations from both the Koran and Sri Guru Granth Sahib.

After graduating from High School, Bashir decided to help improve his family’s financial situation and joined the Punjab Police. Seeing his strong body and hearing about his skills as a wrestler, DSP Sukhdev Chahal took Bashir as his personal bodyguard.

It was in these days that the Sikh Liberation Movement was in full stride. Sikh youth were leaving their homes with assault rifles in their hands and jaikaray on their lips to fight against Hindustani oppression and the disrespect of Sri Darbar Sahib. The Panth had begun its struggle for Khalsa Raj.

In the Mansa area, a cell of the Babbar Khalsa was proving to be a very big problem for the Indian Security Forces. Singhs who were associated with the Akhand Kirtani Jatha formed Babbar Khalsa. They were inspired by the words of Bhai Sahib Randhir Singh, “We will not cause any hurdle to a just rule, but if an evil regime tries to destroy our religion and its practices, with the support of Satguru, Akaal Purakh, we will shake its very roots.”

In those days, Bhai Gurmail Singh Babbar and Bhai Rashpal Singh Babbar along with their Jatha were active in the Mansa area. The Punjab Police were frustrated by their growing influence and bold actions. The security forces, taking a cue from Brahmin ideology, decided to remove all restrictions on its men to fight the Sikh Movement. False encounters, atrocities on women, children and the elderly and recruitment of Black Cat thugs became the norm.

DSP Sukhdev Chahal realized that the best way to defeat Babbar Khalsa would be from the inside out. He decided that an informer was what the Punjab Police needed. For this mission, DSP Chahal needed someone he could trust fully and someone who would have no sympathy for the Sikh movement. He decided that for this mission, his trusted Muslim bodyguard, Bashir Mohammed would be their man.

Bashir was ordered to grow his hair and take the appearance of a Sikh. Once his beard had grown long enough, the Mansa Police enacted an elaborate drama. Bashir, who now looked like a Singh, was shown to have escaped from the Sardulgarh police station with weapons and ammunition. He used information provided by the police to approach Bhai Gurmail Singh Babbar’s group and managed to establish links with Babbar Khalsa.

DSP Chahal had thought that by sending Bashir Mohammed into the Babbars, he would be able to learn about the inner workings of the group, stop their missions and eventually wipe them out. Akaal Purakh had something else planned. Bashir began spending time with the Singhs and although at first he would send regular reports, he started to develop a deep respect them. The Singhs would rise at Amrit vela and meditate on Naam and would do their nitnem together. The way in which they read bani and their faith in Waheguru impressed Bashir. They had complete love and respect for each other and were willing to sacrifice their all for their brothers. Bashir Mohammed spent time with Bhai Rashpal Singh and Bhai Gurmail Singh and also came in contact with Bhai Dharam Singh Keshtival and Bhai Wadhawa Singh Babbar.

Bashir had taken the Sikh form to infiltrate the group, but now he was beginning to feel Sikhi in his heart. He felt as if he was a traitor to his own conscience by being an informant. After being troubled for some time, Bashir decided that despite the risk of death, he would admit to the Singhs that he was an informant of the Punjab Police and also a Muslim. He approached Bhai Gurmail Singh one day and told him the story of how DSP Chahal had arranged his infiltration into the Jatha by faking his escape from the police. Bashir also explained that he could no longer continue the act and now felt as though he wanted to dedicate his life to Sikhi and fight in for Sikh liberation. He was not sure what reaction the other Singhs would have but the Sikh faith teaches, “The Lord lovingly embraces whoever comes to the Lord’s Sanctuary – this is the way of the Lord and Master.”

The Singhs decided that Bashir should be given time to think about his decision and sent him for further training. There, he met many other Chardi Kala Singhs and his love for Sikhi grew. Bashir asked that he be given Amrit. An Amrit Sanchar was organized with Bhai Wadhawa Singh doing sewa in the Panj Pyare. Bashir bathed and arrived dressed in the Khalsa’s Bana to beg for the gift of Amrit and Naam. The Panj Pyare asked over and over, “Are you becoming a Sikh under any pressure? Is someone compelling you to ask for Amrit?” Bashir would reply again and again, “No, it is my own wish. Please bless me.” The Panj Pyare decided that Bashir would be accepted and he was given Amrit and the gift of Naam. Bashir Mohammed was no more. Born that day was Bhai Lachman Singh Babbar.

Bhai Lachman Singh and the other Singhs, who wanted to fight for Sikh liberation with Babbar Khalsa, were sent back to their areas in Punjab after agreeing in the presence of Sri Guru Granth Sahib and the Panj Pyare to the following conditions:

After returning to the Mansa area, Bhai Lachman Singh Babbar became a well known Sikh fighter. The traitors to the Sikhs in the area began to tremble at his name. After the shaheedi of area-commander Bhai Gurmail Singh Babbar, Bhai Lachman Singh was made the Lt. General of the group, DSP Chahal was going mad trying to control the Babbars. His informant in the Jathebandi had not been heard from for a long time and the Singhs would carry out the most daring missions and not be caught. And no information on who they were or where they were hiding could be traced. After some time though, Chahal received information that Lt. General Bhai Lachman Singh Babbar was none other than his former bodyguard, Bashir Mohammed. Chahal was furious and vowed to kill his former informant at any cost.

Bhai Lachman Singh became known across the Punjab and DSP Chahal stayed closely on his trail. Bhai Lachman Singh had now gotten married to Sakeena Begam who also became a Sikh and changed her name to Rani Kaur.

The dark days of 1992 arrived and the major leaders of the Sikh resistance were eliminated one by one. The struggle began to slow down as the shining stars of Babbar Khalsa and Khalistan Liberation Force began to fall. Bhai Sukhdev Singh Babbar, Bhai Gurjant Singh Budhsinghwala, Bhai Pargat Singh Fauji, and Bhai Bhaag Singh Babbar were the major leaders in Malwa and all embraced martyrdom.

By February 1993, Punjab was no longer safe for any Sikh fighter. Informers seeking rewards for turning in Singhs were everywhere, on the prowl. Bhai Lachman Singh, still only 22, was one of the last major fighters in action. Rani Kaur was pregnant with their first child and so Bhai Lachman Singh decided that living a life on the run in Punjab was too much for his wife and it might be best if they left Punjab for some time so they could rest and the situation might improve. The couple decided to move to Calcutta.

DSP Chahal assembled a party of his bounty hunters and left for Calcutta.

On May 17, 1993, Bhai Lachman Singh and Bibi Rani Kaur had finished their day and gone to sleep. The Punjab Police hit squad moved in. They surrounded the area and closed in on the apartment. Leading the party were DSP Chahal and SP Operations SK Singh. Chahal’s moment of revenge was at hand, but he was deathly afraid of Bhai Lachman Singh. He remembered how big the wrestler Bashir Mohammed was and had heard of Bhai Lachman Singh Babbar’s daring missions. He wasn’t going to take a chance. He ordered the police party to without warning, open fire on the apartment. The door was ripped apart by the burst of bullets and the firing continued on for 15 minutes. The surrounding area was awakened and neighbours began to go on their roofs to see what was happening.

Chahal ordered his men to enter the apartment to see if the couple were still alive. The terrified officers crept forward through the shattered door and saw Bhai Lachman Singh and Bibi Rani Kaur lying in a pool of blood. Bibi Rani Kaur was visibly pregnant and had become a martyr along with the couple’s unborn child.

DSP Chahal, having regained his courage, entered the apartment and grabbed Bhai Lachman Singh’s kes and dragged his body out. The stone hearted police men were shocked at having killed a pregnant woman and respectfully carried out her body. The sun had risen and neighbours began to gather on the street to see the bodies of their new Sikh neighbours. One brave Bengali Babu approached and asked Chahal, “Sardar Ji, why did you kill these people?” Chahal replied, “Why? What’s it to you?” and shoved him aside. The bodies were loaded onto the police jeeps and the killers drove away to claim their rewards. Another star had fallen. Bhai Lachman Singh Babbar is a hero of the Sikh Panth and his sacrifice should never be forgotten.

Information given by the family of Shaheed Bhai Lachman Singh Babbar 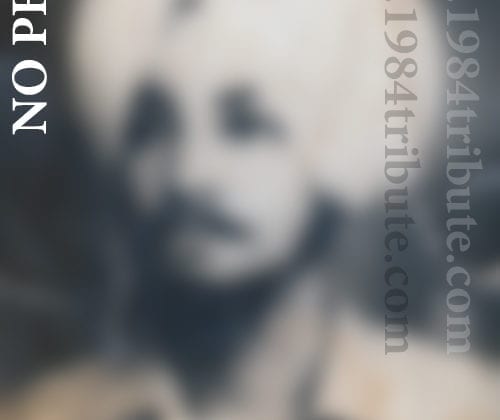 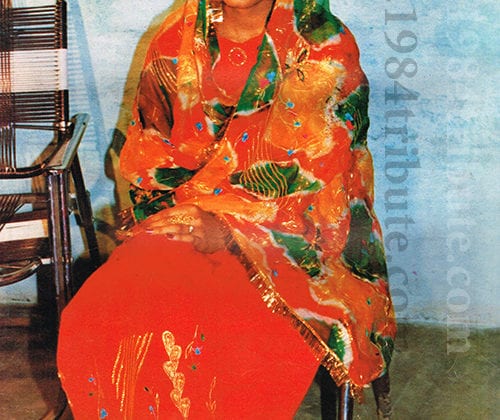 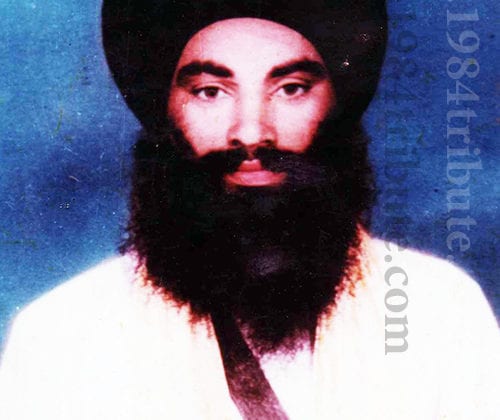