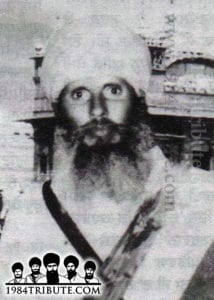 ‘The first human bomb of the Sikh Freedom Movement’

As time passed Bhai Sahib used his whole strength to be positive and joined the Kar Sewa Jatha of Baba Basta Singh of Sri Achal Sahib in Batala. It was at this dera, Bhai Sahib thought that his life was now finally on the right track. Soon Bhai Sahib took amrit from the Panj Pyare and became a Khalsa. Bhai Sahib then took Santhaya and started doing rauls at Sri Akhand Paath Sahibs.

In 1970, the family had Bhai Sahib married to Bibi Kulwant Kaur. In June 1984, when the Indian government sent in their army to attack Sri Harimandir Sahib, Bhai Sahib was still doing Kar Sewa with Baba Basta Singh. As well as demolishing the Sri Akaal Takht Sahib with tanks and cannons, the Indian army also killed thousands of Sikh youths, children, women and elders. This evil act of the Indian government broke the heart of Sikhs all over the world. Bhai Sahib was also deeply affected by this also, the attack on Sri Harimandir Sahib left a spark in Bhai Sahib that wanted revenge.

In 1986, Bhai Jaswant Singh Ahluwalia and fellow singhs would come see Bhai Sahib at night, during this time the Sikh Freedom Movement was taking full control of Punjab. These armed groups of Jhujaru Singhs were fighting the battle of freedom against the oppressing Indian security forces. A local tout was killed by the Jhujaru Singhs and on suspicion the Punjab police arrested Bhai Sahib. At the police station Bhai Sahib was mercilessly tortured, the local villagers may have saved Bhai Sahib from being charged with fake cases but the brutal torture of the Punjab police left Bhai Sahib’s body in intense pain. By now Bibi Kulwant Kaur had given birth to Bhai Sahib’s 2 sons, Bhai Manjit Singh, Bhai Paramjit Singh and a daughter, Bibi Sarabjit Kaur. On one side Bhai Sahib had family responsibilities that needed fulfilling and on the other hand the Punjab police were harassing Bhai Sahib daily. To avoid the harassment of the Punjab police, Bhai Sahib moved to Gurudwara Lehna Singh Ji as a Granthi Singh, this gurudwara was situated between Khujala and Dhepai. The whole family started staying here with Bhai Sahib.

In this area at that time, brave generals of Khalistan Liberation Force such as Bhai Jugraj Singh Toofan, Bhai Manjit Singh Khujala and Bhai Jaswant Singh Ahluwalia had established many bases here. Even here Bhai Sahib continued to do sewa of arranging langar for the Jhujaru Singhs and helping in anyway. A black cat turned police officer by the name of ASI Baldev had been appointed to a police station in Dhepai village. This Thanedar mad made a big team of black cats who at night and day walked around in civil cloths armed portraying themselves as Jhujaru Singhs. If these black cats thought that any member of the public was linked to the Jhujaru Singhs they would take them to the police station and kill them through blind torture. In this area the Thanedar and his black cats had killed many innocent people and this was a direct challenge to the Khadku Singhs. To finish of these uniformed gangsters Bhai Jugraj Singh Toofan held a meeting with his group, in which it was decided that the leader of the black cats will be eliminated. It was planned a human bomb will kill ASI Baldev and Bhai Jaswant Singh Ahluwalia was given the task of preparing the human bomb.

According to the planned action, Bhai Jaswant Singh Ahluwalia spoke to Bhai Sahib and asked if would want to be the human bomb. Bhai Sahib had made himself clear in the past that he wanted to eliminate a big enemy of the Sikhs even if it meant he himself were to be killed in the action. Bhai Sahib happily accepted to tie the belt of explosives to his waist to eliminate the evil ASI Baldev. By now ASI Baldev had moved to Udhanwal police station, which was close to Dhepai police station, ASI Baldev could be easily contained at this police station by the Jhujaru Singhs. The singhs had fully done their CID on the ASI.

Following the plan, on 18th July 1991 Bhai Sahib entered the office of ASI Baldev with a belt of explosives around his waist. Upon seeing Bhai Sahib, the ASI Baldev said, “What’s up Baba Ji, sit.” Bhai Sahib sat on the chair closest to the ASI. Answering the ASI, Bhai Sahib said, “I’ll tell you.” Bhai Sahib grabbed the switch for the bomb from his pocket and pressed it, but the wire to the bomb had been worn out and did not explode. After hearing the clicking of the switch, the ASI Baldev became cautious of Bhai Sahib. The ASI quickly got up from his seat and tried to search Bhai Sahib but Bhai Sahib pushed his hand away and scuffle broke out. Soon as the constables saw the scuffle between Bhai Sahib and the ASI, they quickly grabbed Bhai Sahib and after tying his arms they took off the belt of explosives.

After this, hell broke loose on Bhai Sahib by the police. According to a witness, the police broke the arms and legs of Bhai Sahib. Bhai Sahib had asked who had sent him, but even after the blind torture Bhai Sahib did not have any singh arrested nor any Jhujaru Singh bases raided. At that time the SSP of Batala was Sita Ram. Sita Ram personally came to get Bhai Sahib and take him to the famous torture house, ‘Biko’.

Till today the question of how, when and who made Bhai Sahib shaheed remains unanswered. Police officers who sympathised with the Sikh Freedom Movement told the family that Sita Ram had used the very same bomb Bhai Sahib took to blow up ASI Baldev to make Bhai Sahib a Sikh martyr. This is how the very first human bomb, Shaheed Bhai Kundan Singh Nihang Singh attained shaheedi. 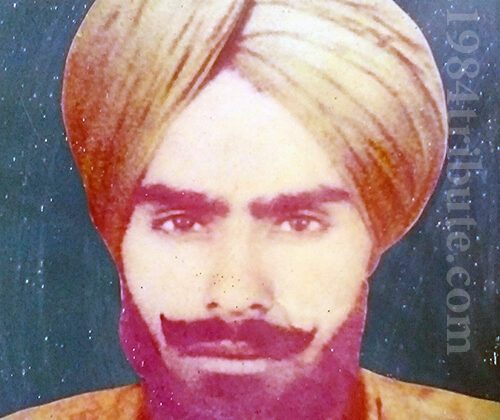 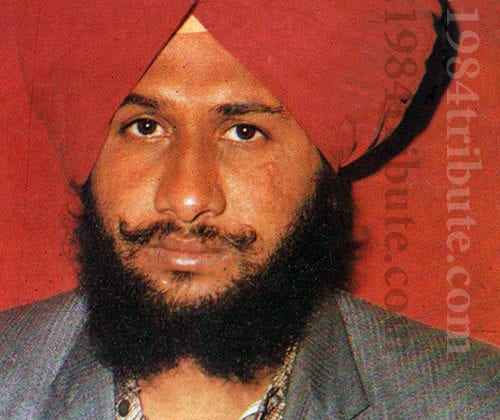