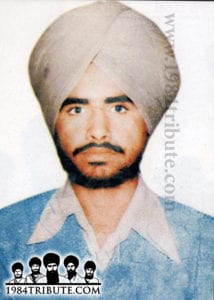 In the attack done by Indian government on Sri Harimandir Sahib in June 1984, many Sikhs gave their lives defending Sri Darbar Sahib under the command of Sant Jarnail Singh Ji Bindranwale and General Subeg Singh. Shaheed Bhai Kulwant Singh from the village of Sada-Singh Wala is one of the lions from the army of lions that faught against the invading Indian army.

Bhai Kulwant Singh was born in the house of Sardar Gurdev Singh and from the womb of Mata Gurdev Kaur in August 1965 at the village of Sada-Singh Wala. Bhai Sahib was the eldest of 3 brothers, Bhai Nirmal Singh and Bhai Baljinder Singh, Bhai Sahib studied at a local primary school up until 5th class and passed his metric at high school of the village Dulapura. Bhai Sahib’s admission at Guru Nanak College in Moga was accepted.

Early months of 1984, CRP surrounded many gurudwaras of the Moga area in search of Bhai Sahib. At Gurudwara Singh Sabha the CRP made bunkers around the gurudwara and were preparing to invade to arrest Bhai Sahib. The president of Sikh Student Federation, Faridkot unit had forcefully attained the Presidency and was working with the Indian government. Soon as CRP asked the singhs to surrender, this so called president put his hands up and came out, while Bhai Sahib and rest of the Sikh Student Federation wouldn’t come out without a fight. Now the singhs of Sikh Student Federation were under the command of Bhai Sahib. Bhai Sahib saw CRP making bunkers at a nearby roof which overlooked the gurudwara. Bhai Sahib made them the target and threw a grenade at these CRP personnel, but the CRP returned fire, shooting Bhai Sahib in the shoulder. The blind firing of the CRP injured many innocent Sikhs, who came to gurudwara just to pay respects. Bhai Sahib fully fulfilled the role of a President and not running away as the so called president did. Bhai Sahib would put cold water on the bullet wound and carry on fighting along with rest of the wounded singhs. CRP had stopped people and goods from entering the gurudwara, CRP was puzzled on how the sighs are surviving for so long. In fact the women of the houses next to the gurudwara were giving the singhs food over the walls, this was the reason why singhs survived as long as they did. CRP felt stupid and unorganised as their operation did not finish as quick as they thought.

Finally the news had got to Sant Jarnail Singh Ji Bindranwale, who prepared a press statement telling the CRP to leave the singhs at Gurudwara Singh Sabha alone or the Punjab will come to fight the CRP. The Indian security forces got scared and quickly packed their bags and moved out of Moga. Then under the command of Bhai Sahib the singhs of Sikh Student Federation came out needing treatment for their wounds.

The family of Shaheed Bhai Kulwant Singh was harassed and tortured by the police after his shaheedi. The police would come to the house and ask for information on other freedom fighters. 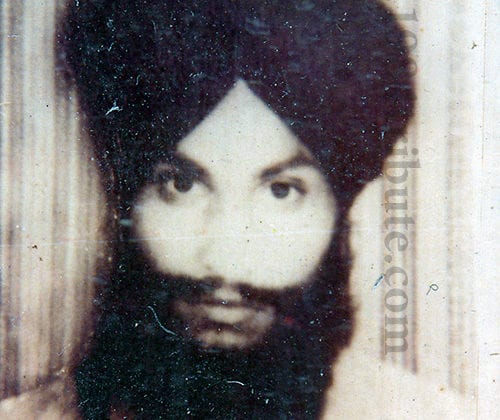