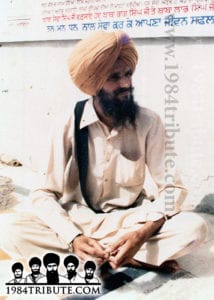 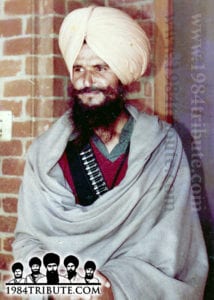 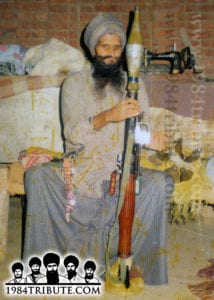 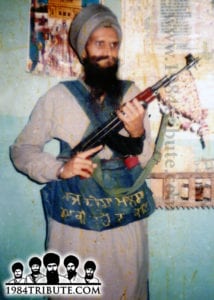 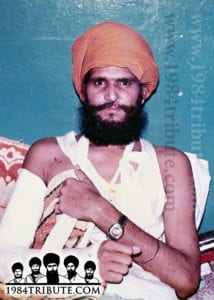 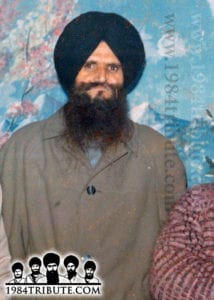 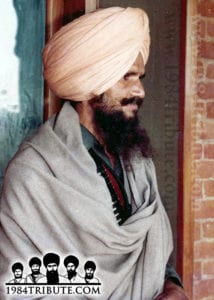 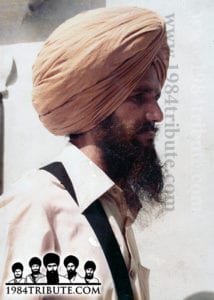 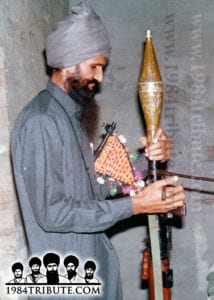 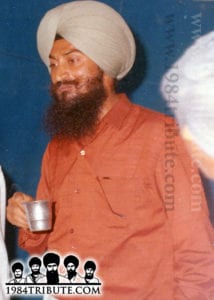 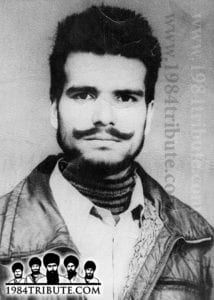 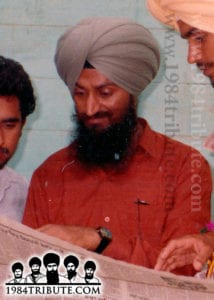 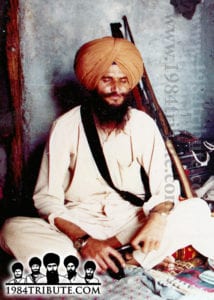 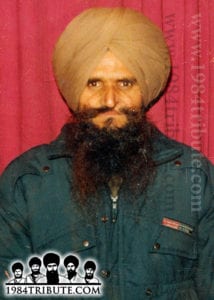 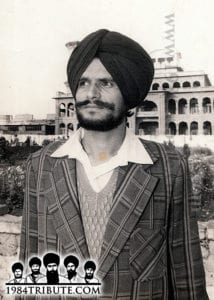 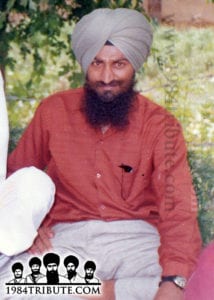 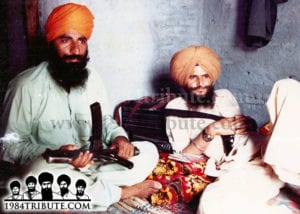 “No way! When I read the Sikh history, I wish that I was there, but today when history repeats itself, you want me to stay at home. No way, never.” These were the words of a Sikh close to Sant Jarnail Singh Ji Bindranwale, Bhai Anokh Singh Ubhoke, when a family member asked him to stay at home at the time of Sikh armed struggle. In these words one can see the bravery of a soldier wanting to serve its general, Guru Gobind Singh Ji. The life of Bhai Anokh Singh Ubhoke is full of bravery and courage that Bhai Sahib had shown.

Bhai Anokh Singh Ubhoke was born on 18thDecember 1952, in the house of Sardar Jaswinder Singh Fauji and from the womb of Mata Pritam Kaur in the village of Ubhoke, district Amritsar. Bhai Sahib was the eldest of 1 brother, Bhai Harpal Singh and 1 sister, Bibi Hardeep Kaur. Bhai Sahib did his primary education in the local school of Ubhoke, and then took admission in to a secondary school in village Bhamani Wali. When Bhai Sahib was in the 9thclass, he showed how brave he was.

The family had an old enemy in the village, who had killed the younger brother of Sardar Jaswinder Singh Fauji. The case had been resolved but someone pointed out the killer to Bhai Sahib. The 15 year old, Bhai Anokh Singh Ubhoke got his friends together and equipped with swords, killed the killer of his Chacha in broad daylight. After this revenge, Bhai Sahib was arrested and sent to Amritsar jail for 1 year. As the case was closed Bhai Sahib was released and came back home. Instead of starting to study again, Bhai Sahib helped his father in the farms.

Following this plan, the jeep of singhs was slowed down due to many trucks parked up. As soon as the jeep slowed down the police rained bullets on to what they thought was the driver, but the jeep was a foreign jeep the drive steering was on the left hand side instead of being on the right hand side. The police had killed the front seat passenger, Bhai Hardev Singh Rode with their LMG. 1000s of bullets had shredded Bhai Hardev Singh Rode as he fell out of the jeep and on to the road. As many bullets were fired upon the jeep, the driver, Bhai Kashmir Singh Driver was also shot and wounded. Bhai Sahib was one of the passengers in the back and was wounded due to being shot in the right arm, chest and the face but still showing bravery, Bhai Sahib quickly grabbed the body of Bhai Hardev Singh Rode and pulled it back into the jeep. The plan of the Indian security forces was now in shambles, as the police realised their stupidity, they fired even more bullets, but this time all over the jeep. The tyres of the jeep had blown up, but the singhs of Guru Gobind Singh Ji were not born to give up until they die. Bhai Kashmir Singh Driver drove the jeep straight through the bunkers of the police. The singhs got out of sight of the police and with the blessings of Waheguru somehow made it to Sri Harimandir Sahib, Amritsar where Sant Jarnail Singh Ji Bindranwale was staying.

June 1984, when the cowardly government of India attacked Sri Harimandir Sahib on the day of 5thNanak, Guru Arjan Dev Ji’s Shaheedi Purab. Bhai Sahib was placed to defend the complex from the bunkers of Sri Tharra Sahib. Bhai Sahib faught against the Indian army until 6thJune 1984, but after the ammunition had finished, the singhs from Tharra Sahib made their escape from the complex through Kathianwala Bazaar. Bhai Sahib managed to get to the village of Kotwali, here the army stopped Bhai Sahib. The army asked Bhai Sahib, “What are you doing here?” Bhai Sahib replied calmly, “I had a stall of peanuts outside Sri Darbar Sahib and lived nearby. My house has been burnt down.” Then the army officer asked which village Bhai Sahib was from, Bhai Sahib replied by naming a village of Uttar Pardesh and telling the officer that he had come to Punjab at a young age. Then the army asked of Bhai Sahib’s family, Bhai Sahib said, “My parents have passed away and have no family.” The army officer looked at the scar on Bhai Sahib’s face, Bhai Sahib said, “It is birthmark.” Then the army asked about the scar on his arm, Bhai Sahib replied, “I got this from cutting the crops in the farms.” A long and a very intense questioning was done. Bhai Sahib stuck to his story but out of the singhs that had been arrested earlier by the army, one identified Bhai Sahib as Bhai Anokh Singh Ubhoke, a close singh to Sant Jarnail Singh Ji Bindranwale. Bhai Sahib was instantly arrested and blindly tortured but Bhai Sahib did not say a single word. Then Bhai Sahib was sent Amritsar jail, Ludhiana jail, Nabha jail and finally ended up in Jodhpur jail.

Khadku Singhs started to visit Bhai Sahib at his family house but the police also started the harassment of Bhai Sahib’s family. Bhai Sahib left home and joined the armed Sikh struggle. Bhai Sahib started a freedom fighter group under the name of, Fauj-e-Khalsa of Khalistan. Now the game of hide and seek had started again between Bhai Sahib and the police.

The police was also informed about Bhai Sahib coming to Govindwal and police had surrounded the house Bhai Sahib was in. Due to Bhai Sahib being unarmed, he was arrested and was once again brutally tortured. Bhai Sahib did not give any information which could have led to other Khadku Singhs being arrested. In the end, on 24thDecember 1992 the police killed Bhai Sahib in a fake encounter. From the very beginning, Bhai Sahib was fearless and loved shastars (weapons). For this reason Bhai Sahib carried out some of the biggest actions within the Sikh Freedom Movement. 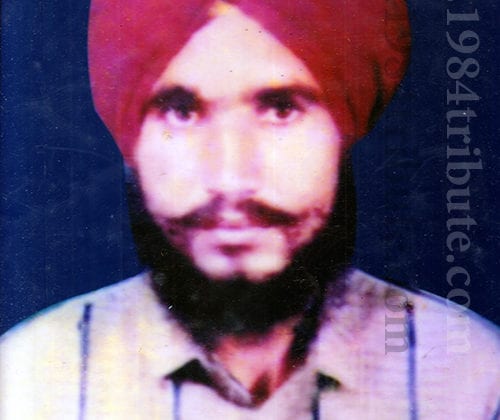 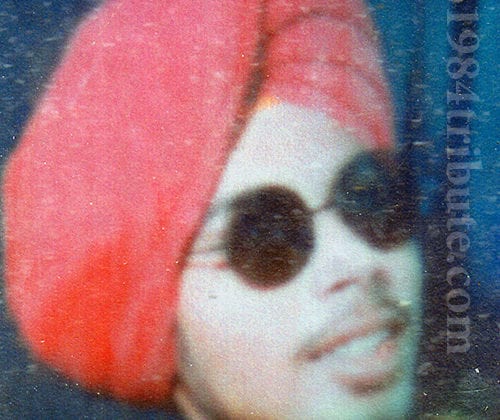