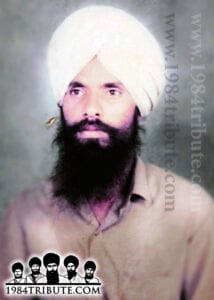 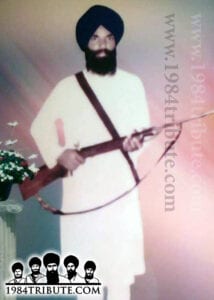 Bhai Husan Singh was born in the house of Sardar Kartar Singh and from the womb of Mata Asu Kaur in the village of Dhala, district Moga. Bhai Sahib was the 4th eldest out of 12 children of Sardar Kartar Singh. Bhai Sahib’s family were Majhbi Sikhs and Bhai Sahib himself did not study as from a young age he had helped his father in farming. Bhai Sahib was married to Bibi Surinderpal Kaur, the daughter of Sardar Karnail Singh from Ludhai-Ke village near Bagha Purana, district Moga. Bhai Sahib had 3 daughters and one son, Bhai Jagmohan Singh who was born few months after the martyrdom of Bhai Sahib. Bhai Sahib use to love going to cultural festivals in his area and he would take part in shooting games as his aiming was great.

Bhai Sahib use to regularly visit the Gurdwara of Bhindran village, and it was here he first came across Sant Jarnail Singh Ji Khalsa Bhindranwala. In 1981, Bhai Sahib was framed in a murder of a man from the same village as him. Bhai Sahib was convicted and sent to Ferozepur jail and after sometime in jail, Bhai Sahib met Bhai Sukhdev Singh Fauji and other Jhujaru Singhs linked to the group of Jathedar Gurdev Singh Kaunke. When the Indian government sent its army to attack Sri Harimandir Sahib in June 1984, Bhai Sahib was still in jail. From here on out, Bhai Sahib along with Bhai Sukhdev Singh Fauji had decided to avenge the attack on the Sikh throne and the mass murder of Sikh pilgrims.

On 17th April 1986, Bhai Sahib, Bhai Sukhdev Singh Fauji, Bhai Jasbir Singh, Bhai Balwinder Singh Engineer and another 2 inmates escaped from Ferozepur jail. This escaped was successful due to an inside hand of some police guards in the jail, a pistol had been supplied in to Bhai Sahib via large box of biscuits prior to the escape. These Jhujaru Singhs had made a ladder from plumbing pipes which was then used to climb up to a tower from where they escaped. This tower was called the ‘Red Round Table Tower’ but later was known as the ‘Husan Wala Tower’. After escaping jail, Bhai Sahib and Bhai Sukhdev Singh Fauji went to Chownk Mehta, the headquarters of Damdami Taksal, it was here Bhai Sahib took Amrit from Panj Pyare.

Bhai Sahib didn’t go home for 6 months as the local police was still looking to capture him. Bhai Sahib would only go home at for a few hours at night to see his parents, wife and daughters. Bhai Sahib had explained his role in the Sikh struggle and future plans to his wife, and Bibi Surinderpal Kaur supported her husband in every step of the way. Bhai Sahib said, “I was given a life sentence, and would be behind bars now. But after escaping, I’ve decided to dedicate the remainder of my life to the Sikh struggle.” Bhai Sahib then took his family to Chownk Mehta, where Bib Surinderpal Kaur also took Amrit from the Panj Pyare. After escaping from jail, Bhai Sahib remained in contact with Jathedar Gurdev Singh Kaunke. Bhai Sahib given regular duties and Kar Sewa responsibilities by Jathedar Gurdev Singh Kaunke. Bhai Sahib always encouraged his wife to remain strong and courageous, while he himself along with Bhai Sukhdev Singh Fauji remained underground. Bhai Sahib was given the alias name of Baba Phoola Singh for his loyalty and bravery.

Bhai Sahib would regularly visit home to see his family, but a local police informer had given this information to the local SSP, by the name of Gobind Ram. The Punjab police now had started tracking Bhai Sahib but with very little success. During being underground, Bhai Sahib assassinated 2 local police informers who were partly responsible for the police brutalities that Bhai Sahib’s family suffered. After this action, Bhai Sahib wrote a letter and challenged SSP Gobind Ram to meet for a real battle, and to stop targeting innocent Sikhs and the family members of Jhujaru Singhs. After this Bhai Sahib continued to punish corrupt police officers in the Faridkot area. Following this Jhujaru action of Bhai Sahib, SSP Gobind Ram had sealed of the Dhala village, and everyone was searched coming in or going out of the village at checkpoints. On the 4th day of this curfew, Bhai Sahib and his Jhujaru group of Bhai Billu Bakrian Wala and Bhai Harnek Singh Mistri attacked the CRPF checkpoints in Dhala village killing 4 soldiers. This Jhujaru action was glorified by the locals and gained much support for the Jhujaru Singhs. The following day the curfew and checkpoints were lifted from the Dhala village. People from the surrounding villages had great respect and love for Bhai Sahib and felt very fortunate if they made food for the Jhujaru Singhs. Bhai Sahib always stood with the locals and against the police injustice.

SSP Gobind Ram was very brutal police officer, and wanted Bhai Sahib captured dead or alive at all cost. But to release his anger and frustration, SSP Gobind Ram burnt Bhai Sahib’s house and the furniture too. Bibi Surinderpal Kaur, the wife of Bhai Sahib went to her parents with her daughters in Ludhai-Ke village. Meanwhile Bhai Sahib’s parents moved to another house belonging to Bhai Sahib’s brother. The Punjab police also targeted Bibi Surinderpal Kaur and her father, Sardar Karnail Singh who were both tortured and jailed in Ferozepur jail for 4 months. Then the local Jhujaru Singhs gave the Panchayats the duty to have Bibi Surinderpal Kaur and her father bailed from jail in 1987. Sardar Karnail Singh went to his home in Ludhai-Ke and Bibi Surinderpal Kaur returned back to Dhala village. Upon her return, she was arrested again by the Mehna police force. Bhai Sahib was given this news and was furious, he called the police station and demanded that his wife is released within an hour or he would blow up the police station up with everyone in it. The Mehna police force were shook and the officers blamed each other for arresting the wife of Sikh lion, eventually Bibi Surinderpal Kaur was released.

After the Thanedar assassination, SSP Gobind Ram arrested the wife of Bhai Sahib. At the police station, Bibi Surinderpal Kaur’s Kakkars were taken off her and was humiliated, but she remained strong, in the end, she was released. Due to the constant harassment of Bibi Surinderpal Kaur by the hands of Punjab police, Bhai Sahib moved his family to Chandigarh. It was in this house, Bhai Sahib planned many of his Jhujaru actions. Bhai Nirmal Singh (younger brother of Bhai Sahib) would help Bibi Surinderpal Kaur clean assault rifles in the Chandigarh house. Bhai Sahib was once asked a question by his wife, “Where do all these weapons come from? Is there a factory?” Bhai Sahib replied, “We don’t need a factory, we get these weapons from Pakistan, or we snatch them from the CRPF soldiers.”

On 3rd May 1988, Bhai Sahib was staying at house of Jora Singh, who had helped Jhujaru Singhs in the past in smuggling weapons across the border. Jora Singh had given into his greed and had poisoned Bhai Sahib’s drink. This newly turned police informant invited SSP Gobind Ram to his house to arrest Bhai Sahib and cash in on the reward. When Bhai Sahib saw SSP Gobind Ram the poisoned hadn’t taken its full effect and Bhai Sahib attempted to run, but the SSP shot Bhai Sahib in his ankle. SSP Gobind Ram did not want to kill Bhai Sahib straight away, he wanted to torture Bhai Sahib. After being shot and arrested, Bhai Sahib was taken to Mehna police station where his eyes were poked out with red hot iron rod and attained martyrdom. Shaheed Bhai Husan Singh Husana became a martyr of Khalistan.

Information given by the family of Shaheed Bhai Husan Singh Husana 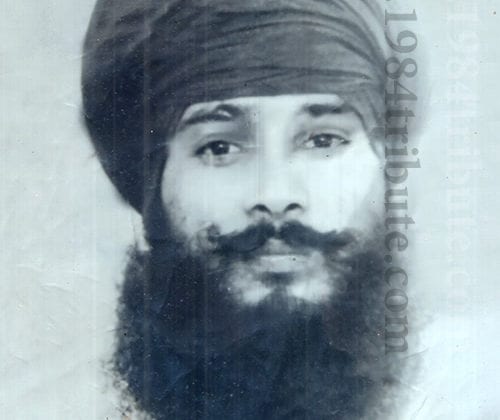