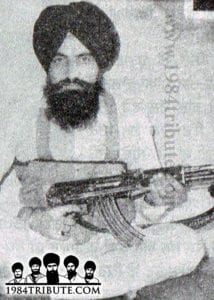 Gujjarwala village is in the Ludhiana district, the sixth Guru, Sri Guru Hargobind Sahib Ji Maharaj came to this village. It is in this village on the morning of Diwali, in 1963 a Sikh warrior was born, whom the family called Gurnam Singh. This child of Sardar Bachittar Singh and Mata Surjit Kaur was later known as Nikku in the area during the Sikh Struggle. Bhai Sahib was third eldest of four brothers, Bhai Shingara Singh, Bhai Manjit Singh and Bhai Baljinder Singh. Now only one brother is alive, Bhai Manjit Singh and one sister, Bibi Harwinder Kaur.

Bhai Sahib did not study much, he only studied up to four classes and then started helping his father in farming, other than that Bhai Sahib kept fit by doing exercise too. Bhai Sahib would daily jog to the nearby village and also do 100-150 squats. Bhai Sahib was a well-built athlete, tall and had a beautiful face, he was a top player in Kabbadi.

The Indian government at the time attacked Sri Darbar Sahib in June 1984. This attack left Bhai Sahib in disharmony and in dismay. Bhai Sahib went to Sri Darbar Sahib to give harvested crops for langar and after doing Darshan of Sri Akaal Takht Sahib he never came home for a month. When he came home, Bhai Sahib came in contact with Jhujaru Singhs such as, Bhai Jarnail Singh Halwara, Bhai Gurjant Singh Budhsinghwala and Bhai Jagroop Singh Khalakh. Bhai Sahib then shined like a star and made his own separate identity in the area.

At first Bhai Sahib did actions with Khalistan Liberation Force under the command of Bhai Gurjant Singh Budhsinghwala, but after he joined the Jhujaru Singhs of Khalistan Commando Force. In the Ilahabad Bank robbery Bhai Sahib was one of the eight Jhujaru Singhs named, as well as Bhai Jarnail Singh Halwara, Bhai Harwinder Singh Bunty, Bhai Rashpal Singh Cheema, Bhai Sarwinder Singh Bonny, Bhai Ravinder Singh Tinku, Bhai Jasmail Singh and Bhai Maninder Singh Batala. Bhai Jarnail Singh Halwara and Bhai Harwinder Singh Bunty managed to escape and reach Punjab, but Bhai Sahib and 5 fellow Jhujaru Singhs were arrested as they tried to escape. After his capture, the period of torture began. Bhai Sahib was handed over to Punjab police as he had Punjab state cases pending, such as attempted murder of Ludhiana Additional Session Judge, Roshan Lal Anand and another case was the murder of Thanedar Didar Singh. After a lengthy period of torture, Bhai Sahib was charged with many cases and sent you Nabha jail.

Bhai Sahib would go to Ropar for his court appearances. One day as the Punjab police was bringing Bhai Sahib and other inmates back from the court, one of the inmates was sick and puked over everyone who was sitting in the jeep. The police stopped the jeep at a hotel and told Bhai Sahib to go to be toilet and wash the vomit off himself. Instead of going to the toilet, Bhai Sahib took advantage of this situation and escaped. Now the government had put a reward of 1 Lakh Rupees on Bhai Sahib’s head. The Punjab police harassed Sardar Bachittar Singh for the location of Bhai Sahib. Trying to avoid the brutal treatment of the Punjab police, the family of Bhai Sahib moved to Rajasthan, but even here the police did not stop their injustices upon the family.

One day Bhai Sahib along with 5 fellow Jhujaru Singhs were resting at a house in the village of Panglia, someone had given this location to the Punjab police. The police had surrounded the village as well as the house in the early hours of the morning. As soon as Bhai Sahib saw the enemy approaching, he first helped 3 of his fellow Jhujaru Singhs escape from the back of the house and then he picked up his AK 47 assault rifle and started the battle. From 11am to 2pm Bhai Sahib didn’t let the enemy come close to the house. The locals of village Panglia told us, that Bhai Sahib shouted war cries of ‘Bole So Nihal Sat Sri Akaal, Khalistan Zindabad’ as he faught the enemy be himself. In the end, Punjab police called for backup, bullet proof tractors, CRPF were all trying to get close to Bhai Sahib. The battle continued for many hours. In the end on 24th December 1992, Bhai Sahib attained martyrdom.

Bhai sahib has fulfilled what he once said to his father, “Chacha, hopefully I won’t get killed while I’m asleep, but if they (Enemy) come to me while I’m alive then I will show them what happens when you mess with a Singh.” Bhai Sahib called his father ‘Chacha’. The other 2 Jhujaru Singhs that attained martyrdom with Bhai sahib we’re not identified, but one of them had ‘Bhola’ written oh his arm. 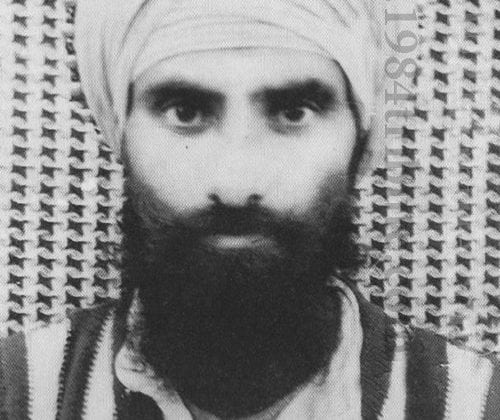