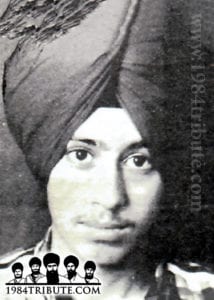 For India to be free, Sikhs have contributed the most, while being alive and also by sacrificing their lives. The courage and bravery that Sikhs get, is from Sri Guru Granth Sahib Ji, Sri Dasam Granth Sahib Ji, Sri Sarb Loh Granth Sahib Ji and the Sikh history. When the Sikhs are treated like second class citizens and regularly face injustice in supposedly their own country then the Khalsa lifts its weapons and fights for freedom, even if that country is one of the super powers of the world. In this world the human that fights for justice and equality is called an extremist, millions of Sikhs are looked upon as extremists today, why? Because the Sikhs stand up against the oppressing government, the government that made the rape of Sikh women legal as well as the burning of alive Sikh men? An outsider may call Bhai Tarsem Singh Karandhi an extremist, but for the Sikh nation he was a great martyr, who stood tall against the Indian tyrants.

That day at 10 o’clock Bhai Sahib bought food to his farms for the Khadku Singhs. Bhai Sahib met the Khadku Singhs, Bhai Ram Singh Karandhi told the fellow Khadku Singh, Bhai Balwinder Singh Bullet Babbar, “Jathedar Ji, this singh is my Massi’s son, Tarsem Singh and he wants to do sewa of the Khadku Singhs.” The Khadku Singhs replied, “His age is very young. No worries, he can provide the food for the singhs, this is a great sewa for him.” Bhai Sahib angrily replied, “The two young Sahibzade were not that old either, they in their small ages made the greatest sacrifices.” Soon Bhai Sahib joined Babbar Khalsa under the command of Bhai Balwinder Singh Bullet Babbar and started cleaning Punjab out of panthic enemy. For a long time Bhai Sahib remained unknown. Once Bhai Sahib was about go on an action, as Bhai Sahib left the house of a Gursikh, the Indian security forces. After a small encounter Bhai Sahib and fellow singhs managed to escape unharmed after a very short encounter. The police was angry that the singhs escaped and arrested the Gursikh whose house the singhs were staying at. This Gursikh could not take the torture of the police and gave two names to the police, one was of Bhai Ram Singh Karandhi and the other was of Bhai Tarsem Singh Karandhi. The police immediately jumped into their gypsies and rushed to the village of Karandhi. The police arrested many members of both singhs families and harassed them. The police was threatening the families to turn the singhs in to police custody.

The families and the houses of both singhs were completely destroyed by the Punjab police. The crops and the farms were also burnt by the police. The government officials that had participated in the killings of innocent Sikhs, were being punished by Bhai Sahib and other singhs of Babbar Khalsa. Those days the village of Karandhi was the capital of Babbar Khalsa. Now Bhai Sahib’s name was on the hit list of Punjab and Haryana police. Bhai Sahib was involved in all most every police action of Bhai Balwinder Singh Bullet Babbar. The family of Bhai Sahib was hiding and moving around Punjab to avoid the torture of the police, but this did not distract Bhai Sahib from doing panthic actions. Bhai Sahib punished many black cats and police informants. Once in an encounter in the village of Joian, Bhai Sahib and fellow singhs snatched the weapons of the Indian security forces and equipped his group, Bhai Sahib also took police uniforms and bullet proof vests, so the singhs of Babbar Khalsa are equipped as same as the Indian security forces.

Some days after the encounter of Joian, Bhai Sahib and fellow singhs went to Haryana under the command of Bhai Balwinder Singh Bullet Babbar. The police were stepping up the procedure by raiding more house of Sikh families and arresting more family members. One day Bhai Sahib, Bhai Angrej Singh Geja, Bhai Nihal Singh Barnala and Bhai Ram Singh Karandhi were surrounded by the police and encounter started. The singhs bravely faught the Indian security forces on the land of Haryana. Now the police knew Sikhs have entered Haryana, the singhs were doing actions in Haryana, punishing the Sikh enemies and straight after coming to Punjab to lay low. 26th July 1992, informants had the police surround Bhai Angrej Singh Geja, in this encounter Bhai Geja attained shaheedi. On the day of Bhai Geja’s last Ardas, all four informants were killed by Bhai Sahib and his group. The shaheedi of Bhai Angrej Singh Geja Babbar was avenged. The singhs of Babbar Khalsa are known to avenge the shaheedi of their fallen soldiers and not rest until it’s done. Bhai Sahib had done sewa within the Sikh Freedom Movement with singhs such as Bhai Balwinder Singh Bullet Babbar, Bhai Balwinder Singh Ganga Babbar, Bhai Bashir Mohammed alias Bhai Lachman Singh Babbar, Bhai Ghukar Singh Babbar, Bhai Amrik Singh Biru Babbar, Bhai Sukhdeep Singh Chirian Babbar, Bhai Nihal Singh Barnala Babbar, Bhai Ram Singh Karandhi Babbar, Bhai Makhan Singh Khayala Babbar and many more singhs. Now the generals of the Sikh Freedom Movement were being killed every day, black cats had fully infiltrated the movement and killed many Khadku Singhs. Even the once trusted families who provided shelter to the singhs were getting greedy for the reward and were calling the police to have the singhs arrested.

All three singhs attained shaheedi in this fierce encounter, but these Indian forces sent by Shera Singh and his nephew, Guddu had lost many soldiers also and all their equipment was now fully destroyed. After the encounter the police took the bodies of three singhs, the family were not given the bodies. These singhs destroyed two bullet proof tractors and a bullet proof vehicle, which still are at the police station of Rattian as the proof of the bravery of Bhai Sahib and singhs. The family of Bhai Sahib were arrested and bought to the same police station where the bodies of the singhs were kept. The police were naming Bhai Sahib’s body as Bhai Amrik Singh Biru Babbar. Police had told the press that they had killed Bhai Balwinder Singh Bullet Babbar, Bhai Amrik Singh Biru Babbar and Bhai Sukhdeep Singh Chirian Babbar in a big encounter, but Bhai Tarsem Singh Karandhi Babbar and Bhai Nihal Singh Barnala Babbar had escaped. When the family of Bhai Sahib saw the bodies of their son, they straight away said, “That is not Bhai Amrik Singh Biru Babbar, that’s our son (Bhai Tarsem Singh Karandhi Babbar). The police could not believe this and called the police of Hisar to bring Bhai Ram Singh Karandhi to Fatehabad, who had also been arrested for a separate action, to identify Bhai Sahib. When Bhai Ram Singh Karandhi entered the room where all the singhs were lying on the floor. It is said that Bhai Sahib’s body was shot at after he had died and the body of Bhai Balwinder Singh Bullet Babbar had many bullet wounds in his legs, one bullet wound was in his neck and one in the head. The body of Bhai Sukhdeep Singh Chirian Babbar was completely full of bullet wounds. The police were swearing at the bodies of these shaheeds saying, “These terrorists have killed 35-40 of our men.” But an inspector by the name of Inder Singh Saini told the police officer to shut up as they were scared of the singhs when they were alive and now that they have died the police officers are swearing at them. On 29th March 1993, the bodies of Bhai Sahib, Bhai Balwinder Singh Bullet and Bhai Sukhdeep Singh Chirian Babbar were taken to Hisar and cremated without any family members. 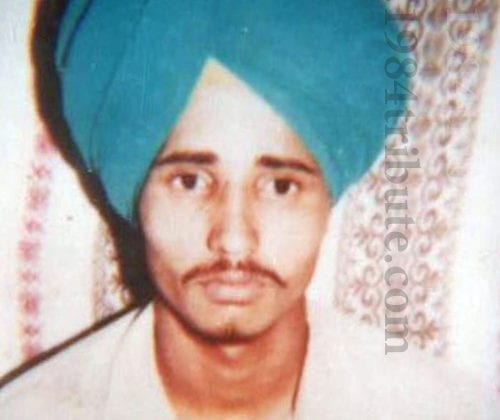 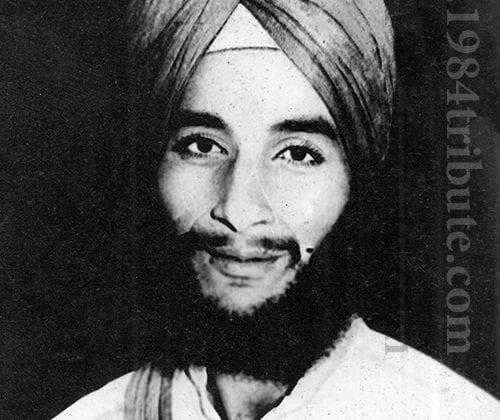 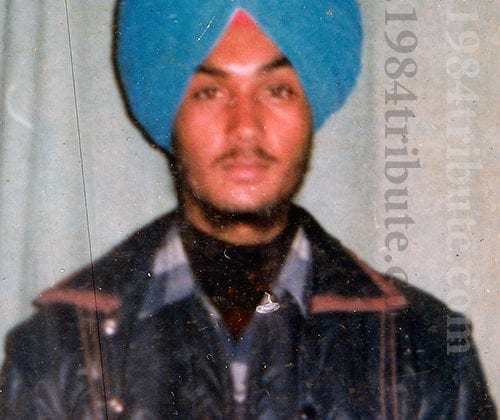