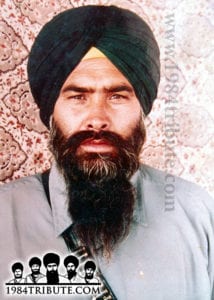 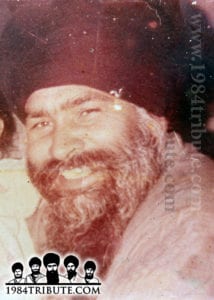 On 29th May 1981 in Amritsar, thousands of armed Hindus took to the streets holding Trishuls and long reach batons. The Hindus had tied cigarette and biri packets to their weapons and were shouting racist slogans such as, “Biri cigarette peeaygay, hum shaan se jeeaygay. Kach Kara Kirpan, Bhej daygay Pakistan.” The extremist Hindus had taken to the streets in this manner because the Sikhs had started a campaign to give Amritsar the status of a holy and pure city. Not only did the Hindus take to the streets in Amritsar, but they also went to Delhi to protest violently against the rights of the Sikhs in front of House of Parliament. Similar protests like these by the Hindus were waking up the Sikh youth across India. The Sikh youth realised the Hindus did not value the lives of the Sikhs that were sacrificed for the Indian independence and had treated Sikhs like beggars. The Sikhs were now being attacked by the very same people they once protected and guarded.

Now instead of asking for their rights, the Sikhs took the path of their father Guru Gobind Singh Ji. On this path the 20th century Sikh warriors cleaned the earth of many anti-Sikh elements and gave many sacrifices. This was history being rein acted. Amongst the Sikhs that gave their lives for the panth was Bhai Tarlochan Singh Lathuwala, who in June 1984 attained shaheedi in front of Sri Akaal Takht Sahib. Bhai Sahib was one of the singhs that faught the invading Indian army in June 1984.

Bhai Tarlochan Singh was born in 1942, in Lahore districts village of Kahnakachha, in the house of Sardar Jarnail Singh Sandhu and from the womb of Mata Swarn Kaur. Bhai Sahib was the second eldest of the 7 brothers and sisters. Short time before the India Pakistan partition Bhai Sahib’s family moved to Ganganagar in the Rajasthan state, where they stayed for 6 years and after moved to Tibi Talwarha. The family stayed here for a year and then moved to village of Kaluwala, district Ferozpur and then finally to the village of Lathuwala of the Mukhatsar district. Bhai Sahib studied up till 6th class in Ganganagar and after that Bhai Sahib started working at his farms. In 1962, Bhai Sahib joined the Indian army. Bhai Sahib guarded India for 2 and half years against China and Pakistan, but then came home due to personal reasons.

Bhai Sahib was also one of the singhs in the Jatha that went to protest against the Narakhdharis on 13th April 1978, in which 13 singhs attained shaheedi and more than 150 Sikhs were wounded. Bhai Sahib himself saw the shower of bullets on the unarmed Sikhs by the evil Narakhdharis while the police watched, all this had a deep impact on Bhai Sahib. Now Bhai Sahib had joined group of brave Sikh warriors under the command of Sant Jarnail Singh Ji Bhindranwale on full time basis.

In 1981, when Bhai Sahib came home on his brother, Bhai Puran Singh’s wedding, due to some informant informing the police of Bhai Sahib’s visit, the Punjab police arrested Bhai Sahib from home and took him to Delhi. This happened on 15th July 1981. After thus the family of Bhai Sahib went to Sant Jarnail Singh Ji Bhindranwale, who assured the family that he has appointed a lawyer on Bhai Sahib’s case and have Bhai Sahib freed as soon as possible. Sant Ji told the family to go and meet Bhai Sahib, rest will be taken care of by the lawyer. The police mercilessly tortured Bhai Sahib, but like a true saint soldier Bhai Sahib gave no information to the police. Bhai Sahib was sent to Tihar jail and after 3 months Bhai Sahib was released on bail, but after this Bhai Sahib never answered bail. Sant Jarnail Singh Ji Bhindranwale told Bhai Sahib, “Tarlochan Singh, now you don’t need to answer any bail. You don’t need to go to any court or police station. This Indian judicial system is not for Sikhs. Even when Sikhs produced evidence and witnesses, the Indian judicial system did not punish the killers of Sikhs. Now, we Sikhs should not expect any justice to be done by the government. Tarlochan Singh, you will now do sewa for only Sikh panth.” Like this, under the command of Sant Jarnail Singh Ji Bhindranwale, Bhai Sahib started fulfilling his panthic responsibilities by eliminating the evil enemies of the Sikhs. Bhai Sahib’s Khadku actions would send shivers into the enemies of the panth. In the 3 years of Bhai Sahib’s Khadku life, Bhai Sahib had punished many anti-Sikh elements.

After being released from Tihar jail, Bhai Sahib and his family started staying at Sri Darbar Sahib with Sant Jarnail Singh Ji Bhindranwale. Few days before the attack on Sri Harimandir Sahib, Sant Ji had told Bhai Sahib to leave and go back to his village with his family, but Bhai Sahib answered, “Mahapursho, I am only going to go where you go.” Then Sant Ji replied, “You have a family, a very young daughter, who will look after them?” Bhai Sahib without any second thoughts straight away said, “Sant Ji, if your family will be looked after, than what makes you think that Guru Gobind Singh Ji is angry with me, that they won’t look after my family? I am not going to leave you at all.”

Now the Indian army were ready to demolish the Mecca of the Sikhs, Sri Harimandir Sahib and eliminate the Sikh warriors stood guarding the complex. Little did the Indian army know, they must have thought they were going against some amateurs with no training, but under the command of Sant Jarnail Singh Ji Bhindranwale, Bhai Amrik Singh and General Shabeg Singh roughly 250 singhs and singhnia were ready to die protecting Sri Darbar Sahib and maintain the historic warrior tradition in the 20th century. The Khalsa army knew that they could not hold up the Indian army for long, but they had decided not to stand by and watch the Indian army destroyed Sri Darbar Sahib. The Khalsa army also knew that their sacrifice will open the gateway to the Sikh Freedom Movement for Khalistan.

On 6th June 1984, roughly about 9am the whole Sri Akaal Takht Sahib was in flames, Sant Jarnail Singh Ji Bhindranwale along with 50-60 singhs came out of Sri Akaal Tahkt Sahib to openly battle, Bhai Sahib was amongst these singhs with Sant Ji. Soon as the singhs came onto the Killing Ground, the tanks showered them with bullets and all the singhs attained shaheedi and finally rested in the laps of Guru Gobind Singh Ji. Later Bhai Sahib’s family was told by fellow singh of Bhai Sahib, that Bhai Sahib’s was found near the Darshan Deori. The Singhs and Singhnia attained shaheedi had showed the world that slavery is something we should not accept, freedom is every humans birth right. 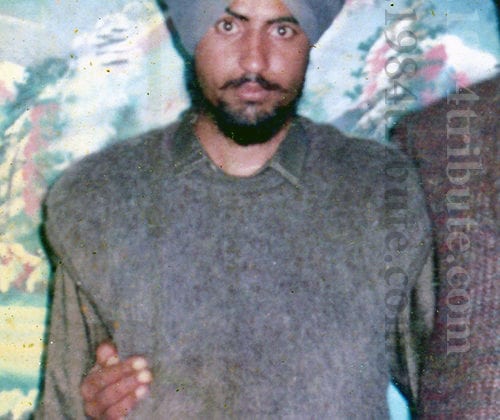