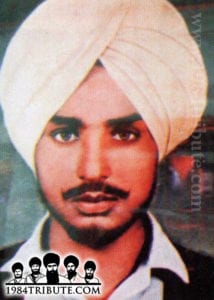 In the endless list of shaheeds is the name of Shaheed Bhai Sukhwinder Singh KC Sharma, who was rare diamond of the Sikh panth from the same group as Shaheed Bhai Sukhdev Singh Sukha and Shaheed Bhai Harjinder Singh Jinda. The price of such diamonds was soon known by the dealer of diamond, Sant Jarnail Singh Ji Bindranwale, when the Sikh Freedom Movement was started.

All the brothers would get together and regularly go hunting in the Mand area and due to this, Bhai Sahib had a great skill of aiming down the target. Bhai Sahib was also a fast driver, once it was the wedding of his cousin sister in Tarn Taran. The family made an immediate plan of sending Bhai Sahib to the wedding, Bhai Sahib took the Enfield Bullet and did the trip from his village to Tarn Taran which is 64km in 25 minutes.

Close friend of Bhai Sahib, Bhai Gurinder Singh Bhola of Tarn Taran had been arrested for the Delhi Manchanda murder case. Bhai Sahib along with Bhai Harjinder Singh Jinda played an important role in the attack on SSP Bhatti of Ludhiana. The police started coming to the family house but Bhai Sahib was never home.

Bhai Sahib was inside Sri Harimandir Sahib when the Indian government sent its army in June 1984 to attack the house of authority of Sikhs. When Bhai Sahib finished the ammunition at his bunker, Bhai Sahib made his way off the complex and into the house behind Sri Akaal Takht Sahib. After changing clothes Bhai Sahib grabbed an empty gas cylinder and walked out when the curfew was loosened for a short period of time. The Indian army stopped Bhai Sahib and started questioning, Bhai Sahib said, “I’m going to get my cylinder filled with gas, so the family can cook some food and eat.” Soon as Bhai Sahib crossed this the checkpoint, Bhai Sahib went into a house of a Sikh family. Bhai Sahib told the family the full story, one woman from the family agreed on helping Bhai Sahib get out of Amritsar. The woman grabbed a child and walked out with Bhai Sahib as though they were a married couple. Whenever the Indian army stopped Bhai Sahib, he would point at the crying child and say, “My child is ill, we are taking him to the doctor.” After reaching to a safe place and crossing all checkpoints, Bhai Sahib thanked the Sikh women and arranged for her to get back to Amritsar safely.

After the Sikh massacre of 1984 in Sri Harimandir Sahib, Bhai Sahib joined the Sikh armed struggle and started doing actions. Bhai Sahib was known to break into cars within seconds and without a key. Bhai Sahib had met Bhai Harvinder Singh alias Bhai Mathra Singh and both singhs went to Delhi. Here the singhs stayed at the house of Bhai Surjit Singh Penta. In Delhi Bhai Sahib met many more singhs and started planning to take the movement to new heights. As Bhai Sahib came to Delhi disguised, the singhs named Bhai Sahib, KC Sharma.

Bhai Sahib was in Delhi when Bhai Beant Singh and Bhai Satwant Singh punished Indira Gandhi and the Congress sent yobs of Hindu extremists to kill every Sikh. Bhai Sahib was ready for this as he had 2 Carbines, 2 Revolver38 and another revolver that was given to Bhai Sahib by Sant Jarnail Singh Ji Bindranwale. With these weapons the singhs protected the colony they were in and potentially saved many lives of Sikhs.

This was the last time Bhai Sahib came to his village but the police continuously harassed the family. The family was now scattered all over, to avoid the cruel treatment of the police, the police dug up the gates of the house and took them to the police station. This did not stop Bhai Sahib from doing the panthic sewa.

Then there was a mission in Bombay, Bhai Sahib and 2 more singhs started their journey to Bombay from Ludhiana in a Fiat car. In Rajasthan the police had checkpoints at every turn to catch smugglers. In Udhaypur the car singhs were travelling in was stopped at a big checkpoint, at this time singhs had 2 455 Revolvers of which one was in the case on one of the singhs and the other was in the glove box. The police started searching the singhs, the police inspector found a bullet in one of the singhs pocket, the inspector said, “What is this?” the singh replied, “It’s a tablet.” The officer was not happy with this cheeky answer and slapped the singh in the face. At this time Bhai Sahib was sitting the car and got the pistol ready if anything went wrong. As soon as the singhs got the chance, Bhai Sahib shot dead the officer the singhs also started firing at the officer and quickly got into the car. The police of Rajasthan was scared of these3 singhs of Guru Gobind Singh Ji. Bhai Sahib drove his car with full speed and managed to get out of the area. The time was about midnight and it was dark, nothing could easily be seen. The singhs braked hard at one of the turns which sent the car tumbling over, one of the singhs managed to jump out but Bhai Sahib and the other singh was in the car as the car tumbled into a deep hole. Bhai Sahib had broken one of the bones and was unable to walk, Bhai Sahib told the singhs, “Find the guns and shoot me, you guys must get out of here quickly.” But the singhs replied, “If you’re going to die then we will die together.” In the dark singhs tried to find the revolvers but had no luck. The singhs got Bhai Sahib out of the car and managed to get Bhai Sahib to the main road which led to Bombay.

On this main road the singhs tried to stop a truck, but because of thieves who looted truck drivers, no truck stopped for the singhs. At the end, the singhs found a house of Sikhs and here the singhs asked for help. The women of the house came out onto the road and flagged a truck, when the truck stopped the singhs got onto the truck whose driver was a Sikh youth and after thanking the women, the singhs told the driver the whole story, the driver helped put Bhai Sahib on upper seating deck so Bhai Sahib could rest. At checkpoints the truck was stopped, the police was looking for the singhs from the Fiat car. When the police saw the singh in the truck they talked amongst themselves saying, “Aren’t these the guys from the Fiat car?” But the singh remained calm, so the police did not get suspicious. After passing Rajasthan, the truck driver made a humble request to the singhs and said, “I don’t have the strength in me to take you any further.” The singhs thanked the truck driver for the sewa he had done and got off the truck. One of the singhs caught a bus to Bombay, while the other singh waited with Bhai Sahib and supported him in walking. After walking for about 3km, Bhai Sahib reached the railway station and caught a train to Bombay.

Bhai Harvinder Singh alias Bhai Mathra Singh advised Bhai Sahib to leave India as Bhai Sahib already had a passport on the name of KC Sharma. Bhai Sahib went to the airport twice but his heart did not agree on leaving the battlefield and came back to the hideout.

The Punjab police did not stop harassing the family of Bhai Sahib, but now the police of Pune, Bombay and Delhi were also visiting the house to harass the family and show warrants of Bhai Sahib’s arrest. The police arrested Bhai Sahib’s younger brother, Bhai Gurpal Singh and tortured him at the Mal Mandi torture centre in Amritsar. The police electrocuted Bhai Gurpal Singh, till today he is unable to walk or work. This cowardly act of the police did not stop Bhai Sahib from doing panthic sewa. Bhai Sahib was feared by the looters and gangsters, there was no looting in the area Bhai Sahib commanded.

By now the government of India had put black cats into the Sikh Freedom Movement. The weak hearted Khadku Singhs had sold themselves to the police and started giving information on the singhs of their Jathebandis. The arrest of Bhai Harjinder Singh Jinda and Bhai Satnam Singh Bawa in Delhi was due to information given by a black cat. Bhai Sahib kidnapped the black cat who worked with the police and had the singhs arrested, Bhai Sahib tortured him and after getting the truth out of the black cat, Bhai Sahib killed him.

Black cat Dalbira had infiltrated the group of Bhai Sahib. Bhai Sahib once was standing outside the PGI building in Chandigarh. Bhai Sahib Saw Dalbira pass by twice as though he had been keeping an eye on the singhs. Bhai Sahib said to the singhs, “If he passes again, I’m going to kill him.” But Dalbira did not come around.

The police themselves cremated the shaheedi saroop of the singhs, but father of Shaheed Bhai Harinder Singh Bunty had contact with high police officers and managed to be at the cremation of the shaheeds in Ludhiana. The cremation took place under heavy security and the ashes of the singhs were flawed into the river. The river took 2 warriors of the Sikh nation into its lap. Every living Sikh should remember the panthic shaheeds for the sacrifice for us to be a Sikh. 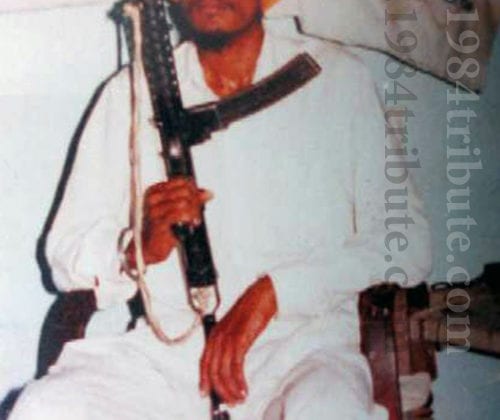 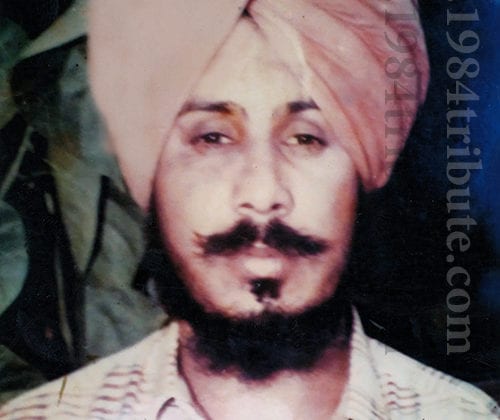