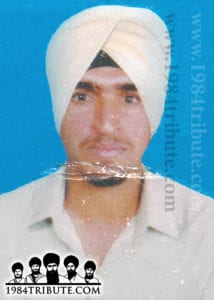 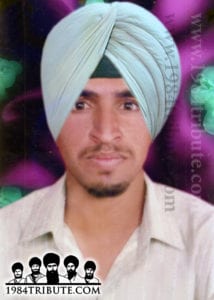 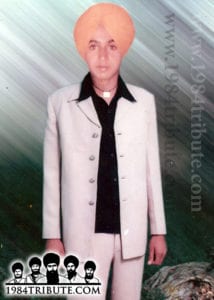 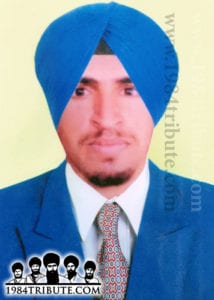 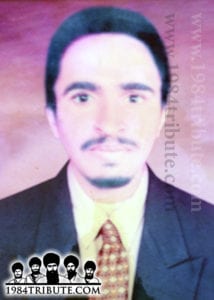 Whenever we talk about the involvement of Khalistan Liberation Force in the present Sikh Freedom Movement the names Shaheed Dr Sukhdev Singh Sukha and Shaheed Bhai Pargat Singh Fauji is bought up frequently with respect.

Bhai Sukhdev Singh Sukha Bhau was born in the house of Sardar Mohinder Singh and from the womb of Mata Surjit Kaur on 3rd April 1969 in the village of Khara, district Amritsar. In 1971, Sardar Mohinder Singh sold his land in Khara and moved to the village of Sangatpura, district Moga. Bhai Sahib was the eldest of the 5 brothers Bhai Baldev Singh, Bhai Dilbagh Singh, Bhai Sahib Singh and 1 sister, Bibi Balwinder Kaur. Bhai Sahib studied up until 8th class at local government school of Sangatpura and later passed 10th class at a school in the village of Tharaj. Then Bhai Sahib started studying at the village of Marhi Mustafa, after passing 12th class here, Bhai Sahib took an apprenticeship at Dr Balvir Singh’s surgery, which was also in Marhi Mustafa. At this time the Indian government had sent its army to Sri Harimandir Sahib and killed many innocent Sikhs who had come to do darshan of Sri Darbar Sahib on the shaheedi Purab of Sri Guru Arjan Dev Ji. Many youth Sikhs like Bhai Sahib felt the pain of this attack on the Sikh throne.

The family encouraged Bhai Sahib to open a surgery in the village of Hakumatsingh Wala. The surgery business was going good, but the police were suspicious that the Khadku Singhs were coming to Bhai Sahib to get medicine. The Ferozpur police arrested Bhai Sahib and Bhai Sahib once again faced blind torture for five days. The police said, “The Khadku Singhs come to you for medicine, give us information on them?” But Bhai Sahib replied, “How can I ask someone who comes into the surgery for medicine that if they are a Khadku Singh and which village they are from?” Father, Sardar Mahinder Singh and the local panchayat managed to free Bhai Sahib from the Ferozpur police. After being released, Bhai Sahib rested at home and some days later Bhai Sahib bought all of his stuff from the Hakumatsingh Wala surgery home. The family tried to get Bhai Sahib to open a surgery in Sangatpura, but Bhai Sahib said, “It’s not about opening a surgery anymore.”

The one day a messenger came to Mata Surjit Kaur and said that Bhai Sahib wants to meet her, but Mata Ji replied, “Why does he want to meet me?” The messenger said, “As Bhai Sahib has cut his hair, he feels upset knowing that his mother disappointed in him, after all, Mata Ji you looked after his hair all you’re your life. Bhai Sahib wants to apologise and said that if you don’t forgive him then even Guru Gobind Singh Ji would turn his back on him.” Mata Surjit Kaur went to Bir Baba Budha Sahib Gurudwara, soon as Bhai Sahib saw his mother he went to her and touched her feet. After standing back up, Bhai Sahib hugged his mother and Mata Surjit Kaur put her hands on Bhai Sahib’s face and said, “Son, what have you done? You had us take Amrit but you yourself have cut your hair. Have you forgotten the Sikh history, have you forgotten the history of Bhai Taru Singh Ji, Mai Bhago and other Sikh warriors? I rather hear the news of your shaheedi then see you like this.” Bhai Sahib kept on listening to his mother, then Bhai Sahib put his hands together and said, “Mother, please listen to me, I didn’t cut my hair because I am scared of the police. Our Jathedar, Bhai Gurjant Singh Budhsinghwala said we can’t do big actions with turbans and beards as we will get spotted instantly. I decided to cut my hair so I could do bigger actions in disguise. Today I am here to apologise to you mother, please forgive me.” Mata Surjit Kaur hugged her son and kissed him on his forehead.

On 29th July 1992, the Jathedar of Khalistan Liberation Force, Bhai Gurjant Singh Budhsinghwala attained shaheedi in a fierce encounter with the Indian security forces. This news was a great setback to the Sikh Freedom Movement and the Sikh nation. The Punjab Police and Punjab government were scared that the Khadku Singhs would plan actions as a revenge for the shaheedi of their general, Shaheed Bhai Gurjant Singh Budhsinghwala. The Punjab police quickly arrested the families of the Khadku Singhs of Khalistan Liberation Force and other freedom fighting groups. The Punjab police managed to arrest Bhai Sahib’s parents but brother, Bhai Baldev Singh had gone into hiding and passed his days. Sardar Mahinder Singh was kept a police station of Baagha Purana and Mata Surjit Kaur was kept at the house turned police station in village Choa. At this time the tag team of Beanta Butcher and KPS Gill was killing innocent Sikhs in fake police encounters.

Mata Surjit Kaur tells the story of her escape from the Choa police station:

That night I walked through the farms. After walking about eight kilometres, I reached the village of Jhok. I had tea from one of the houses here and started walking again. I kept walking till 4am amritvela, I saw a young man at a water tubal watering his farms. The young man asked what I was doing out at this time, I replied, “Son, my head is spinning, I can’t think. I want to go to the village of Tappe.” The young man made me tea and he was very caring. He pointed me on the path to village Tappe. I didn’t want to walk on the main roads as my clothes were dirty and if any police officer saw me, they would know who I am and arrest me again. So, to avoid that I started walking through the farms. As I walked through the farms, the young man came running to me and said, “Mata, you forgotten the way again?” Then that man dropped me off to village of Tappe on his cycle. We have relatives in Tappe village, I went to their house and changed me clothes. The police knew about this house as they had searched this house when my younger son, Baldev Singh was arrested and had kept a watch on this house. I didn’t stay at this house for very long, that day the bus drivers of Punjab were on strike, so I had hired a 3 wheeler auto to take me to another relative’s house in the village of Morh. The police didn’t know about this address. Thanks to Waheguru, I managed to get out of the police custody and to the village of Morh from Choa. Then after staying here for some time, I came to the village of Jhabbal, district Amritsar at another relatives house. Here I met my husband, Sardar Mahinder Singh who had also ran away from the police station of Baagha Purana. Whatever happened to me I have told you. I faced many difficulties.

News was printed in the newspapers, in September 1993, the police had stopped a truck in Rishikesh. The truck was driven by the Khadku Singhs of Punjab and the truck was full of weapons and ammunition. Bhai Kuldeep Singh Sheikhapura and Bhai Dayadeepak Singh of Khalistan Liberation Force swallowed a cyanide capsule each and attained shaheedi on the spot. The police managed to arrest Bhai Sukhdev Singh Sukha Bhau and Bhai Paramjit Singh. The police of Ludhiana were given the custody of these two singhs. The Punjab police told us nothing about Sukha or Paramjit Singh. The police didn’t declare them dead nor did they say that both singhs are in their custody. What should we do? We haven’t even done Sri Akhand Paath Sahib for the chardikala of his soul, if he is shaheed. We don’t know anything, if the Punjab police have killed Sukha or if he is in their custody. 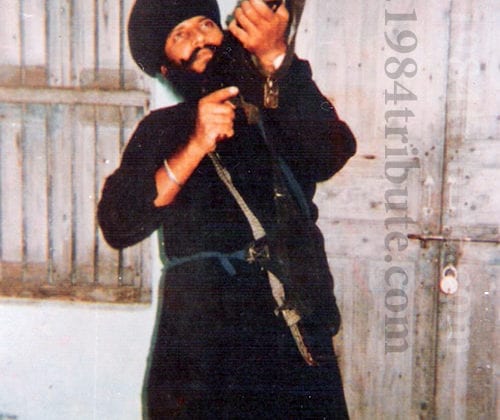 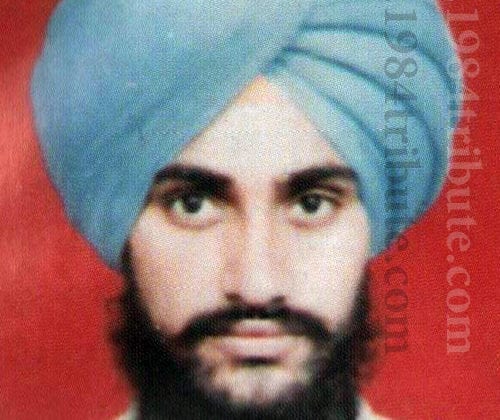