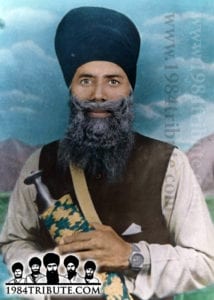 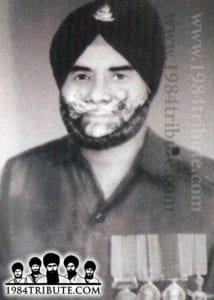 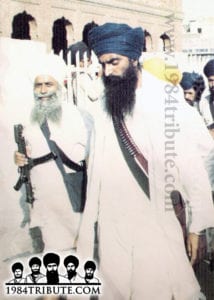 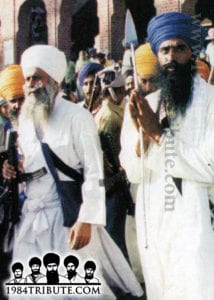 Under the command of Sant Jarnail Singh Ji Bindranwale and the battle strategy of General Subeg Singh, many Sikhs attained shaheedi Sri Harimandir Sahib, fighting the invading Indian army. One of the many Sikhs is Shaheed Bhai Subeg Singh Fauji.

Bhai Subeg Singh Fauji was born in the house of Sardar Hardial Singh and from the womb of Mata Narain Kaur in the village of Harike Patan, district Amritsar in the year of 1935. As Bhai Sahib had a healthy eating, his body built as a warrior. Bhai Sahib joined the Indian army at the age of 18 in 1953.

Bhai Sahib had joined the Indian army to fulfil his wish of being on a battlefield. In October 1962, China attacked India to push the Indian army back. Bhai Sahib was at home on holiday, but the telegram reached Bhai Sahib ordering him to return to the army base. Soon as Bhai Sahib read the telegram, Bhai Sahib started to get ready but his family did not want to him to go. Bhai Sahib told his mother, Mata Narain Kaur, “After ages my wish to fight in battle has come true and my family is upset.” Bhai Sahib quickly got ready and went on his way to the army base. When Bhai Sahib reached the base the battle against China had stopped. Bhai Sahib said, “My wish to fight in battle is yet to come true.” Bhai Sahib finally got his wish come true of fighting in battle. From April to September of 1965 India fought against Pakistan for the first time since the Partition in 1947, Bhai Sahib showed the Indian army his bravery in this war. Then again Bhai Sahib took part in the glorious and decisive victory against Pakistan in 1971. For his role in the army, Bhai Sahib was presented with many medals of honour.

Bhai Sahib got married in 1966 to Bibi Jaswant Kaur, daughter of Sardar Masa Singh from the village of Bhogpur. Bhai Sahib did not have any children after 6 years of marriage, Bhai Sahib made and humble request to Sant Kartar Singh Ji Bindranwale to do ardas for the family to have a child. Sant Kartar Singh Ji Bindranwale did the ardas amongst the sangat and a year later Bibi Jaswant Kaur gave birth to a Bhujangi Singh named Bhai Paramjit Singh and then the family had another Bhujangi Singh, who was named Bhai Surinderpal Singh.

13th April 1978, when Sikhs peacefully protested in Amritsar against the Narakhdhari cult, 13 Sikhs were killed and more 150 Sikhs were wounded by the bullets of Narakhdharis. Bhai Sahib also took part in this peaceful protest and was wounded by the shooting of Narakhdharis. One of the 13 Sikhs that attained shaheedi was, Shaheed Bhai Raghbir Singh. Shaheed Bhai Raghbir Singh was from the same village as Bhai Sahib’s in-laws and both singhs were close friends. Bhai Sahib took part in all Dharam Yudh Morche while Bhai Sahib worked at the bank as a security guard. When Sant Jarnail Singh Ji Bindranwale moved to Nanak Niwas permanently, Bhai Sahib came even closer to Sant Jarnail Singh Ji Bindranwale.

Now Sant Jarnail Singh Ji Bindranwale had to saint soldiers on his side, one was General Subeg Singh, who trained Jhujaru Singh in combat and made bunkers all over the complex of Sri Harimandir Sahib and the other was Bhai Subeg Singh Fauji.

At the house of Bhai Sahib had parkash of Sri Guru Granth Sahib Ji in one of the rooms, in which Bhai Sahib would also sleep in on the floor. Eldest son of Bhai Sahib, Bhai Paramjit Singh told us, when he was 13 years old, he used to beg his father to let him sleep with him in the where the parkash of Sri Guru Granth Sahib Ji was. Bhai Parmajit Singh also said that when he woke up sometimes in the middle of the night he saw his father sitting crossed legged and doing simran.

Bhai Sahib was so involved in Dharam Yudh Marche that he contributed his wages towards this cause, but when Sant Jarnail Singh Ji Bindranwale found out, he told Bhai Sahib off and told him to use the money at home for the family.

3rd June 1984, the curfew had been lifted for a few hours, father and wife of Bhai Sahib came to Sri Harimandir Sahib and met Bhai Sahib, begging him to come back home. But Bhai Sahib replied, “I’m not coming home, if Sant Jarnail Singh Ji Bindranwale decides to leave then I will leave with them.” Bibi Jaswant Kaur said, “The boys are missing you and want to see you.” Bhai Sahib replied, “If the curfew is lifted in the evening then bring the boys to meet me and if not the, Guru Rakha.” Bibi Jaswant Kaur left with her father-in-law and came home. The curfews did not open again and the battle had started.

Bhai Sahib was fighting from the bunker near Sri Akaal Takht Sahib where the puratan shastars are kept, from this bunker Bhai Sahib showered the bullets onto the Indian government. Bhai Sahib was glad that he was in a battle once again and for this time it was to keep the honour of Sri Guru Hargobind Sahib Ji Maharaj in high spirits. Singhs that made it out alive of this battle say that Bhai Sahib had stayed at this bunker till his last breath and no one could cause as much damage to the Indian army from this bunker as much as Bhai Subeg Singh Fauji did. Bhai Sahib stayed at this bunker from 4th-6th June 1984 and did not eat. When the singhs with asked Bhai Sahib to eat, Bhai Sahib replied, “If I eat then the Indian army will come down the stairs of the clock house (main entrance).”