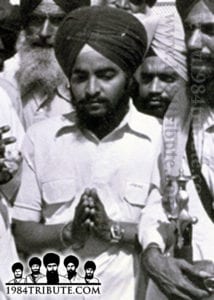 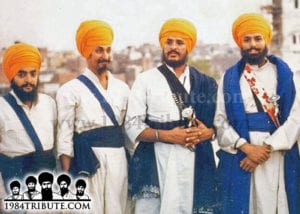 Shaheed Bhai Manmohan Singh Babbar is one of the warriors that gave his life, defending the rights of the Sikhs, but very little population of Sikhs know of him. Imagine the police handing over the wounded Bhai Manmohan Singh Babbar to the public and the police saying to the public, “This is the singh who did bomb blasts in Delhi, now you can punish him.”

Actually on 10th May 1991, in major cities such as Sirsa, Delhi and many more, transmitter bombs went off at the same time. Someone had informed the police that in west Delhi’s Patel Nagar, in the house of the income tax lawyer, Sardar Kartar Singh Narang’s house had been visited by suspicious singhs for last couple of days and the singhs might be linked to the bombings. Then on 12th May 1985, the armed police surrounded the address. When Sardar Kartar Singh Narang, Sardar Mahinder Singh Obroy and Bhai Manmohan Singh returned to Narang’s house from outside, the police attacked the singhs. Bhai Sahib’s pistol fell on the floor as the police tried to grab him, after this Bhai Sahib used his hands to keep the police off himself. But the police was heavily numbered and overpowered the singhs. Now the police now had arrested the wounded Bhai Sahib and others. The police was in civil clothes and the public of Delhi had gathered thinking the police has caught the Delhi bombers. The police announced to the public that the singhs are responsible for the transmitted bombings all over India. The provoked public threw stones and bricks at the singhs which led to Bhai Sahib being very badly injured.

The singhs were kept and inhumanly tortured at Delhi torture centre. When the police asked Bhai Sahib for his name, he gave the name given by Babbar Khalsa, Bhai Mahinder Singh Khalsa. The police then asked father’s name, Bhai Sahib said, “Guru Gobind Singh Ji.” Bhai Sahib was then asked his mother’s name and where he was from, Bhai Sahib said, ”Mata Sahib Kaur and I’m from Anandpur Sahib.” The police was getting frustrated on getting Bhai Sahib’s real information but Bhai Sahib like a true Sikh didn’t move an inch from his statement.

The Indian government knew that Sikhs were a big threat to their cruel policy towards Sikhs. The Hindu extremists such as Shiv Sena and RSS were scared of the Khadku Singhs as for their involvement in butchering Sikhs in November 1984 in Delhi.

The police was now crossing the lines with their torture on Bhai Sahib, but Bhai Sahib did not give any information to the police. Bhai Sahib was very weak due to the non-stop torture and was taken to Mohar Lohia Hospital for treatment. While on the stretcher Bhai Sahib recited Waheguru constantly. Even the doctor was shocked to see Bhai Sahib in so much pain but still in deep meditation. In the end Bhai Sahib attained shaheedi in the hospital, another singh killed by the government of India who had contributed his life towards the progression of the panth.

Bhai Manmohan Singh Babbar was born in 1958, in the house of Sardar Utam Singh and from the womb of Mata Harnam Kaur in the city of Amritsar. Bhai Sahib had 2 brothers, Bhai Harbhajan Singh, Bhai Harpreet Singh, 3 sisters, Bibi Harjit Kaur, Bhai Lakhvir Kaur and Bibi Maninder Kaur. Because of Bhai Sahib’s fair colour and his sharp eyes many people would just carry on starring at him. Bhai Sahib seemed soft hearted but was very hard from inside. In Partap Bazaar, Bhai Sahib’s family owned clothes shop. Bhai Sahib studied at DAV College and was a very intelligent student. Once Yogi Harbhajan Singh came to India from America and did many smagams, at these smagams Bhai Sahib attended and decided he will take amrit. Bhai Sahib father, Sardar Utam Singh took his son to Sri Akaal Takht and after taking amrit from the Panj Pyare, Bhai Sahib looked after each one of his 5 Kakkars. Locals were shocked to see Bhai Sahib’s love for the Sikh panth.

1978, now in his teens, Bhai Sahib was at the Akhand Kirtani Jatha Visakhi Mela in Amritsar, when the singhs got the news of the Narakhdharis disrespecting Sri Guru Granth Sahib Ji. Bhai Sahib joined the Sikh sangat that went to Sector B of Amritsar to hold a peaceful protest against the Narakhdhari cult. Bhai Sahib thought to himself, “How can someone come to the land of the Gurus and disrespect them?” But when Bhai Sahib witnessed the police and the Narakhdharis kill 13 Sikhs including Bhai Fauja Singh and wounding more than 150 Sikhs. This act of the Narakhdharis made many Sikhi youth like Bhai Sahib think, “If the Indian government can allow the killing of Sikhs and the disrespect of Guru Granth Sahib Ji, then what should the Sikhs do?” The cowardness of the Akalis was out in the open now, as Gurbachana the leader of the cult was escorted out of Punjab by the so called Panthic political party, the Akali Dal.

Beside Sant Jarnail Singh Ji Bhindranwale, Babbar Khalsa also announced war on the Narakhdhari cult. It is said that by December 1983, the Babbar Khalsa took responsibility of killings of 35 Narakhdharis.

Some of the anti-Narakhdhari actions:

The police had been harassing the family of Bhai Sahib since February 1983. DSP Gurbachana arrested Bhai Sahib’s younger brothers, Bhai Harbhajan Singh and Bhai Harpreet Singh and blindly tortured them to get information on Bhai Sahib. Because of this brutal torture of his brothers, Sant Jarnail Singh Ji Bhindranwale gave a speech in the Diwan Hall of Sri Manji Sahib on 27th February 1983.

For example, referring to the assurances given by the Inspector General of Police in the case of Harbhajan Singh and Harpreet Singh, Sant Jarnail Singh Ji Bhindranwale commented:

‘Deviously, they keep telling the President (of the Shromani Akali Dal) on the phone that the boys have not committed any offense. If they are innocent then why are they kept there, for fun? How long are we going to suffer this oppression?’

While staying at Sri Harimandir Sahib, Bhai Sahib always spoke of his love for Sikhi, but in the days of Dharam Yudh Morcha, many singhs were there for the wrong reasons. These singhs were called the ‘Turak’ army of the Babbar Khalsa. It is said the Turak army were abusing the power of the Babbar Khalsa on to the sangat of Sri Darbar Sahib. Bhai Sahib grabbed some of these Turaks and coloured their faces black as a punishment. But the Babbars had a word with Bhai Sahib, explaining that these Turaks can be used for weapons transactions or other hot missions. But Bhai Sahib and others Babbars kept a strict stand against such singhs that abused the power.

One day Bhai Sahib caught one of the members of Akali Dal cooking meat in one of the rooms provided for the sangat. As the singhs were going to let the expose him, Harchand Singh Longowal came to take the Akali Dal member. Bhai Sahib was furious on Akali Dal for allowing their members to cook meat on the complex of Sri Darbar Sahib and on top have the nerve to come and save that person. Bhai Sahib exchanged some harsh words with Longowal.

Bhai Sahib once called a shopkeeper of Amritsar to Sri Darbar Sahib. The shopkeepers were nervous and after having langar they met Bhai Sahib. Bhai Sahib asked, “Did your shop get looted?” The shopkeeper replied, “Leave it, Brother Leave it.” The singhs gave the shopkeeper all the money that had been looted and bought the singhs that had looted the shop and said, “These singhs have used our name and looted your shop.” Bhai Sahib then got a long thick stick and punished the looters and told the shopkeepers to go back and let everyone know, that no one should tolerate looting.

Bhai Sahib’s brother, Bhai Harbhajan Singh would regularly go and meet Bhai Sahib at Sri Darbar Sahib. One day someone asked Jathedar Sukhdev Singh Babbar, “You are a villager and your Manmohan Singh is an educated city boy. Do you think he can take the torture of the police?” Jathedar Sukhdev Singh Jathedar replied, “A body is a body, it’s not about village or the city. It’s about how we love Sikhi.” Once Bhai Sahib had said, “With the blessings of Waheguru, I will show everyone that I can take the torture of the police.” Bhai Sahib proved his words without saying a word and attained shaheedi.

June 1984, the Indian army attacked the Sri Darbar Sahib, but when the weapons of the Babbar Khalsa were no match to the Indian tanks, the singhs of Babbar Khalsa left the complex and promised to carry on the Sikh armed struggle outside the complex. On 4th June 1984 the Indian tanks came on to the complex. The Babbars knew that as Bhai Sahib was a local of Amritsar, he would know the way out from the complex. Bhai Sahib was given the duty of getting Jathedar Sukhdev Singh Babbar out of Amritsar to a safe place, which Bhai Sahib fulfilled with Bravery and intelligence. To avenge the attack on Sri Darbar Sahib, Bhai Sahib went to Pakistan along with other Babbars.

In Pakistan the arrested singhs would be sent to Faisalabad jail and from there they would be transferred to the camp where all the Babbars were together. Bhai Sahib was also arrested and made good contacts in Pakistan jails, Bhai Sahib would get Sikhs from different jails transferred to the camp and like this many singhs joined Babbar Khalsa. At this time Dal Khalsa’s Bhai Kanwarpal Singh was also in the jails of Pakistan. Bhai Sahib also took responsibility of Bhai Kanwarpal Singh and recruited him into Babbar Khalsa.

Bhai Kanwarpal Singh told us, “Bhai Sahib was a true saint soldier, some of the plans he was making were great. I joined Babbar Khalsa thanks to Bhai Sahib. The first time I met Bhai Sahib was at Nanak Niwas when the Indian army had attacked Sri Harimandir Sahib and then in Faisalabad on 25th September 1984. I couldn’t spend much time with Bhai Sahib because Bhai Sahib came back to Punjab. In the little time I spent with Bhai Sahib, I learnt a lot from him. His bravery and intelligence made Bhai Sahib one of the biggest shaheeds of the Sikh nation.”

In Pakistan the singhs found out about Indira Gandhi’s assassination and also about the aftermath which left thousands of innocent and unarmed Sikhs killed in 64 different areas of India. Babbar Khalsa decided that revenge will be taken for the mass killing of Sikhs. To complete such mission, Bhai Sahib, Bhai Iqbal Singh Babbar and Bhai Avtar Singh Pehlwan worked under the command of Bhai Anokh Singh Babbar and went to Delhi.

Finally on 10th May 1985, 7pm in the evening, bombs went off all over India. In parked up buses, in bazaars that had been closed and other public places.  The transmitters bombs were kept everywhere, few people were wounded but it was no match to thousands of Sikhs being raped and burnt alive.

The police somehow got the information that in western Delhi, in Patel Nagar, singhs had been visiting Sardar Kartar Singh Narang’s house. After the singhs were arrested, the police tried their best to torture the singhs and get information out of them but Bhai Sahib did not satisfy the police a single bit and attained shaheedi.

After Bhai Sahib’s shaheedi, the police got the full information on Bhai Sahib. The Delhi police went to Punjab and arrested Bhai Sahib’s father and took him to Delhi. Here Sardar Utam Singh was tortured and showed the photos and videos of Bhai Sahib attaining shahadat. 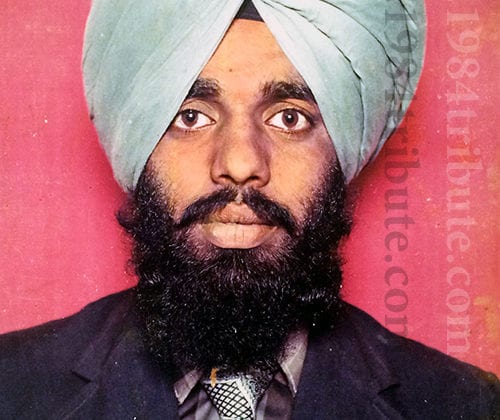