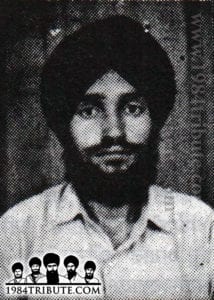 Sikhs have taken birth from the double edged sword and have always faught against the tyrants to claim victory. The attackers of Sikhi have never managed to sleep peacefully. Who ever wanted to finish the Sikhs off, have attacked Sri Harimandir Sahib from where the Sikhs get their spiritual and physical strength. May it be the Gangus or the Massa Ranghars that try and dishonour Sri Harimandir Sahib, but the Sikhs have always faught with their heads on their palms and showed the world that Sikhs don’t oppress and nor do they allow to be oppressed. In 1984, the racist Indian government sent their armed forces to Sri Harimandir Sahib to shut down the free voice of the Sikhs. Bhai Kuldeep Singh Keepa was only a child at the time of the attack and his innocent heart felt the pain of the attack. After the attack Bhai Sahib took amrit from the Panj Pyare.

Bhai Kuldeep Singh Keepa was the only son of Jathedar Pandher Sahib, who were altogether 4 brothers. Out of the 4 brothers only Jathedar Pandher Sahib had a child and for this reason Bhai Sahib was treated like a son by all 4 families. Bhai Sahib’s mother was a great woman who was deeply attached to Gursikhi. One day in the village of Kheri, which is close to Bhai Sahib’s village, the sarpanch of Kheri was killed by the Khadku Singhs. That day Bhai Sahib was helping his father at the farms and no one knew what had happened in the neighbouring village. Bhai Sahib and his father only found out when the Punjab police approached Bhai Sahib in their gypsy and asked his father if they had seen anyone go past as they sarpanch of Kheri has been killed. Jathedar Pandher Sahib said, “We have been here all morning and we have not seen anyone pass by here.” Upon hearing this, the Punjab police drove off. Couple of hours later the Punjab police once again drove down to Bhai Sahib’s farm, SHO Tiwari who was known for his hatred towards the Sikhs especially if they were Amritdhari, got out of the gipsy along with another 5-6 constables. SHO Tiwari shouted at the constables, “What are you looking at? Grab him (Bhai Sahib), he is a Amritdhari.” The constables threw Bhai Sahib into their gypsy, while Bhai Sahib’s father begged to SHO Tiwari, “He is my only son, please leave him. He has not done anything, he is innocent and has nothing to do with the Khadku Singhs. Please don’t take him.” But the cruel SHO did not hear a single word of the desperate father and took Bhai Sahib to Dhelon police station. Here under the command of SHO Tiwari, police tortured Bhai Sahib brutally by breaking his bones and even setting fire to his private parts.

It took many months for Bhai Sahib to fully recover from the ill torture of the Punjab police. The family thought it would be a good idea if Bhai Sahib got married. Some months later Bhai Sahib got married and as well as fulfilling the responsibilities at home, Bhai Sahib also started doing sewa for the panth. Bhai Sahib always thought that even though he was innocent, he had to go through racial discrimination along with blind torture of the Punjab police. It was in these days, Bhai Sahib met Professor Rajinder Singh Bhulara and started actions secretly. After a short while Professor Rajinder Singh Bhulara attained shaheedi. Now Bhai Sahib joined the Dr Pritam Singh Sekhon and Bhai Jagroop Singh Kalakh’s Khalistan Liberation Force.

SHO Bharat was transferred to the police station of Bhai Sahib’s area from the Ludhiana CIA branch. SHO Bharat also got the news of SHO Tiwari receiving a big some of cash to release Bhai Sahib and he himself became greedy too. Now SHO Bharat also tried to arrest Bhai Sahib so he also could scrounge money from the family. The SHO raided the house of Bhai Sahib, but luckily that day Bhai Sahib was not at home. The following day Bhai Sahib received a message that the Punjab police came to the house to arrest him. From here onwards Bhai Sahib did not go home and started openly doing actions under Bhai Gurjant Singh Budhsinghwala’s Khalistan Liberation Force. Due to Bhai Sahib’s great Gursikh Jeevan and big actions, Bhai Gurjant Singh Budhsinghwala nicknamed Bhai Sahib ‘Sap’ (snake).

Bhai Sahib’s singhni now started staying with her parents in the village of Kullarh. Soon Bhai Sahib’s singhni gave birth to a Bhujangi and Bhai Sahib clearly told his family that he will not return home and said, “My son will fill the gap that I will leave. I will be martyr of the Sikh panth on the battlefield.”

In February 1991, Bhai Sahib kidnapped a group of people that belonged to one community and after the mission was accomplished, Bhai Sahib made sure that every kidnapped person reached home safely, Bhai Sahib himself dropped them off to their doorsteps. This proved that a true Sikh of Guru Gobind Singh Ji would never hurt innocent people. In this action the Indian security forces held Bhai Sahib fully responsible and had deployed small teams to capture Bhai Sahib as soon as possible.

A black cat of SHO Bharat by the name of Gurdeep from the village of Cheema had given the Punjab police the information of Bhai Sahib’s hideout in Ludhiana. Within minutes the Indian security forces under the command of DSP Balbir Singh and SHO Bharat had surrounded the house that Bhai Sahib was in near the Ludhiana by-pass. That day more singhs were to attend a meeting which was to be held at this house later, Bhai Sahib’s singhni was already at the house. Bhai Sahib soon realised that he was surrounded and told his singhni that it would be difficult for him to get out of this co-ordination. Bhai Sahib said, “If I start an encounter, then you also will attain shaheedi with me. I will drink the nectar of martyrdom by swallowing a capsule Sy-Nyde. Once I attain shaheedi, you go outside and tell the Indian security forces that I have attained shaheedi. This way the Indian security forces will quickly do their formalities and go before rest of the singhs come for the meeting.”

Bhai Sahib took his Bhujangi into his arms and did Ardas, “O’Lord, I have done the sewa that you gave me, please keep my son in safe hands and when he grows up, give him the sea of being a guard of Sikh values. O’Lord, please protect my fellow singhs that are on their way here to hold a meeting.” After saying these words, Bhai Sahib said his final Fateh to his singhni and swallowed a capsule of Sy-Nyde. We must make a note here, Bhai Sahib did not swallow the capsule because he was a coward, this was done so Bhai Sahib could save his family and the singhs that were on their way to this house. This was a very big sacrifice by Bhai Sahib, to give up his own life to save the lives of others.

After Bhai Sahib attained shaheedi, his singhni went outside and shouted at the Indian security forces, “The person you came to get has become a martyr, what do you want now?” But even after hearing this, the police was too scared to go in the house. Now the police were given the accurate information of that there was to be a meeting held at this house. When the police did finally decide to move in, they noticed two singhs going towards the house on a scooter. The police tried to stop the scooter, but the singhs on the back of the scooter managed to get off and escape, while the police arrested the other singhs whose name was, Bhai Manjinder Singh. When Bhai Manjinder Singh was arrested, he pretended to put something in his mouth and the police thought that he too has swallowed the capsule of Sy-Nyde. Now the police didn’t feel the need to tie him as Bhai Manjinder Singh acted dead, the police put his body in the jeep. Once the jeep started moving, Bhai Manjinder Singh jumped out and managed to escape after throwing dust in to the eyes of the Punjab police. After escaping he went to the village of Kullarh and passed on the news of Bhai Sahib’s shaheedi.

Following this the thousands of Sikhs went to the Ludhiana police and managed to get the shaheedi saroop of Bhai Sahib and then held the cremation of Bhai Sahib at his home village of Kullarh. Hundreds of thousands of people attended the Sri Akhand Paath Sahib Ji, which was organised by the singhs of Khalistan Liberation Force in memory of Bhai Sahib. 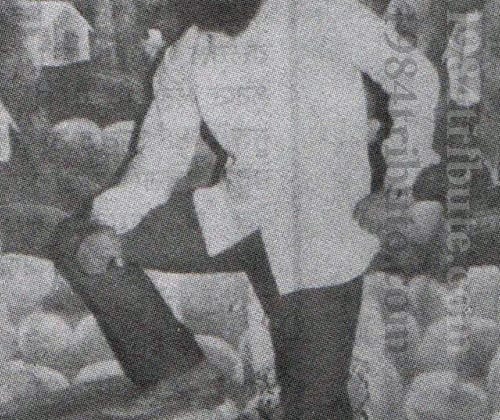 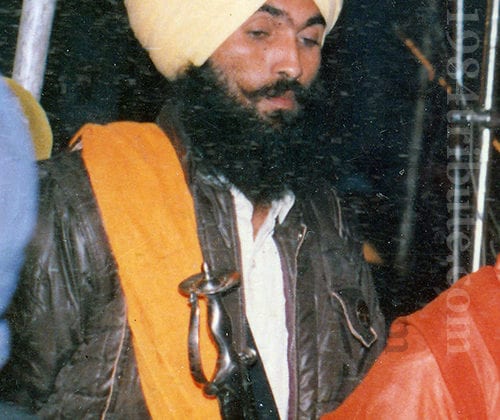