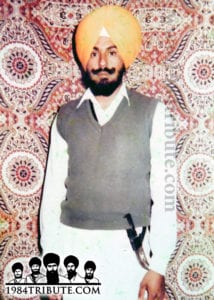 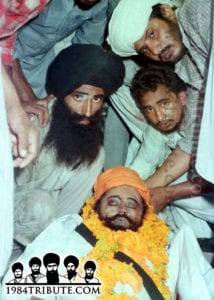 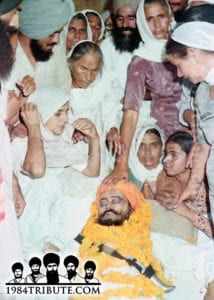 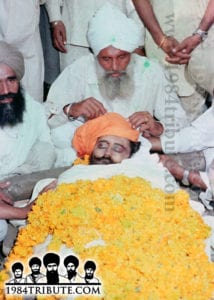 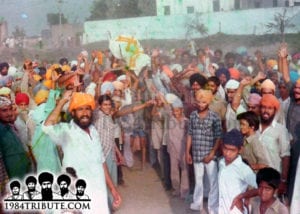 Bhai Harpal Singh Pappu studied at the local school of his village, Dasmesh Model School and after passed his metric from Sri Guru Ram Das Senior Secondary School of Amritsar. Bhai Sahib would also work with his father in the farms. From start, Bhai Sahib was into the Sikh values and had an honest thinking. Bhai Sahib was very close to Sant Jarnail Singh Ji Bhindranwale and Bhai Amrik Singh, the president of All India Sikh Student Federation. Bhai Sahib started doing sewa with the singhs of Sikh Student Federation. In 1978, when the Narakhdharis killed 13 singhs including Bhai Fauja Singh and wounding another 150 plus Sikhs, this was the start the Sikh Freedom Movement. From here on, Sant Jarnail Singh Ji Bhindranwale and the singhs of Babbar Khalsa decided that the Narakhdharis will have to pay for their crimes.

Many singhs were arrested due to this, Bhai Sahib, Bhai Amrik Singh, Baba Thara Singh, Bhai Swarn Singh Rode and Bhai Rup Singh were arrested along with other singhs. Bhai Sahib was brutally tortured at different interrogation centres. Bhai Sahib also spent time in various jails of Punjab, such as Amritsar’s Gumtala Jail, Ludhiana, Nabha, Ferozpur and others. Sant Jarnail Singh Ji Bhindranwale started a campaign for these singhs to be freed, the campaign came under the name of Dharam Yudh Morcha later. Bhai Sahib was later released. On 21st June 1982, Bhai Sahib, Bhai Amrik Singh and Baba Thara Singh attended a court hearing regarding the murder of Joginder Shaant. Bhai Swarn Singh Rode and Bhai Rup Singh could not make it to this hearing. The Additional Session Judge, GL Chopra dropped all charges against the singhs.

Now Dalbira Hawaldar started doing CID work on Bhai Sahib. Soon Dalbira reached the farms of Bhai Sahib. Here Dalbira and a colleague in civil clothes met Bhai Sahib’s brother, Bhai Mahanvir Singh, who was alone. Dalbira said Fateh to Bhai Mahanvir Singh and started asking about the family’s health. Dalbira said, “We are singhs also, you don’t need to be scared. We want to meet Bhai Harpal Singh, we were together in Mand. We were with Bhai Avtar Singh Brahma, and then we got separated. Bhai Harpal Singh told me that if we ever separated, then to come meet him at his farm and here i could meet him.” Bhai Mahanvir Singh became suspicious on these black cats and answered, “Bhai Harpal Singh has left home ages ago and has not returned since. We are farming and making ends meet. You are more than welcome here, but we can only give you water or tea.” The black cats had tea and when Bhai Mahanvir Singh asked them if they wanted food, they replied, “We are in a hurry as the sewa at Sri Akaal Takht Sahib is going on, we are going to eat at Paras Hotel along with other singhs, so please try and arrange a meeting between us and your brother.” Upon hearing this, Bhai Mahanvir Singh once again made it clear that Bhai Sahib has left home and has not returned. But Dalbira was not stopping, so Bhai Mahanvir Singh said, “If you are singhs then you might as well tell me your name. If someone comes to me then I will give your name to them.” Immediately Dalbira answered, “My name is Doctor and my fellow singh is called Jaggi, we are from the village of Rataul. When you tell them this, they will know who I am.” After saying this, Dalbira and colleague left, but Bhai Mahanvir Singh pulled out his dairy and wrote the name and the details of the scooter that Dalbira had come on.

After Dalbira left the youngest brother of Bhai Sahib, Bhai Inderjit Singh came to the farm also, as he had gone to the city to get some stuff from the market. Bhai Mahanvir Singh told Bhai Inderjit Singh everything and said that the two men were very suspicious and seemed like black cats. Bhai Inderjit Singh stayed at the farms while Bhai Mahanvir Singh went to Amritsar. That same night, at about 2am Dalbira and the SSP of Amritsar surrounded the farm along with 40-45 Indian security force vehicles. Bhai Inderjit Singh was sleeping, when Dalbira and fellow police officers started beating him on his bed. The police had taken Bhai Inderjit Singh for Bhai Sahib. Bhai Inderjit Singh shouted that he is not Bhai Sahib, but the police did not listen. The police said, “If you’re not Bhai Harpal Singh Pappu, then tell us where is he?” The police tied the arms of Bhai Inderjit Singh and took him to Amritsar’s Sadhar police station, here he was blindly tortured. At this time Bhai Sahib was also in the Amritsar area. When Bhai Sahib got the news of the harassment his younger brother went through, Bhai Sahib sent a message home and told the family to bail Bhai Inderjit Singh out and that Dalbira Hawaldar has crossed the line of tolerance. After many days of struggle the family and the panchayat managed to free Bhai Inderjit Singh from the police. Some days after Bhai Inderjit Singh was released Bhai Sahib and a cousin brother, Bhai Kuldeep Singh who also was a Khadku Singh surrounded Dalbira Hawaldar as he was on his way home. Bhai Sahib said, “Dalbiraya, if you want to run then run now. Today your death stands in front of you.” Dalbira dropped his scooter and started running. It wasn’t long when the revolver of singhs blasted bullets towards Dalbira. Dalbira had dropped to the ground as he ran through the bazaar. The public were scared and went into their homes. The singhs kicked Dalbira and said, “Get up you evil man, today we will not let you go alive.” When the singhs moved Dalbira, they saw that he was not breathing. Dalbira was dead and the singhs made their escape.

Soon as the SSP of Amritsar found out about the killing of Dalbira Hawaldar, he raided the house of Bhai Sahib, but none of the family members were at home. After searching the house, the police returned to the police station. The family already knew that Dalbira has been punished by Bhai Sahib and the police would come and for this reason the family of Bhai Sahib were not at home. The police had upped their harassment on the family but the family had started living away from home and passing time like that.

Some days later, one night a news came on a TV that in Ferozpur two singhs of Babbar Khalsa have been arrested. The police had set up a checkpoint when a sky blue Fiat car was stopped and when the singhs tried to speed their car up but got stuck in the side of the road. The following morning, the newspapers printed the main headline, “Two dangerous Khadku Singhs of Babbar Khalsa, Bhai Harpal Singh Pappu Sultanwind and Bhai Avtar Singh Parha have been arrested as they travelled to Ferozpur. From the Fiat car, a big quantity of ammunition was found in the possession of the Khadku Singhs. The police have said that these Khadku Singhs were wanted by the Punjab police for 50-60 murders. The police had put a reward of 50,000Rs on the head each of these Khadku Singhs.

On 11th October 1986, as Suri was bringing the singhs from Ferozpur, he stopped the jeep near the Harike area, at this time Suri was heavily drunk from alcohol. Suri took the singhs out of the police gipsy and said, “If you want to run then you can run, you have my permission.” Bhai Sahib knew that Suri wanted to kill them and replied, “Suri, we are not going to run away from you, only to be shot in the back. If you want to kill us the shoot us in the chest.” The locals heard the shouting of the police and the singhs, it is said that Bhai Sahib shouted that he will not let the police shoot him in the back to make the headlines of a Khadku Singh being shot in the back while he tried to run away. The locals also say that they heard sounds of some bullets being fired and all the shouting stopped.

Following morning the newspapers wrote headlines in big letters saying, “Two dangerous Khadku Singhs of Babbar Khalsa, Bhai Harpal Singh Pappu have been killed in intense encounter when the their fellow singhs from Babbar Khalsa attacked the police near the Harike village as the police was transporting the two Khadku Singhs. In this encounter Bhai Harpal Singh Pappu has been killed while Bhai Avtar Singh Parha escaped with fellow singhs.”

The locals said that it was the police that killed Bhai Harpal Singh Pappu and there was no one that attacked the police that night. It is said that the police either killed Bhai Avtar Singh Parha and the police has lobbed his body in the river of Harike or they still have him in their custody. It is also said that the police had tied the body of Bhai Harpal Singh Pappu to a tree and blasted his body with bullets. As the police read these headlines on the newspapers, the police force also came to the family house. The police told the family, “Your son, Bhai Harpal Singh Pappu has been killed in an encounter against the police. You can go and get his body, his post mortem will happen in Patti.” The family had Bhai Sahib’s post mortem done in Patti and after bought the shaheedi saroop home. As the locals knew that this was fake encounter, when the shaheedi saroop of Bhai Sahib came home the locals shouted slogans against the Punjab police, “Punjab Police Murdabaad”, “Harcharan Suri Murdabaad”. The police were shocked at this and had sealed off the area, all the roads that went to Bhai Sahib’s village were sealed off.

Sometime later Bhai Dharam Singh Keshtival and group punished Harcharan Suri for his crimes by blowing him up into pieces with a bomb at the police training camp in Phillaur. Shaheed Bhai Harpal Singh Pappu attained shaheedi on 11th October 1986, the family holds a Sri Akhand Paath Sahib every year on 11th October and the bhog is done on 13th October. 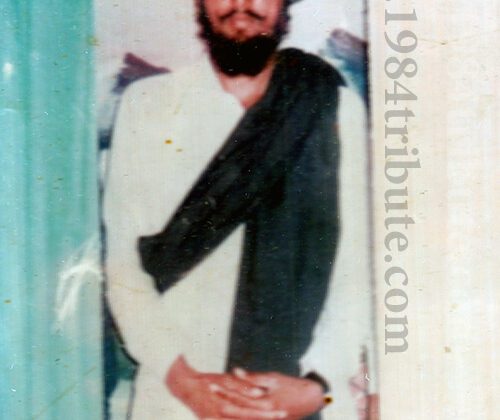 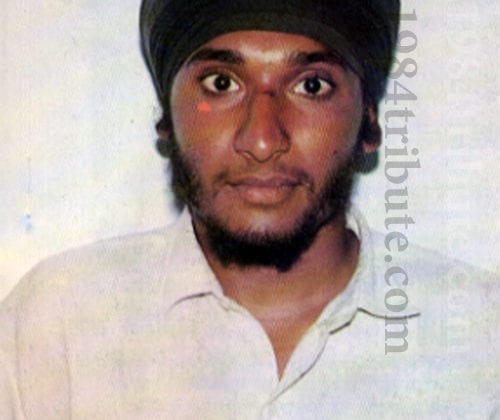