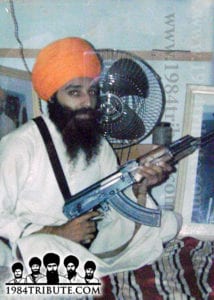 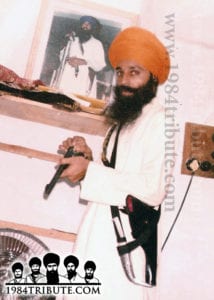 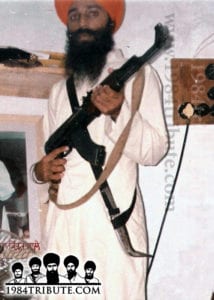 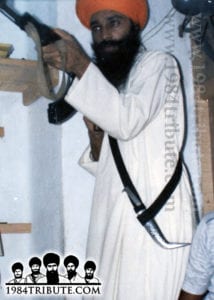 In the movement started by Sant Jarnail Singh Ji Bhindranwale for the human rights of Sikhs in India, Bhai Daya Singh Chola Sahib is one of the great warriors that gave his life for the positive cause. Bhai Daya Singh Chola Sahib born in the house of Sardar Surjit Singh and from the womb of Mata Niranjan Kaur in the village of Chola Sahib, district Tarn Taran. All together Bhai Sahib were 7 brothers and sisters, here are the names in order from eldest to youngest. Bibi Ranjit Kaur, Bibi Surinder Kaur, Bibi Gurbachan Kaur, Bhai Daya Singh, Bhai Bhagwant Singh, Bhai Kartar Singh and Bibi Sukhraj Kaur.

Bhai Sahib did his primary education at a local government school of Chola Sahib, and then Bhai Sahib went to study at a school in Amritsar. Bhai Sahib passed his BA at Khalsa College, Amritsar. By now Bhai Sahib had recited many Gurbani of the Sikh faith and knew them by heart.

On a religious level, Bhai Sahib was close to singhs of Sarhali Jatha and also took amrit from them. Bhai Sahib was studying at Khalsa College, in April 1978 when the 13 singhs were mercilessly killed for peacefully protesting against the Narakhdhari cult. This injustice on the Sikh faith was a wakeup call for millions of Sikhs around the world and this was the case with Bhai Sahib too. After joining the Sikh Student Federation at his collage, Bhai Sahib started meeting the 20thcentury Sikh saint soldier, Sant Jarnail Singh Ji Bhindranwale regularly. Bhai Sahib would hymn the words sang by Bhai Joga Singh Jogi,

Sometimes humming these words, tears would come into the eyes of Bhai Sahib in memories of the shaheed singhs.

Bhai Sahib’s elder sister was married to Bhai Pritam Singh and lived in the quarters at Sri Darbar Sahib, as Bhai Pritam Singh was a sewadar at Sri Harimandir Sahib. On the excuse of visiting Bibi Ranjit Kaur, Bhai Sahib would come to Sri Darbar Sahib and also meet Sant Jarnail Singh Ji Bhindranwale to have lengthy discussions. Thorough Sant Jarnail Singh Ji Bhindranwale, Bhai Sahib got close to Baba Gurbachan Singh Manochahal. Now Bhai Sahib had met his fellow soldiers and soon a Khalsa army would form to deliver justice to the Sikh nation of the killings of innocent Sikhs.

Bhai Sahib got his younger brother, Bhai Kartar Singh an admission at Shaheed Sikh Missionary College and after Bhai Sahib started staying here in the quarters of his brother. No one knew of Bhai Sahib’s action, the family only found out about Bhai Sahib’s involvement in the Sikh Freedom Movement, when a big team of police came to the college and started asking the students and the teachers, “Where is Daya Singh?” The principal of the collage, Sardar Parkash Singh told Bhai Sahib to escape as the police are looking for him. As the Principal distracted the police Bhai Sahib managed to escape from the college complex. The principal told the police that there is no Daya Singh at this college.

On the evening of 9thJanuary 1988, Bhai Sahib was with Bhai Balbir Singh Vanchirdi resting at the farm of Sardar Puran Singh in village of Vanchirdi. An informant gave the information to the police about Bhai Sahib. The police surrounded the singhs in Vanchirdi, 10thJanuary 1988, Bhai Sahib was getting ready to have ishnan to do Nitnem, but Bhai Sahib suddenly saw the police moving. It was 7 o’clock in the morning, Bhai Sahib picked up assault rifles and along with Bhai Balbir Singh Vanchirdi tried to escape from behind the village as Bhai Sahib thought the police may not have surrounded the full village. But the police in fact did surround the village and was waiting with loaded machine guns.

As soon as the police saw the singhs, the opened blind fire towards the singhs. Bhai Balbir Singh Vanchirdi attained shaheedi on the spot after being shot by the police. Now Bhai Sahib raised his assault rifle and fired back, but the police had surrounded the village in layers, if Bhai Sahib got through one layer of police, the next one would be CRP and so on. Bhai Sahib attained shaheedi fighting the Indian security forces.

At this time Baba Gurbachan Singh was at the village of Dugalwal. Baba Manochahal called his friend from Vanchirdi, Bhai Amarjit Singh as asked him to explain what had happened.

When the family held a Sri Akhand Paath Sahib for the chardikala of Bhai Sahib, the DIG, SSP and under the command of other officers the police, CRP and BSF were deployed all over Tarn Taran to stop Sikhs from attending the Sri Akhand Paath Bhog. Any Sikh male that was seen was arrested and taken to the nearest police station. Even Sardar Surjit Singh and Bhai Sahib’s brother, Bhai Bhagwant Singh was arrested as they went to get a Rumalla Sahib for Guru Granth Sahib Ji. Both father and son were put into a gypsy and drove about by the police.

After the family got worried they asked the police that was stationed in Chola Sahib and through wireless set the police found out that Sardar Surjit Singh and Bhai Bhagwant Singh have been dropped off at Sarhali police station. At Sarhali police station a police officer asked Sardar Surjit Singh, “The centre government has given us a report that Baba Gurbachan Singh Manochahal will come to Bhai Sahib’s house to pay respect to a fallen soldier of his group, that’s why we are everywhere like hungry dogs. We didn’t want to arrest you but the higher authority had ordered us. Do this is you do see Baba Manochahal then let him know we are looking for him and tell not to come to your house at all.”

Sardar Surjit Singh and Bhai Bhagwant Singh thanked the police officer at Sarhali police station and made their way back home. When Baba Manochahal found out about this entire situation, he told the family to only do kirtan and not do any speeches.

Two years after the shaheedi of Bhai Daya Singh Chola Sahib, Baba Manochahal started visiting the family home. At the time when the government of butcher Beanta came into power in Punjab, Bhai Sahib’s family faced much torture by the Indian security forces. 2ndAugust 1992 the police arrested Sardar Surjit Singh, Bhai Bhagwant Singh and along with another 17 or 18 singhs were killed in a fake encounter. There was much uproar of this fake encounter in the media, but the Indian government felt no shame. The family of Shaheed Bhai Daya Singh Chola Sahib have sacrificed a lot for the Sikh nation. We the Sikhs must never forget our fallen soldiers of the Sikh armed struggle. 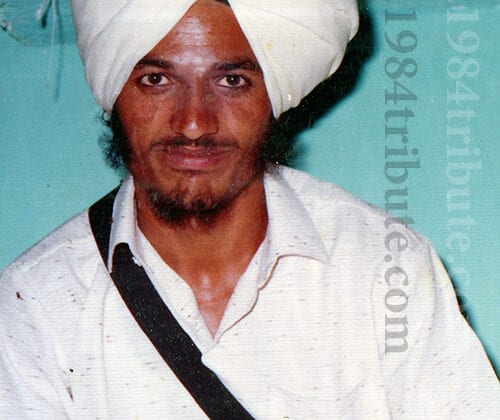 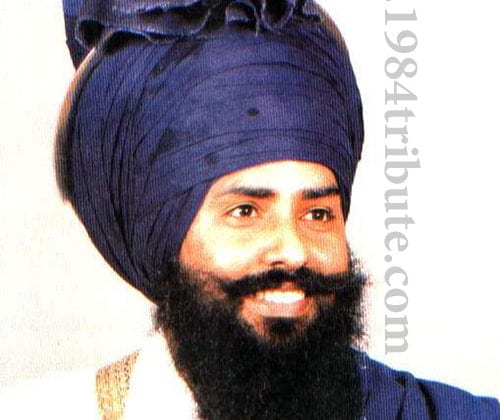