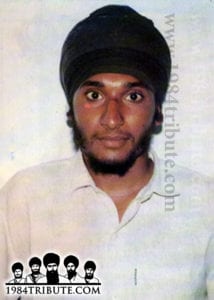 Shaheed Bhai Bagel Singh was warrior who done what he said, Bhai Sahib was born in the womb of Mata Gurbaksh Kaur and his father was Sardar Kehar Singh, he was born in a village called RamRai Tehseel Nawa Shehar district Jhallandar. Bhai Sahib received his primary education at the local school in his village. From a young age Bhai Sahib was very religious and used to do a lot of sewa at his local gurdwara with a lot of love and dedication. Just after the events of June 1984 Bhai Sahib Ji had gone to Amritsar to visit Sri Harmandir Sahib, Bhai Sahib couldn’t bare the sight of what the Indian Army done to the Darbar Sahib. After seeing Sri Akal Takhat Sahib destroyed Darbar Sahib was pierced with bullets, the Langar Hall, Guru Nanak Niwas, Guru Ram Das Sarai, Samundari, Sikh Library, Sikh Museum burning away, set Bhai Sahib heart on fire and Bhai Sahib took Amrit. Bhai Sahib joined the Babbar Khalsa Jathebandi and entered the battlefield to take revenge for the disrespect that was happening at Guru Ghars by the Indian Army and for all the innocent people that they killed. Bhai Sahib spent a lot of time with the Babbars and played a big part in the struggle to obtain Khalistan. Whenever Bhai Sahib used to go meet his mother he used to tell her that a Khalsa can never live like a coward and that it isn’t part of their dharam, and that they don’t fear death and stand against injustice and protect the weak.

Bhai Bhagel Singh Ji’s elder brother was a head granthi at Guru Arjan Dev ji Gurdwara in Derby, UK. Bhai Sahib was only 21 years old and he was fighting in the struggle for the independence of Khalistan, for the sacrifices his fellow Singhs made and for the right of the Sikhs. Bhai Sahib obtained shaheedi on the 18th of November when he was in a fierce battle at a Village called Mangal Chuk, Tarn Taran. On the 7th of December the Babbar Khalsa Jathebandi held an Akhand Panth in a secret location for Bhai Sahib so that his soul would rest in peace. After that the Khadku Singh’s paid their tributes to this great warrior.