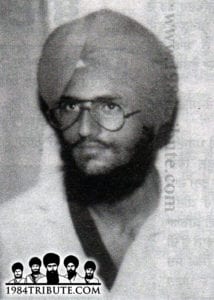 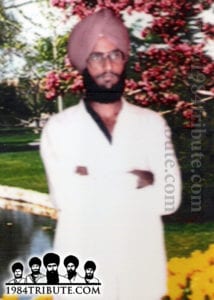 Bhai Balwan Singh Dheriwal was born on 21st June 1971, in the house of Jathedar Harbhajan Singh and from the womb of Mata Baljit Kaur in the village of Dheriwal, district Amritsar. Bhai Sahib’s family has played a great part in the Sikh history. Bhai Sahib’s great grandfather, Hawaldar Jawand Singh was the first singh from the village of Dheriwal to take amrit from the Panj Pyare and the family have been called ‘Kach Wale’ ever since. Hawaldar Jawand Singh was the sarpanch of the village for almost 20 years and after became a member of the District Board.

Bhai Sahib’s grandfather, Jathedar Bahadur Singh left his well-paid government job to do sewa for the panth via Akali Dal. Jathedar Bahadur Singh was very close to Sant Fateh Singh Ji, he had been to jail five times while doing sewa for the Punjabi Subha movement. Another member of Bhai Sahib’s family is his Chacha, Shaheed Bhai Baghel Singh, who was the general secretary of Khalistan Commando Force. Bhai Baghel Singh was sent to Jamshedpur in the Jharkhand state with Bhai Balkar Singh Jabhowal to do an action, but a local informant had both singhs arrested. The report of this arrest was sent to the Punjab police and on 14th January 1992, both singhs were taken to Punjab. After immense torture both singhs were made shaheed in a fake encounter on 19th January 1992. Also on 2nd October 1990, Punjab police had shot dead the 21 year old, Bhai Jagdev Singh in Company Baagh, Amritsar. Bhai Jagdev Singh was the son of Bhai Sahib’s eldest Bhua Ji. Another family member, Bhai Rashpal Singh was 22 had been arrested from home and killed in a fake encounter as well.

Almost every member in Bhai Sahib’s family, including the women were arrested and tortured by the Indian security forces. Even then the Punjab police were not happy, they sent a black cat to try and arrest and finish of Jathedar Harbhajan Singh, but the family received this information and 2 minutes before the black cat came to the house, Jathedar Harbhajan Singh left their homes and farms along with rest of the family.

Bhai Sahib had just passed his metric, when the attack on Sri Harimandir Sahib by the Indian army ignited mountains of fire within Bhai Sahib. Bhai Sahib and Bhai Jagdev Singh went to Sri Harimandir Sahib to do darshan. Both singhs looked at the destruction of Sri Akaal Takht Sahib caused by the Indian tanks and cannons. It was here when Bhai Sahib and Bhai Jagdev Singh stood before the Sri Akaal Takht Sahib and did ardas to take revenge for this attack on the Sikh panth which killed many innocent Sikhs all over India. Now both singhs had made their minds up on doing sewa within the Sikh Freedom Movement. The family only found out about Bhai Sahib’s involvement in the Sikh Freedom Movement when Bhai Sahib started doing actions with other Khadku Singhs.

One day father, Jathedar Harbhajan Singh and Chacha, Bhai Baghel Singh Dheriwal sat down with Bhai Sahib and Bhai Jagdev Singh and tried to make them change their minds and stay at home. But Bhai Sahib’s answer was, “I cannot go against your will, as you are my elders. But can you answer my question? I and Jagdev have done Ardas in front of Sri Akaal Takht Sahib to punish the enemies of the Sikh panth, should we now go against that Ardas?” upon hearing this Bhai Baghel Singh answered, “Okay, we will not stop you. But make sure you don’t use these weapons to scare the poor and the weak. Also don’t take money from no one for the sewa you do.” After making Bhai Sahib aware of these points, Bhai Baghel Singh left.

An officer shouted at the singhs to surrender via loudspeaker and if they don’t then they will blow the singhs into pieces. Bhai Sahib answered, “We are not here to surrender, you should do what you have come here to do or go back empty handed.” In this great battle of Khalistan 7 Khadku Singhs attained shaheedi, including Bhai Sahib himself, Bhai Prem Singh Tariska and Bhai Jang Singh Jabhowal. These singhs joined the endless list of Guru Gobind Singh Ji’s shaheeds. The bodies of the shaheed singhs were not given to their families. Out of all the singhs only Baba Balkar Singh managed to survive and escape, to whom Bhai Sahib had given a message for his family. The message was, “Tell my family not to run after the Indian government and their dogs (Indian security forces) to get my shaheedi saroop.” The whole Sikh panth salutes the sewa and the bravery of Shaheed Bhai Balwan Singh. The word Balwan means a strong person and Bhai Sahib surely lived up to his name. 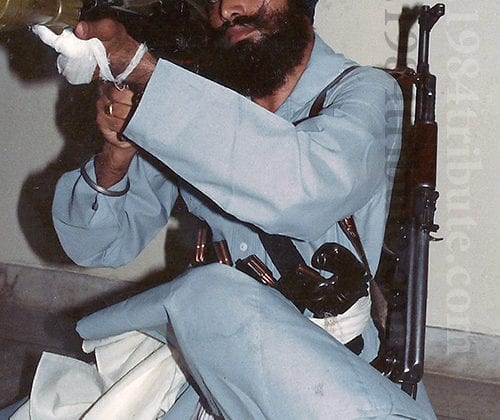