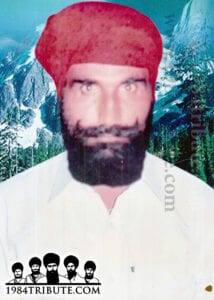 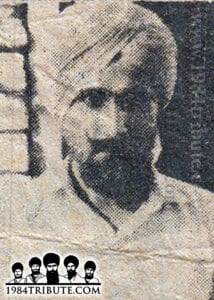 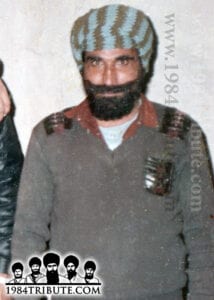 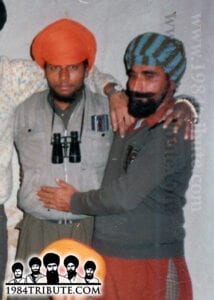 Bhai Bachittar Singh Chitta alias Baba was born in year 1955, in the house of Sardar Dyal Singh and from the womb of Mata Gurdeep Kaur in the Mahna Mallian village, near Sursingh, district Tarn Taran. Bhai Chitta was the 6th eldest out of Sardar Dyal Singh’s 7 children, eldest being Bhai Swaran Singh, Bhai Gurmej Singh, Bibi Swaran Kaur, Bhai Baldev Singh, Bhai Charan Singh, Bhai Chitta himself and the youngest being Bhai Sukhwinder Singh. Sardar Dyal Singh was a farmer, who farming bought provided all the essentials that his family could ask for. Bhai Chitta studied up to 7th class at the government school of a nearby village, Buchar. From his childhood, Bhai Chitta was really attached to Sikhi and always refer to Sikh history. Bhai Chitta would daily go to the Gurdwara Sahib of Mahna Mallian and do his daily prayers (Nitnem), he also would make sure that his food is only prepared by himself daily. After finishing his 7th class, Bhai Chitta started helping his family in their farms.

Bhai Chitta was happy and content in farming, the Sikh struggle was at its peak during this time. Bhai Chitta knew of the injustices upon the Sikhs of India, but felt tied to the responsibilities of family and home. One of Bhai Chitta’s nephews, Bhai Satnam Singh was on the run from Punjab police, as many Sikh youth of Sursingh were during this time. To find Bhai Satnam Singh, the Punjab police would regularly raid the house of Bhai Chitta which resulted in him being arrested and tortured at the local police station.

Bhai Chitta had enough of the ill treatment by the Indian security forces, he had always heard of storied where Punjab police targeted Amritdhari Sikhs, especially Sikh males, but now he had experienced this harassment himself, Bhai Chitta decided to leave him and fight till he can live a life in peace with his loved ones, or attain martyrdom trying to achieve freedom. It was in year 1989. Bhai Chitta finally stood up against the harassment of the Punjab police and decided to leave home and join Jhujaru Singhs of the Sikh struggle. Luckily for Bhai Chitta, he was assisted on his Jhujaru journey by his childhood friend, Bhai Jassa Singh Ghuk who was fighting the enemy on the frontline under the command of Khalistan Commando Force. While Bhai Chitta was doing Jhujaru actions under the command of Bhai Jassa Singh Ghuk, Bhai Chitta got the nickname of ‘Baba’, for his calm and spiritual personality.

On the night of 22nd July 1990, Bhai Chitta along with Bhai Gurnam Singh Gamma (village Mahna Malian) were traveling towards Mahna Mallian from Baba Budha Sahib. Both Jhujaru Singhs were on a motorcycle when they saw Indian security force checkpoint at the border of Sohal and Thathi village. Approaching the checkpoint, both Jhujaru Singhs demounted the motorcycle and started firing at the CRPF soldiers. There was a ground rule of Jhujaru Singhs in the Majha area, that no CRPF or BSF checkpoints could be allowed to set up in this area, following this, most of police station attacks that happened were in Punjab’s Majha area. Bhai Chitta and Bhai Gamma caused heavy damage of life and resources to the Indian security forces. In the end, both Jhujaru brothers attained martyrdom fighting the enemy head on. The CRPF saw only 2 martyred Jhujaru Singh, they were extremely surprised that only 2 Jhujaru Singhs would open firing and start a battle with hundreds of well-armed Indian security checkpoint and more surprising was that these 2 Jhujaru Singhs managed to cause so much damage. The bodies of Shaheed Bhai Bachittar Sigh Chitta alias Baba and Shaheed Bhai Gurnam Singh Gamma were given to their families and their final Ardas were performed at the Gurdwara Sahib of Mahna Mallian. 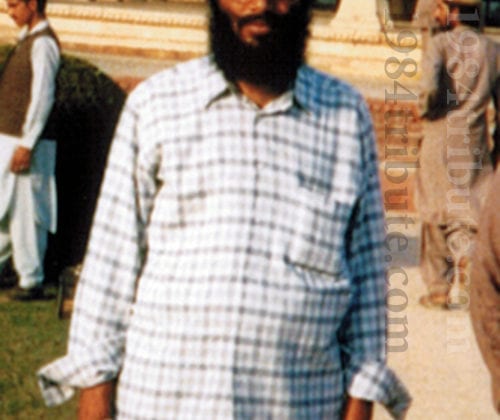