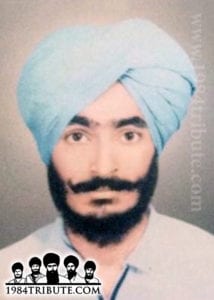 Sant Jarnail Singh Ji Khalsa Bhindranwale started the Sikh struggle for freedom and in this struggle uncountable number of Sikhs took part and gave their lives for freedom amongst such warriors is Bhai Paramjit Singh Pamma alias Baba Karam Singh who gave his life for Khalistan and wrote his name in golden ink amongst other great martyrs of Khalistan on the pages of Sikh history.

Bhai Sahib was born on 4th November 1962 in the house of Subedar Najar Singh and from the womb of Mata Jasbir Kaur in the village of Budha Kot district Gurdaspur, this village was the residence of Bhai Sahib’s mother’s family. Bhai Sahib originally from Kot Senia which later turned into army barracks and the family moved to Hoshiarpur’s Purana Bhangala village. Bhai Sahib had done his primary education in a local government school of Kotli Senia, then Bhai Sahib studied uptil 8th class in the village of Sidhwan and then took admission in the high school of Jandwal. Bhai Sahib passed his 10th class with high scores and after, in 1981 Bhai Sahib passed higher secondary. Bhai Sahib then joined DAV College in Dasuha.

In 1982 Bhai Sahib came in contact with Singhs of the All Indian Sikh Student Federation and in 1983 Bhai Sahib became the president of DAV College. Now as well as studying Bhai Sahib joined the NCC and passed the ambulance association examination for treating wounded people, Bhai Sahib achieved a certificate from his examination. After passing his BA Honours degree, Bhai Sahib enrolled himself in Hoshiarpur’s MA economics college. Bhai Sahib had regularly gone to Sri Harimandir Sahib and listened to speeches of Sant Jarnail Singh Ji Khalsa Bhindranwale in person. Sant Ji also tied a turban on him because he knew that this Singh will do great sewa. When the Government of Indian attacked Sri Harimandir Sahib in June 1984 and then in November 1984 the massacre of innocent Sikhs in Delhi and rest of India, many Sikhs were left in dismay and wanted justice. How could the Sikhs ask for justice from the same government who committed the injustices in the first place? Bhai Kashmir Singh of Chhamian Hoshiarpur who studied with Bhai Sahib was arrested with a scooter and a revolver, during his interrogation he named Bhai Sahib as one of his companions and the Punjab Police now came to the college to arrest Bhai Sahib, but Bhai Sahib had escaped well before the police got to the college. Then the police labelled Bhai Sahib as a criminal on the run, the Punjab Police started to harass Bhai Sahib’s parents and younger brother, Bhai Charanjit Singh. They would get arrested and at times taken to various police stations or interrogation centres of Hoshiarpur. The police had looted all the expensive furniture from Bhai Sahib’s house. The Punjab Police were not satisfied so they started arresting Bhai Sahib’s other relatives too.

During this time Bhai Sahib met Master Sukhwinder Singh Dabbanwal who was linked to Babbar Khalsa. Soon Bhai Sahib also joined Babbar Khalsa and became an active Jhujaru Singh. For some time Bhai Sahib was doing sewa of Sri Darbar Sahib, for example the reconstruction of Sri Akaal Takht Sahib and washing the Parikarma with the holy water from the Sarovar. Bhai Sahib also did the sewa of taking Langar from the Langar hall to Pingalwara’s Bhagat Puran Singh Ji. Within the Sri Darbar Sahib complex Bhai Sahib was known as Baba Karam Singh. Bhai Sahib had played an important role in the Ludhiana back robbery.

According to the press release of police officer, Suresh Arora, Bhai Sahib was wanted for many cases for example:

On 21st March 1986, Punjab Police arrested Bhai Sahib from Hoshiarpur due to an informant. The police decided to make Bhai Sahib Shaheed in a fake encounter, near a roundabout in Mehalpur. 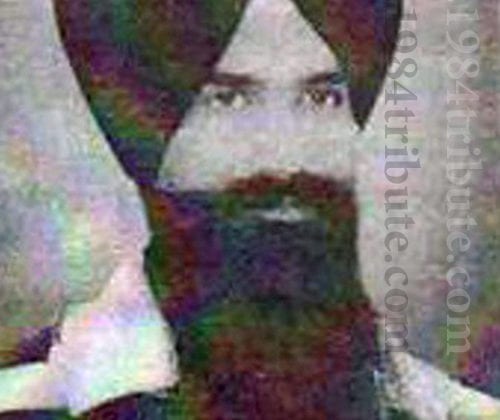