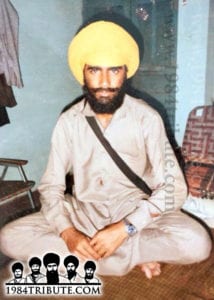 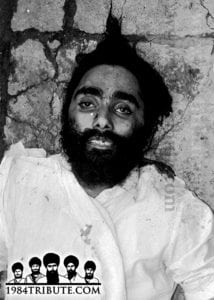 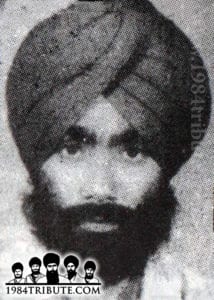 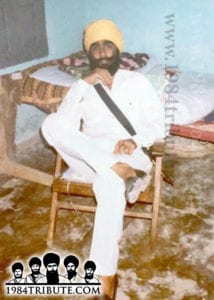 It is said that the land of Punjab, is the land of warriors, but when we look into the Sikh history, it comes to light that the land of Rajasthan also has its fair share of Sikh warriors. The people of Punjab and Rajasthan are hard workers, honest and full of self-respect. May it be the 18thcentury or the 20thcentury, Rajasthan has always made some of the great warriors that have played an important part in the Sikh Freedom Movement.

Bhai Gurjant Singh Rajasthani was born in the house of Sardar Gurdev Singh and from the womb of Mata Gurdev Kaur in the year of 1965 in 66RB near Rai Singh Nagar, district Ganga Nagar of Rajasthan state. Bhai Sahib was the eldest of his brothers and sisters. Bhai Sahib had 3 sisters Bibi Dishprinder Kaur, Bibi Kulwinder Kaur, Bibi Baljit Kaur and a younger brother, Bhai Harwinder Singh.

After escaping from police custody, the first meeting Bhai Sahib had with the Rajasthani police was on 24thAugust 1987 near Rai Singh Nagar, in a historical gurudwara Budha Joharh Gurudwara. A lot of Sikh sangat had gathered at the Gurudwara, Bhai Sahib and fellow singhs were attending this event at the gurudwara. The police were also at this event looking for Bhai Sahib. The police recongnised Bhai Sahib and surrounded the whole event and asked Bhai Sahib to put his hands up. Bhai Sahib put his hands up and then the police used their wooden batons to disperse the sangat. As the police moved towards Bhai Sahib, the fellow singhs of Bhai Sahib who were mixed into the sangat fired bullets towards the police. In the firing three police officers were killed and many wounded. When the singhs fired at the police, the police officers started running for their lives. Bhai Sahib and fellow singhs were successful in escaping safely. Following is the article taken from Ajit newspaper of 24thAugust 1987:

Jaipur – 24thAugust 1987, today in Rajasthan, Khadku Singhs carried out a big action in which 2 police officers along with another 3 men were killed and 2 more were wounded when the Khadku Singhs blindly fired bullets into the crowd. The action happened in district Ganga Nagar at the Sikh historical Gurudwara Budha Joharh. A police officer, Jagdish Singh hid and managed to escape. The names of the police officer that were killed are Hawaldar Dalip Singh, Constable Asu Singh and a truck driver, Mogan Singh. Khadku Singh were a group of 4 and fled the scene in a blue jeep. The police team were deployed as security at the religious event. At the time when this action happened, the police officers were drinking sweet water. The Khadku Singhs thought that the police was looking for them. The 4 Khadku Singh from which 2 were in turbans and another 2 were haircut, started blindly firing bullets at the police. Before firing the bullets, the Khadku Singhs shouted, “Anyone who harasses the Sikhs in Rajasthan, better take this as a warning and stop their harassment or else I will start harassing them.” The Khadku Singhs have also left a letter at the scene of action, in which the Rajasthan government is told not to harass the Sikhs of Rajasthan. The state minister said that the DIG and CID have been sent to the scene.

In 1987, Bhai Sahib came home and said that he is going to take his wife and son away with him, but rest of the family was against this decision said, “You yourself are wanted by the police, tell us why are you going to drag you family with you?” But Bhai Sahib did not listen to no one and took his wife and son with him. After this Bhai Sahib never came back home and nor did the family know where Bhai Sahib was living with his family.

To fulfil the need of weapons for Sikh Freedom Movement, Bhai Sahib, Bhai Subeg Singh Lubhania Wali and fellow singhs decided to loot a bank and started making a scheme. On 19thApril 1989, Bhai Sahib and fellow singhs entered the State Bank of India branch in the city of Sadul, district Ganga Nagar. Even aft being warned, the bank manager triggered the alarm and the singhs could only leave with 73000 rupees. As the mission was interrupted, the singhs came in anger and shot dead the bank manager. In this action, another 10 men were killed. As the singhs were about to leave the bank in a van, the Indian security forces had surrounded them. When the Indian did not allow the singhs to escape, the singhs then fired bullets towards the forces, killing 10 men instantly. The forces quickly moved out of the way and the singhs crossed the border into Punjab. Later Bhai Sahib took the responsibility for this bank robbery on newspapers via Khalistan Commando Force (Rajasthani), as follows:

27thApril – Batala – Khalistan Commando Force has taken the responsibility for the bank robbery in the Sadul city of Ganga Nagar (Rajasthan) and killing 15 people and wounding over 50 people. Spokesman of Khalistan Commando Force, Bhai Kirpal Singh sent the press note, which takes the full responsibility for the bank robbery and the killings. In this press note the Chief General of Khalistan Commando Force, Bhai Gurjant Singh Rajasthani advises the people of Punjab that on 30thApril 1989, the people of Punjab must join the strike where all the roads of Punjab must remain clear, no cars or any other vehicles should be in the road on this day.

The list of actions done by singhs of Khalistan Commando Force under Bhai Sahib is very long and the list of shaheeds from Bhai Sahib’s group is also very long. Then on 1stSeptember 1991, the main headline on the Ajit Jalandhar newspaper is as follows: