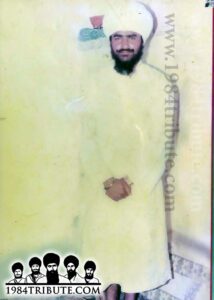 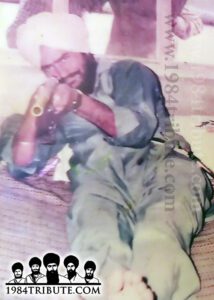 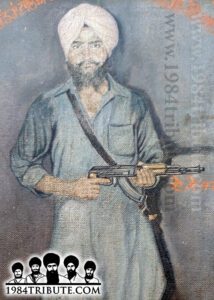 Shaheed Bhai Gurdev Singh Sattyawali was born in 1963 from the womb of mother Mata Sukhwinder Kaur and father Sardar Kirpal Singh in the village of Sattyawali. Bhai sahib was one of eight children. The family lived a happy and comfortable living through agriculture and farming their lands. Bhai Sahib had a very pleasant personality and carried traits of patience and contentment. Bhai Sahib went on to study his 10th class at Guru Nanak College in Ferozepur.

It was at this college that Bhai Sahib made acquaintance with the president of Sikh Student Federation Bhai Gurjit Singh Harihar Jhok. Bhai Sahib then took the decision to become a member of the Sikh Students Federation.

The Dharam Yudh Morcha was in full flow. Bhai Sahib had given voluntary arrest many times during the Dharam Yudh Morcha. He would visit Sri Harimandir Sahib Amritsar where he got the privilege of listening to Sant Jarnail Singh Ji Khalsa Bhindranwale’s sermons. This had a huge impact on Bhai Sahib and completely changed his mindset. Bhai Sahib realised how fake the governments of this world were with its corruption and materialistic values.

Bhai Sahib took a pledge to dedicate his life and serve the cause of Sikhi and its fight for freedom. He went back to join Bhai Gurjit Singh Harihar Jhok to fight alongside him in the armed struggle for Khalistan. Once the police got to know of this, they began to conduct regular raids to Bhai Sahib’s home. To avoid arrest Bhai Sahib left his family home in 1983 and went to stay at Sri Darbar Sahib Amritsar. At the time, Bhai Gurjit Singh was the designated armed bodyguard for Sant Jarnail Singh Ji Khalsa Bhindranwale.

Between Bhai Gurdev Singh Sattyawali, Bhai Gurjit Singh Harihar Jhok, Bhai Manbir Singh Chaheru and General Labh Singh Panjwar, they collectively had a stronghold of the entire Majha area from Amritsar to Gurdaspur. Ten days prior to the battle of Amritsar in June 1984, Sant Jarnail Singh Ji Khalsa Bhindranwale sent Bhai Gurdev Singh on other duties outside of Amritsar. Upon his return he was to find out that Sant Jarnail Singh Ji Khalsa Bhindranwale, Bhai Amrik Singh Khalsa, General Subeg Singh, Baba Thara Singh, Bhai Ram Singh, Bibi Upkar Kaur and Bhai Joginder Singh amongst many others had all attained martyrdom. The Indian government raged so much desecration and killed many innocent Sikhs, including small babies. They spared no one. Mass killings and arrests were made by the Indian government.

Early in 1986, Bhai Gurjit Singh Harihar Jhok returned to Punjab and joined Bhai Sahib in coordinating forces and gaining a hold on a large scale. The Khalistan Commando Force was established. Bhai Sahib spearheaded many missions under the command of General Labh Singh Panjwar. Bhai Sahib was instrumental in the largest bank robbery in the northern state of India, the Punjab National Bank in Ludhiana. Other missions included the elimination of the most senior leader of the Punjab police, control of the paramilitary hold over Amritsar and Malwa region. Bhai Sahib was always given the lead responsibilities.

Bhai Sahib was married in April 1987 to Bibi Nirvair Kaur, who was a nurse by profession. A baby boy blessed their home eight months after Bhai Sahib’s martyrdom, named Shamsher Singh.

Where there was discourse or a place to share one’s encouragement on faith and religion, Bhai Sahib always shared and exchanged knowledge on Sikhi. He would encourage the youth to learn and practice their faith. On the same level, Bhai Sahib raised awareness on the cause and the freedom movement. He clearly informed people of the injustices faced and how we were put into a controlled slavery by the Indian government.

Bhai Sahib was a keen community servant. He would help households who were suffering from drug addicts or families greedy for dowry and husbands sat at home idle. Bhai Sahib would encourage them towards Sikhi and to join the cause for a better purpose. Bhai Sahib fulfilled his selfless contribution in honouring the pledge made by all Sikh Militia forces in 1987 to take initiatives in bettering the current state of the society along with the continuous armed struggle for freedom.

Bhai Sahib was made responsible to buy vehicles for transporting arms and weaponry. On one occasion, Bhai Sahib bought a truck and modified the inner flooring to create an additional eleven inch raised flooring above the existing flooring. This extra compartment space would allow for hiding all the arms and weaponry. This way the driver would be able to pass police check points without being detected.

On 13th June 1987, Bhai Sahib was enroute to make a delivery of arms. Whilst driving past a village named Mehron, the truck got stuck in a wet mud pit. Bhai Sahib made many attempts to relieve the truck from the mud but the truck was not willing to budge. The locals also gathered to help but were unsuccessful. Ironically the police turned up, it was obvious one of the locals had made a tip-off. With the pretence of helping Bhai Sahib get the truck out, the police surrounded the area very quickly. Upon realising, Bhai Sahib quickly grabbed his gun and started to exchange fire. Bhai Sahib managed to eliminate many police personnel. He fought till his last breath and attained martyrdom in that battle.

Approximately four days later, a meeting was held by Bhai Gurjit Singh in Ludhiana. The location was a house close to the Guru Nanak Engineering College rented by some students. Bhai Gurjit Singh was really upset and sad on that day. He had lost a loyal and trusted partner, his right arm. Bhai Gurjit Singh openly spoke about how Bhai Gurdev Singh did Sewa with the Singhs from the Khalistan Commando Force; General Labh Singh, Bhai Malkeet Singh Bapu, Bhai Rashpal Singh Fauji etc. Bhai Sahib’s sacrifice was honourable and special. His contribution was unmatched. The Sikh Nation will forever remember his dedication and contribution to the cause.

Bhai Sahib also had a hide out in the area of Nakodar, the village of Noorpur. He always had a wish to be married before his martyrdom, to fulfil his service for the cause and be ensure completeness in his connection and recital of Gurbani (sacred scriptures of the Sikhs). All his wishes were fulfilled. On a daily basis Bhai Sahib would be so connected to Gurbani, that he would continuously recite the scriptures and meditate on God’s Name whilst carrying out his day-to-day business.

Information given by the family of Shaheed Bhai Gurdev Singh Sattyawali 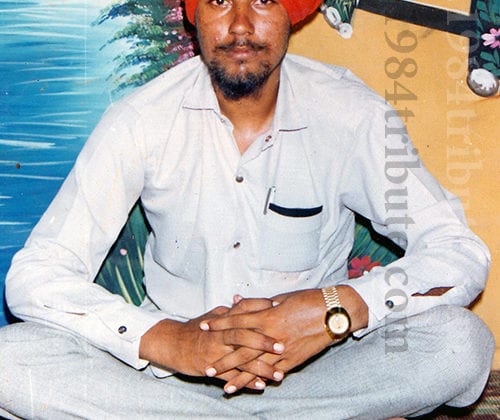 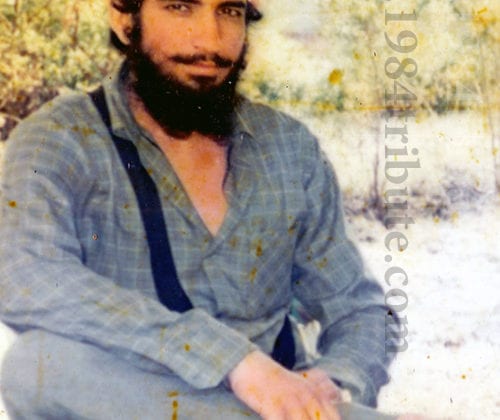