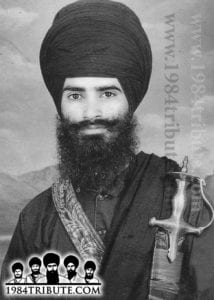 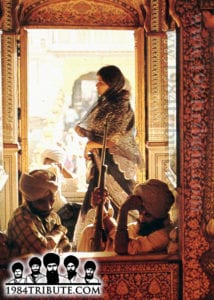 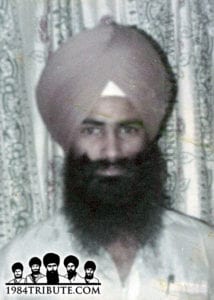 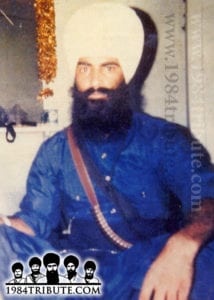 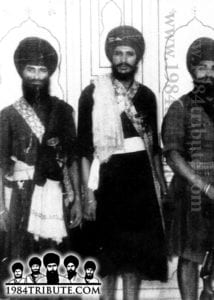 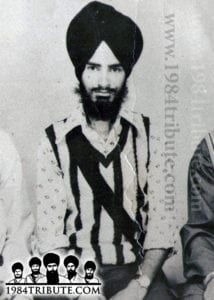 and Bhai Gurjant Singh ji Rajasthani. All Shaheeds are respectful, irrespective of which Jathebandi they belonged to, what actions they did and how they laid down their life. It’s not in hands of a Shaheed to choose form of death; it is pre-ordained destiny, karam of a Shaheed which takes him to the Eternal moment of Glory- Moment of Shaheedi.

This material world, its pleasures and tastes, joys and sorrows, the mansions and riches matter to them who are bound by the chains of Attachment and Vikaars. But those who have had Ras of Naam, experienced life beyond this mind and body, experienced Immortality, have broken the shackles of Moh and Maaya go beyond the reach of worldly desires and wishes. There mind is forever imbued in naam, self merged in Infinite Akaal Purakh. They live on this world as soldiers of God, fulfilling their duty assigned by Waheguru Akaal Purakh.

Bhai Anokh Singh ji was the one such great soul who was loved and blessed by Guru Parmeshwar and Singhs across all Jathebandis respected him and loved him. He worked as an Inspector in SGPC and here he came in Sangat of Bhai Fauja Singh ji and started attending Khalsa Farm of Bhai Sahib, where Simran sessions, Shastarvidya Abhyaas and Gurmat thoughts were carried out by Gursikhs. After Bhai Fauja Singh ji and 12 other Singh’s Shaheedi in 1978, Bhai Sahib along with other Gursikhs got together and took upon the sewa of punishing the enemies of Panth under leadership of Bhai Talwinder Singh ji Parmar, inspired by Sant Baba Jarnail Singh ji.

Bhai Sahib had great love for Singhs of Damdami Taksal and Sant Jarnail Singh ji Khalsa Bhindranwale. In fact, it was Bhai sahib only who had gone to Sant Ji in Akaal Takhat Sahib on night of 4th June 1984 to take arms and ammunitions for Babbar Singhs when ammunition of Babbar Singhs had finished on their Morchas at Gurudwara Baba Atal Rai. Sant Ji had said lovingly, “Anokh Singha, take as much ammunition you want, you all are my brothers, but still I wish you break the Ghera (cordon) and leave the complex. Panth needs you and your guidance after all this (Bluestar) ends’’.

Bhai Sahib said, “Sat bachan Sant Ji, we’ll fight till the last bullet, and if I survive till then, I’ll move out and carry on the mission you have entrusted upon us. Saying this Bhai Sahib left Akaal Takhat Sahib and left Darbar Sahib Complex on night of 5th June. Bhai Sahib was the last Babbar to leave Darbar Sahib Complex. Afterwards he was worked as ideologue of Babbar Khalsa and spiritual guide to hundreds of Babbar Singhs. He was the main Singh responsible along with Bhai Sukhdev Singh ji for removing the tag of Babbars being Jatha of Akhand Kirtani Singhs. During his sewa, he walked along with whole Panth, Singhs of all Jathebandis and backgrounds were welcomed in Babbar Khalsa, given they believed in Panthic Unity, Chardikala and struggle for freedom. He was very close to Bhai Sukhdev Singh ji Sakheera of Damdami Taksal as Bhai Sakheera’s sister was married to Bhai Anokh Singh Ji’s brother Bhai Santokh Singh, and had planned and carried out many actions jointly with Bhai Sakheera. Bhai Sukhdev Singh attained Shaheedi in May 1986.

Bhai Sahib Ji was arrested on 30th August 1987 from Vairowal in Amritsar. He was the biggest catch for Punjab Police till date from Babbar Khalsa. He was tortured badly but Bhai Sahib didn’t give up on Sikhi Sidak and well-being of his brothers who were fighting for Panth. His Shaheedi reminisces that of Bhai Sahib Bhai Mani Singh ji. Bhai Sahib’s thighs were cut open; salt was thrown on his wounds, his knees broken, his stomach pierced with hot iron rods, electric current was passed through wounds of his stomach and private parts of his body. After heavy torture when he didn’t give up, Amritsar police shifted him to Patiala. Most of the people don’t know, but it’s a fact that Bhai Anokh Singh ji was killed by Patiala police. A Singh who was part of movement told me this horrifying story. SSP of Patiala that time had ordered his Shaheedi to be video graphed.

(The Singh I met told me how Patiala police used to show his torture video to people arrested, after seeing which most of the people used to give up. But for those who had Guru’s mercy on them, the video worked in an opposite way. He told that Bhai Sahib didn’t cry, didn’t shout, didn’t say any word of helplessness, didn’t ask the butchers to leave him, instead as he was tortured, glow on his face increased, the blood on his body shined more, and his smile grew with name Waheguru. It served as an inspiration to others that if Bhai Sahib Ji can bear so much pain with smile and Waheguru on his lips, why can’t they? The singh and his father were both arrested and shown that video, which gave them power to endure pain and suffering on path of Guru, whereas week hearted gave up only after seeing initial stages of torture. Singh’s father was tortured heavily, whereas he himself had to face handicap and impotence after torture.)

The way Bhai Sahib was killed was the most brutal in present times. His fingers were cut tip by tip. His body was cut open, eyes gouged out but Bhai Sahib had just one word on his tongue, Waheguru. But this one word also irked the butcher Punjab police, so they cut off Bhai Sahib Ji’s tongue. They thought they had stopped his simran, ended his love for his Guru, but fools didn’t know that Brahmgiani Gursikhs don’t need Body to do Simran. Their Surat is attached to Shabad all the time, and Bhai Sahib Ji’s rom rom started saying Waheguru. At last after so much brutality, when Bhai Shaib ji didn’t give up and didn’t tell police any secrets of Mission, Babbar Khalsa or whereabouts of fellow brothers, police shot him dead. Bhai Sahib’s badly mutilated body was thrown in River Beas. They killed a person, but his Love, his memories, his sacrifice, his faith, his dedication still inspires and will inspire generations of Sikhs for centuries, who’ll always remember Bhai Sahib was an Anokha (unique) Martyr of Sikh Panth. Bhai sahib was loved by all and he’s still loved by all, irrespective of Jathebandis and Dals. His personality and jeevan was so great that all felt oneness with him.

This Panth needs Gurmukhs like Bhai Anokh Singh ji Babbar who had the ability to rise above groupism and sectarianism, unite their self with the mission Guru gave him and stayed committed and truthful to his Faith and beliefs. Whenever the Holy Blood of Gursikhs like Bhai sahib is spilled, Warriors are born who take the Holy sword in their hands and destroy the butchers of humanity and uproot evil empires.

Information given by the family of Shaheed Bhai Anokh Singh Babbar 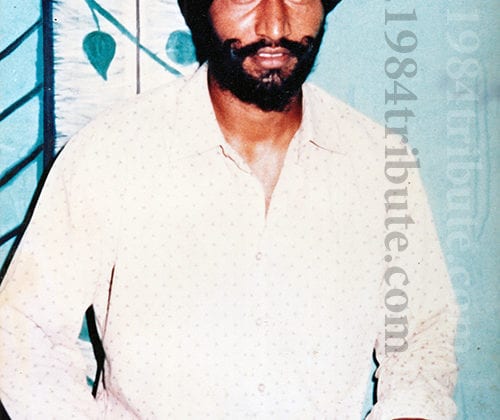