Home > Extras > Draft Of The Constitution Of Khalistan 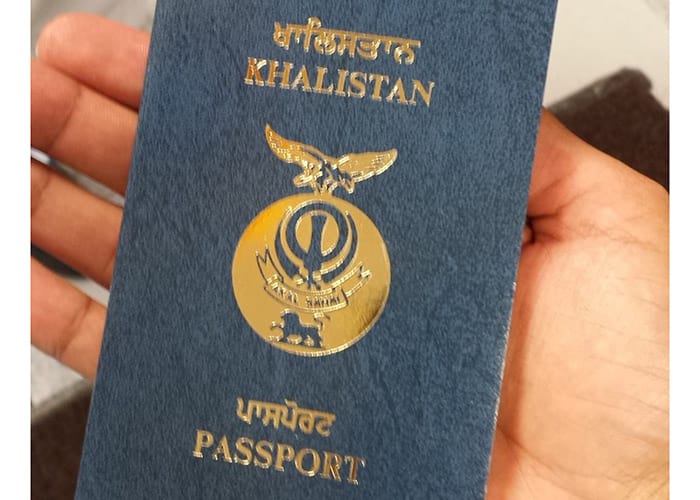 Victory Be In The Name Of One God

b.The Khalsa Panth is the extended Magnum Concillium or Grand Council of the Sikhs worldwide to which all baptized Sikhs (whatever their domicile) are eligible to belong.

e.The Khalsa Panth Cabinet will be the forum for all matters pertaining to the Sikh spiritual, social, economic and political cultures and the preservation of the Khalsa.

3a.The Khalistan National Cabinet will be the forum for all policy execution and government executive matters.

b.The Khalistan National Cabinet will be responsible to the Akal Takht.

c.All the Congressmen, Councillors, Cabinet members will be confirmed in Office by the Akal Takht.

4a.The Khalistan National Council will be the forum of discussion and debate and enactment of laws and will have the elected representatives of all the citizens of Khalistan of whom two thirds of the number will be members of the Khalsa Panth.

b.The Khalistan National Council will have nominated representatives of each minority citizen group by the Akal Takht.

c.All the representatives forming members of the National Council will be at liberty for the expression of their opinions and proposals and engage in debate and discussion in full freedom on any matter with the greatest emphasis upon the ideals of Khalistan.

d.The Khalistan National Council will have provision for the representatives of Specialist Interest groups and for individuals representing their personal viewpoints and proposals.

5a.Every citizen and the Specialist Interest groups will be encouraged to participate in the national policy formulation and the proposals of such Interest groups and the individuals will be thoroughly debated in the forum of the Khalistan National Congress which will be presided over by the Commissioner General appointed by the Governor General.

b.The range of activity by individuals and Interest groups will be confined to the forum of the National Congress and to the proposals for realizing objectives in the national, economic, environmental and social areas.

c.The Khalistan National Cabinet will be the forum for all policy execution and government executive matters.

d.The independent Khalsa Panth Cabinet College will be the forum for all matters pertaining to the Sikh spiritual and political cultures and to the preservation of the Khalsa. It will also be responsible to the Akal Takht.

7a.The Government instrument and all its strategy units will be guided in all its policies and deliberations by the spiritual and political philosophy and principles of the Khalsa Panth concerning the achievement of national goals and objectives and these will at no time be at variance with those of the Khalsa Panth in its commitment at all costs to uphold absolute Equality, Love, Justice, Human Rights, Civil Liberties, Equal Opportunities and Just Rewards.

b.There will be no political or socio-economic activity at variance with the ideals of the Khalsa Panth.

8a.The institution of National Council will have elected representatives of the citizens of Khalistan on proportional, regional, district and village basis.

9a.Every person resident or domiciled or born in Khalistan regardless of Race, Colour, Religion, Creed or Language will be entitled to the citizenship of Khalistan and the right to protection of the person by the government of Khalistan and its agencies and or agents.

b.Civil Service personnel of the systems and departments of the government instrument will be recruited from amongst the citizens of Khalistan including those holding dual nationality.

c.The government will be the instrument with overall responsibility for the implementation of policies and strategies, and this will be achieved by the Civil Service functioning under Khalsa political and strategy executives of the several Divisions and Departments.

d.The judiciary will not be “independent” in the sense that its decisions will reflect the Khalsa’s spiritual philosophy and cultures. At the highest level, every citizen will have recourse to the Akal Takht.

e.Non-Sikh religious organizations will be permitted for their spiritual and missionary activities but will not be permitted to participate in the instruments of government nor in a political capacity.

10a.The military at all times will be composed of majority of members of the Khalsa Panth.

b.The armed forces will operate under the joint command of Panj Pyare (at the Akal Takht) and the Governor General functioning collectively together as a single unit of responsibility.

11a.Full civil liberties and fundamental rights will be guaranteed to all citizens in equality regardless of race, colour, religion, creed or language.

b.Dual nationality for the Khalsa resident abroad with foreign nationality status will be optional.

c.Punjabi (Gurmukhl script) will be the first (compulsory) national language at par with English (also compulsory) as immediate second language. Urdu, Hindi, French and any other language of the minorities or groups will be offered as optional third language.

1a.Education will be compulsory. Emphasis will be laid upon liberal mass education. Leisure will be encouraged with facilities as co-operative institutions for educational leisure activities and the opportunity to separate work (which for the Sikhs is a form of worship) from private life.

b.Free education will be provided at all levels. All schools, colleges and universities will operate as co-operative institutions.

c.Free medical services at clinics, hospitals and related institutions will be provided at all levels and these will operate as co-operative institutions.

d.Free veterinary services will be provided at all levels for all animals and creatures and will operate as co-operative institutions.

2a.Social welfare services, education facilities and services, leisure facilities, essential services, veterinary services will all operate on advanced co-operative commercial patterns co-related in all areas to compulsory contributions interlinked with insurance schemes. In essence every citizen will be a share-holding member in every national co-operative institution of basic and essential services. The contributions of the citizens will be linked with insurance schemes covering every conceivable eventuality.

b.Whilst under the umbrella of the government instrument with its appointed representatives on the management Boards the national co-operative services will remain independent of and Unaffected by political strategy or policies and treated as essential economic development objectives and will be expected to function as reward seeking corporate bodies.

3a.Appreciation and preservation of environment and desire for better living standards with the national policy for every citizen to own his home and means of transport will be encouraged.

b.The reward to each citizen for services rendered will be co-related with the individual effort and input with the option for extra work input for yet higher financial reward and the satisfaction of the individual.

a.The economic system will be free enterprise and co-operative enterprise based on private or collectivist ownership in a free market and the development of corporate benefits and material wealth.

b.Monopolistic control by either private or collectivist interests will not be permitted.

c.The economy will typically be based on individual and/or collectivist entrepreneurial initiative but with centralized planning guidelines and objectives only and these mostly in the social welfare and related economic sectors.

d.All social and essential services with the participation of all the citizens will be based directly on the highest and most advanced technology and techniques, and management will be based on the most advanced economic considerations which, in the final analysis, will determine the procedures to be adopted within essentially co-operative corporations to engender profit and its distribution to the citizens the shareholders.

e.The reward for work in all spheres will be determined proportionally by formulae for each sector based on the standards of the First world countries, so as to enable the release of purchasing power through each working individual into the national economy mainstream and enable each individual to make compulsory contributions to the essential and basic national co-operative institutions and the national insurance schemes and additionally with the calculated surplus encourage industrial development and investment in the independent financial institutions and to take equity in industry geared for the production of all essential products and goods.

f.In addition to the agricultural sector, industrial production emphasis will be on housing, building materials, consumer goods and the provision of services.

g.The domestic market will be open to encourage maximum international integration by the creation of financial and commodity markets with minimal regulation.

h.Saving policies by working individuals will be compulsory and co-related to the graduated personal insurance cover schemes; the contribution to the national co-operative institutions a tax relief system.

i.Investment will be private and/or collectivist and unrestricted.

j.Mutual favourable and satisfactory international trade and training agreements and joint venture projects will be encouraged and established.

k.Economic growth rates will be encouraged to be adequately balanced for the needs of an efficient mixed agricultural and industrial society.

m.The agricultural sector will remain of top ranking priority and will be co-related to international market requirements and competition. Industrial development and manufacturing will be given the highest priority at par with the agricultural and communications sectors, and competition will be encouraged as a necessary stimulus for growth.

n.Labour representation will be encouraged but will be restricted to representation of issues of justice in all human spheres including financial. It will not be allowed to constitute itself as a union or as an economic force nor to threaten national or essential economic or social services and sectors.

o.Environmental awareness and preservation will be made the essential concern of every working citizen who will be required to contribute to the environment tax scheme.

2.Seek membership of the British Commonwealth.

4.Offer to contribute with manpower for service with the North Atlantic Treaty Organisation.

5.Endeavour to promote regional and continental development with a meaningful far sighted out-reaching economic order through an association of the Asian nations to also link up and participate with the European Economic Community for parallel objectives, standards and development patterns of society and systems thus to strengthen the Western “free” world and prevent the inroads of the unacceptable political and economic systems that continue to check and subvert the upliftment of the subhuman existence of the millions of peoples a circumstance that would, unchecked and unaltered, undermine the free world.

In this and naturally so within Khalistan would be the satisfaction for the Sikh nation in keeping with the divine command: the ideologue and raison de etre for Khalistan: to serve to fulfil Waheguru’s purpose for His Khalsa in His army to actively participate with and in the upliftment: service of mankind and His creation: and advancement of civilization. 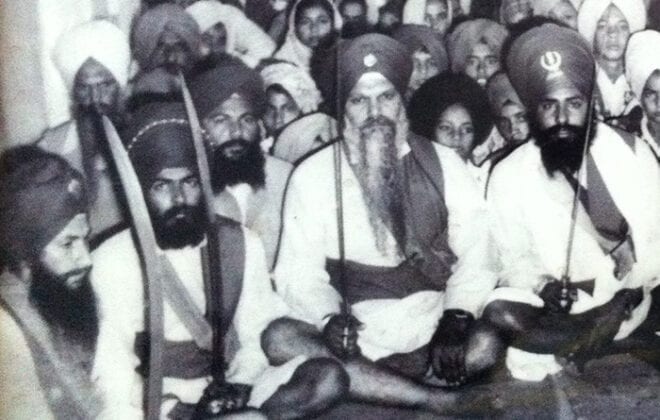 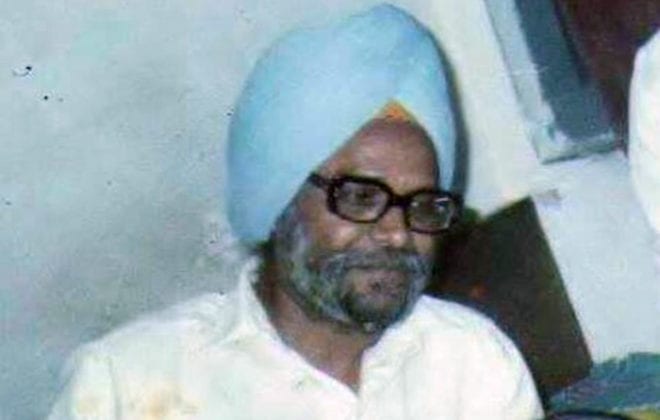