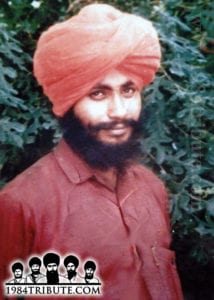 In the first armed struggle for Khalistan, many Sikhs took part and attained shaheedi fighting the Indian security forces. Most of these Sikhs did not get the chance to meet Sant Jarnail Singh Ji Bhindranwala, but the awareness Sant Ji had created remained as the free voice of the Sikhs after him. Bhai Shamsher Singh Bhai Rupa was also amongst the singhs who never met Sant Jarnail Singh Ji Bhindranwala but had listened to the cassettes of his.

Bhai Shamsher Singh was born in the house of Sardar Jagga Singh and from the womb of Mata Manjit Kaur in the village of Bhai Rupa, district Bathinda. Bhai Sahib was the eldest of 2 sisters, Bibi Kulwinder Kaur, Bibi Jaswinder Kaur and 1 brother Bhai Avtar Singh. Bhai Sahib passed his 10th class at a local school and after became a Homeguard in Dyalpura. For some time Bhai Sahib did duties as a gunman of Deputy Commissioner of Law Courts in Ful, Sukhdev Singh.

The person that has the warrior spirit in them can never accept the job of being a paid servant. These free souls do not like being a slave. People that walk with their heads high, can never be pushed under the knee of others. For these people freedom id life and slavery is death.