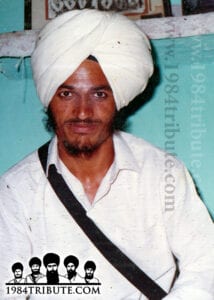 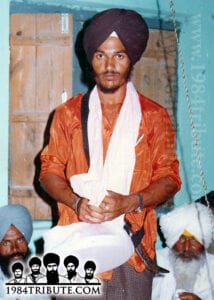 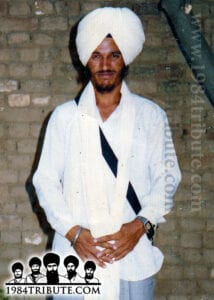 Bhai Ranjit Singh Rana was born in year 1970, in the house of Sardar Kunan Singh and from the womb of Mata Dalbir Kaur in the village Dhanna Cheema, near Qaddian. Bhai Sahib was the youngest sibling of 3 brothers and 1 sister, eldest being Bhai Tarsem Singh, Bibi Rupinder Kaur, Bhai Sakatar Singh. Bhai Sahib was born into a normal Sikh Punjabi family. Bhai Sahib studied up to 9th grade. Sardar Kunan Singh passed away when Bhai Sahib was at a young age of only 5years. After his schooling, Bhai Sahib went onto work at a warehouse in Ropar, which produced electrical spare parts. Following a short stint there, he moved onto working as an insurance consultant for a private BMI company in Qaddian.

During his time in Qaddian, Bhai Sahib came into contact with Jhujaru Singhs that had left the luxuries of the home and jumped into the battlefield to break the Indian chains of slavery that oppressed the Sikhs. Having formed a close acquaintance, Bhai Sahib began supporting the Jhujaru Singhs with responsibilities such as transporting weapons around Punjab, delivering messages in person and gathering intelligence of anti-Sikh elements. Soon Bhai Sahib came in the attention of the Punjab police, who began harassing Bhai Sahib and members of his family. Eventually, Bhai Sahib was arrested and imprisoned on charges of accomplice to the Jhujaru Singhs.

Following a year of imprisonment, Bhai Sahib was released and went back to leading a normal family life. His elder brother, Sardar Tarsem Singh encouraged Bhai Sahib to get married and on 3rd June 1990, Bhai Sahib married Bibi Balwinder Singh of Vadala Granthia village. They were blessed with a daughter who they named Bibi Harpreet Kaur. Bhai Sahib had started living a peaceful family life, when suddenly the Punjab police appeared at their doorstep and again began to harass Bhai Sahib and his family.

If there was any activity within the district, the police officers would unnecessarily arrest Bhai Sahib and interrogate him. This was not only happening to Bhai Sahib’s family, in fact Sikh families across Punjab were targeted in this genocidal campaign by Indian security forces to kill a generation of Sikh men. Frustrated with the continuous harassment and torture, Bhai Sahib decided to leave his house and family behind to join his Jhujaru brothers to fight for freedom, freedom in which Sikhi and Sikhs could flourish. Bhai Sahib joined the Jhujaru Singhs of Khalistan Liberation Army under the command of Bhai Avtar Singh Kathunangal. On 21st April 1991, Bhai Sahib was with Bhai Avtar Singh Kathunangal travelling to village Kala Afghana and were suddenly faced by a siege by the CRPF. Both Jhujaru brothers attained martyrdom during this confrontation. Their final Ardas were performed at their maternal villages.