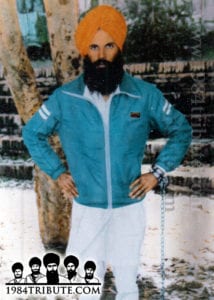 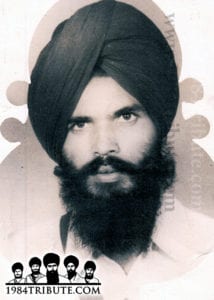 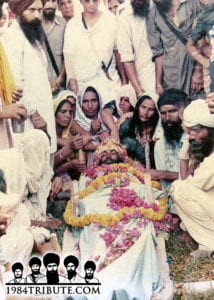 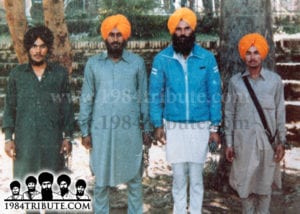 If someone attacks Sri Harimandir Sahib, Akaal Takht and kills innocent Sikhs, a Sikh will not sit down and just watch. Sikh youth that are still learning about life and thinking about having their own families have given up the caring of their elderly parents and their future, to fight against the cruel empire of India which kills minorities. The Sikhs have used the blessings of Waheguru and their weapons to punish enemies of the panth. Such Sikh warriors have made us realise that Sikhi is alive and kicking.

Within such Sikh warriors is Shaheed Baba Ranjit Singh Dyalgarh. Baba Ji was born in the house of Sardar Harbhajan Singh and Mata Gurdeep Kaur from Dyalgarh near Batala district Gurdaspur in 1959. Baba Ji had 4 brothers Bhai Sukhdev Singh, Bhai Surjit Singh, Bhai Kulwant Singh, Bhai Jagir Singh and 1 sister, Bibi Sukhwant Kaur. As Baba Ji’s father passed away, Baba Ji could not study but Waheguru had gifted Baba Ji with Knowledge and intelligence. Even though Baba Ji did not go school, Baba Ji could read and write. When Baba Ji spoke to educated people, Baba Ji would teach them a thing or two. Baba Ji could recite Gurbani from Sri Guru Granth Sahib Ji and was regularly heard reciting Chandi Di Var, Benti Choupai and other Sri Dasam Granth Gurbanis while walking. Baba Ji was always cheerful and seemed relaxed. Even during working at the farm with his brothers Baba Ji’s thinking was of a high level. Baba Ji always stood up for the rights of Sikh farmers, attended protests and even spent time in jail.

When Sant Jarnail Singh Ji Bindranwale gave his arrest in connection with the murder of Lala Jagat Narayan case on 20thSeptember 1981. Everything was going smoothly but Punjab police purposely didn’t like that and killed 24 innocent Sikhs by firing into the sangat. Baba Ji saw this with his own eyes and was shocked at seeing 24 Sikhs instantly killed for no reason at all. Baba Ji took amrit from Dam Dami Taksal and since start getting involved in the Sikh Freedom Movement. Baba Ji kept his village and surrounding villages up to date on what was happening at Dam Dami Taksal. After a lot of pressure from Sikh nation and especially singhs of Nagoke Jatha, the police released Sant Jarnail Singh Ji Bindranwale on 15thOctober 1981 from Ferozpur Jail. Baba Ji’s love for Sant Jarnail Singh Ji Bindranwale grew day by day. In 1983 Baba Ji was chosen as the senior of his village, and made vital decisions for the benefit of Dyalgarh. Once the butchers killed many cows and Baba Ji punished them served justice to the Hindus of Dyalgarh, by saving their goddess.

Up until 1984 Baba Ji stayed with Sant Jarnail Singh Ji Bindranwale, following the orders of Sant Jarnail Singh Ji Bindranwale, Baba Ji went home to Dyalgarh just before the Indian army attacked Sri Harimandir Sahib. The Indian Army attacked not just Sri Harimandir Sahib but also37 other gurudwaras and killing many innocent Sikhs, this left a deep impact on Baba Ji and wanting justice. Baba Ji met up with Bhai Swarn Singh Zaffarwal, Bhai Tarsem Singh Kohar, Bhai Jaswinder Singh Joga Bishnandi, Bhai Waryam Singh Khappian Wali, Bhai Makhan Singh Shithh, Bhai Gurmej Singh Dilwan, Bhai Harjinder Singh Kaka and formed Khalistan Armed Force. Which later joined 7 other freedom fighter groups and formed Khalistan Liberation Force. Khalistan Liberation Force was supported by many Khadku Singhs such as, Bhai Sukhdev Singh Sakheera, Bhai Durga Singh RFK, Giani Aroor Singh, Bhai Avtar Singh Bramha, Bhai Waryam Singh Khappian Wali and many more great Sikh warriors. The singhs were planning on punishing Judge Mirchian, for his cruel and unfair sentences to baptised Sikhs and bailing police officers who killed innocent Sikhs. Baba Ji stayed at the house of Bhai Waryam Singh Khappian Wali in the village of Khappian Wali. An informant of the police also lived in Khappian Wali and kept a not on everything that Bhai Waryam Singh Khappian Wali did, his name was Sarpanch Joginder Singh. On 24thJune 1985 Baba Ji, Bhai Waryam Singh Khappian Wali, Bhai Harjinder Singh Kaka and Bhai Jaswinder Singh Joga Bishnandi were travelling on a bus, Sarpanch Joginder Singh had informed the police off the location and that the singhs were planning to kill Judge Mirchian. The police arrested all 4 singhs as all singhs were unarmed. In court Sarpanch Joginder Singh was also a witness, the singhs were sentenced to prison and were sent to Amritsar Jail from which they were later transferred to Gurdaspur Jail where Bhai Swarn Singh Zaffarwal also locked up. After blind torture of the Punjab police the singhs did not give any information to the police.

Baba Ji had a reward on his head, the greed of this reward got to Baba Ji’s uncle ‘Chacha Bhajan’ and informed the police. On 24thJune 1986 the police surrounded Baba Ji in village of Kali Brahmni 5km away from Batala along with Bhai Makhan Singh Shithh and Bhai Gurmej Singh Dilwan President of Sikh Student Federation branch Gurdaspur. SSP Operation Sumed Saini‘s Punjab police, CRP and 12thBattalion of BSF officers had surrounded the singhs. On one side there was the Indian Government’s thousands of trained soldiers with all sort of weaponry and on the other side was 3 sons of Guru Gobind Singh Ji willing to take on ‘Sava Lakh’ soldier each till death. The well trained soldiers of India could not catch Baba Ji and all three singhs attained shaheedi fighting the security forces of the corrupt forces.

The local Sikhs got the dead bodies of the singhs, gave them shower, dressed them and cremated them according to gurmat maryada on 25thJune 1986. The shaheedi of Baba Ranjit Singh Dyalgarh did not stop the Khadku Singhs from fighting for Khalistan. The whole Sikh nation will remember the great sacrifice of these martyrs. 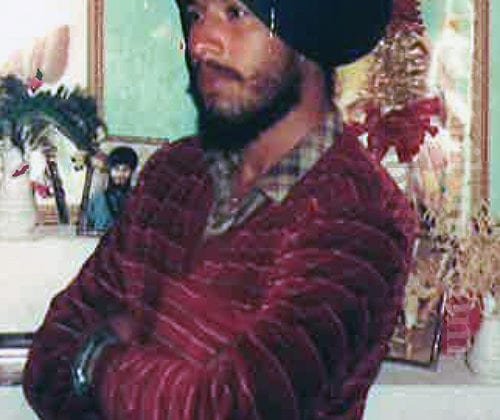 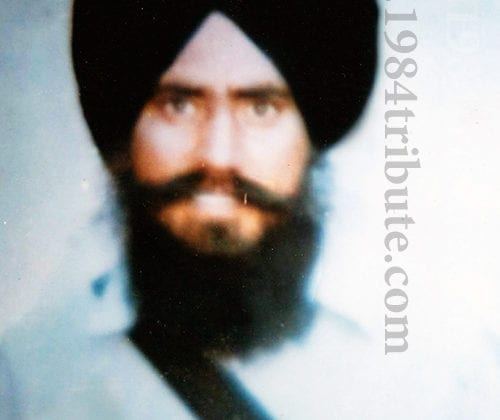