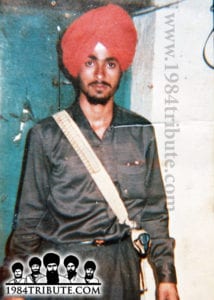 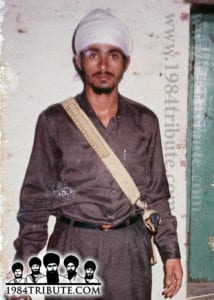 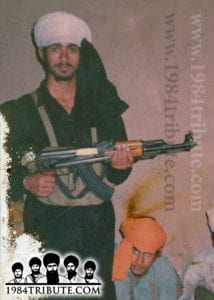 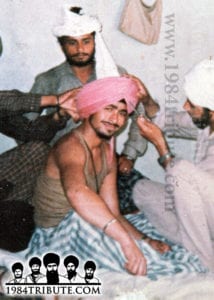 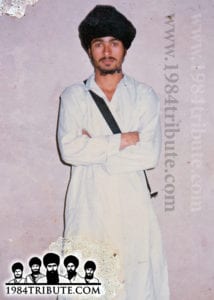 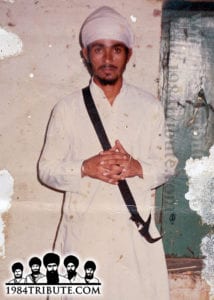 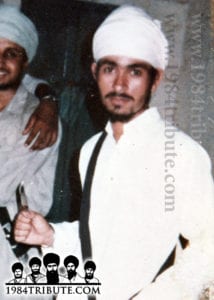 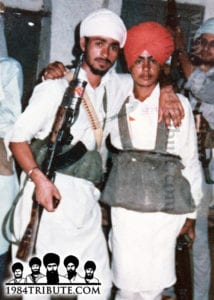 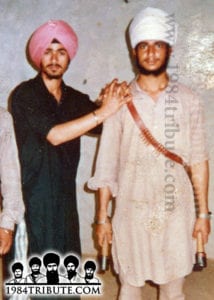 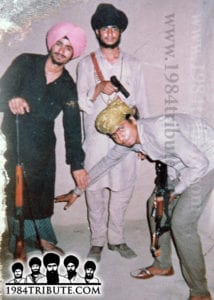 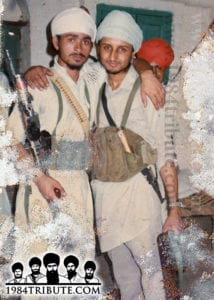 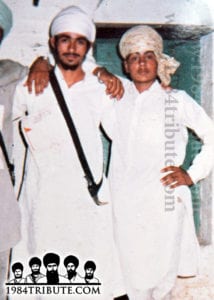 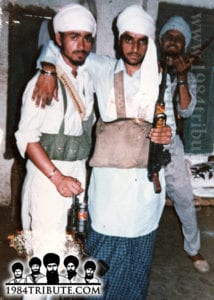 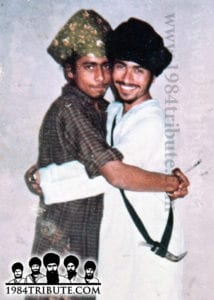 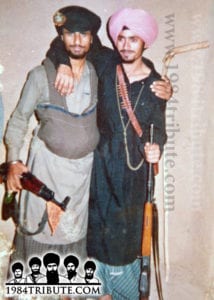 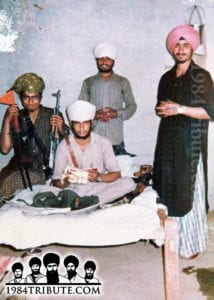 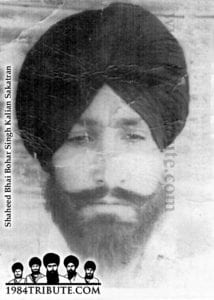 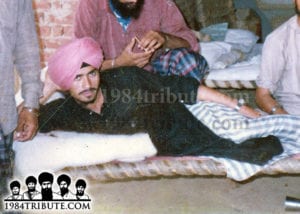 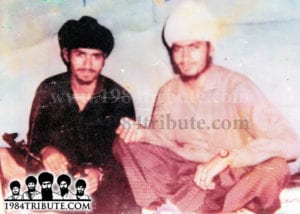 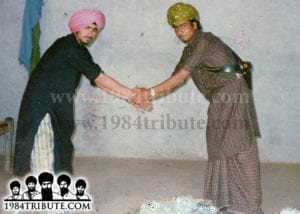 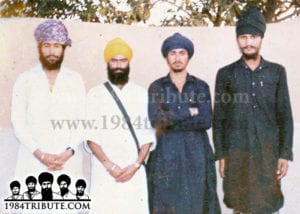 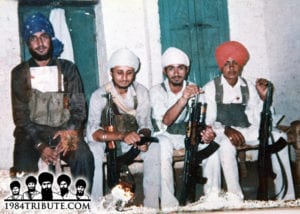 Government of India wanted to eliminate Sikhs who asked for freedom. After Sant Jarnail Singh Ji Bhindranwale was making the Sikh nation aware of the slavery, the Indian government carried out major assaults on the Sikh nation to kill the thought of freedom, for example in June 1984 the Indian army attacked Sri Harimandir Sahib and then in November 1984 the government had unleashed their Hindu yobs to kill as many Sikh men and rape as many Sikh women in the major cities of India. The Indian government had tried everything to finish the Sikhs of India, who asked for freedom off. The Sikh youth of Punjab were now awakened and gave a clear message to the Indian government, “You might have killed our beloved Sant Jarnail Singh Ji Bhindranwale physically, but now a Sant Jarnail Singh Ji Bhindranwale is born in every house.” One of the singhs who took the path of Sant Ji was Shaheed Bhai Pipal Singh Toofan.

Bhai Pipal Singh Toofan was born in the house of Sardar Gurcharan Singh and from the womb of Mata Joginder Kaur in the year of 1971 in the village of Kalian Sakatran, district Amritsar. Bhai Sahib had two brothers, Bhai Pargat Singh, Bhai Bohar Singh and three sisters Bibi Kashmir Kaur, Bibi Amarjit Kaur, Bibi Amrik Kaur. Bhai Sahib did not go to school and had helped the family in the farms and with the dairy business. Bhai Sahib was had a humble personality. Bhai Sahib would not talk to anyone with disrespect and also would not tolerate anyone talking to him in a disrespectful manner. Sardar Gurcharan Singh’s older brother’s son, Bhai Anar Singh was a Khadku Singh from Bhai Avtar Singh Bramha’s Khalistan Liberation Force group. When Bhai Sahib met Bhai Anar Singh, he also joined Khalistan Liberation Force and started doing actions. The Khemkaran police found out that Bhai Sahib has joined Bhai Anar Singh and become a Khadku Singh. The Thanedar of Khemkaran police arrested Mata Joginder Kaur and brother, Bhai Bohar Singh. Both family members of Bhai Sahib were tortured by the police and told to produce Bhai Sahib.

The locals tell us some of the actions Bhai Sahib was involved in:

Bhai Sahib had bought tornadoes of Khadku actions and for this reason Bhai Sahib was nicknamed the Toofan. At the time of Shaheedi Bhai Sahib had joined Babbar Khalsa and continued to do actions. On 16th April 1989, Bhai Sahib and a fellow singh, Bhai Sukhdev Singh Valtoha were staying at the house of pot makers in the village of Ahmedpur. When all of a sudden, the Punjab police and CRP surrounded the house singhs were staying. As the singhs tried to escape, Bhai Sukhdev Singh Valtoha attained shaheedi in the encounter. Bhai Sahib managed to get about 2 kilometres away from the Indian security forces near the bridge of Maniala and Mughal Chak but was caught up by the CRP officers. The CRP fired bullets in the direction of Bhai Sahib blindly, leaving clouds of smoke from the rifles. Bhai Sahib shot multiple times and attained shaheedi fighting the Indian security forces.

The SHO Khullar of Patti police station gave the body of Bhai Sahib to his family, after the pressure being put on him by the locals. The locals of Kalian Sakatran and Valtoha bathed the bodies and put new clothes on them. Both singhs were cremated in the Patti village under the eye of the Punjab police. Sri Akhand Paath Sahib was held at the gurudwara of Kalian Sakatran for the chardikala of Shaheed Bhai Pipal Singh Toofan and Shaheed Bhai Sukhdev Singh Valtoha. The ashes of both singhs were flown in the holy waters of Sri Govindwal Sahib.

Bhai Bohar Singh was married to Bibi Kuldeep Kaur. As his son was to be born soon, Bhai Bohar Singh had a dream in which Bhai Pipal Singh Toofan told him, “Jhujaru Singhs never die. I will come again and when I do I come name me Pipal Singh again.” In the house of Bhai Bohar Singh a son took birth, who was named Pipal Singh. Bhai Bohar Singh also had 2 daughters Bibi Harjit Kaur and Bibi Harpreet Kaur. The village of Kalian Sakatran had a police informer, who had fed the police with information on singhs and had the Khadku Singhs surrounded by Punjab police and CRP. Even when the singhs told this informer to change his ways, he did not stop. Then Bhai Pipal Singh Toofan punished this informer. The sons of this informer, attacked Bhai Bohar Singh after the shaheedi of Bhai Pipal Singh Toofan on 12th December 1996. The informer was getting the Indian security forces to kill the singhs of Sikh Freedom Movement and now his sons were killing the singhs themselves. The next generation of our enemy gets more evil from the last generation, we should move forward with our movement also as our generations pass. The widow of Bhai Bohar Singh and three children live together in the village of Kalian Sakatran. Sardar Gurcharan Singh and wife, Mata Joginder Kaur are unable to live their lives without the support of Bibi Kuldeep Kaur. Looking at this great sewa of Bibi Kuldeep Kaur, the Sikh nation bows to her with respect. 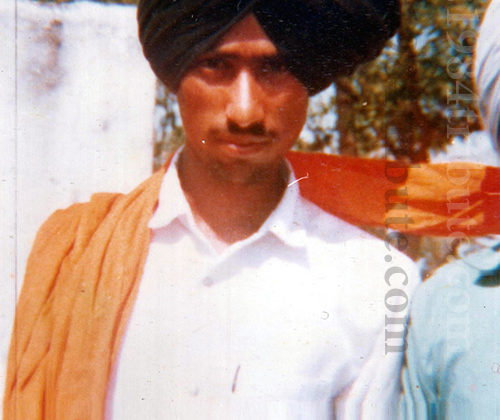 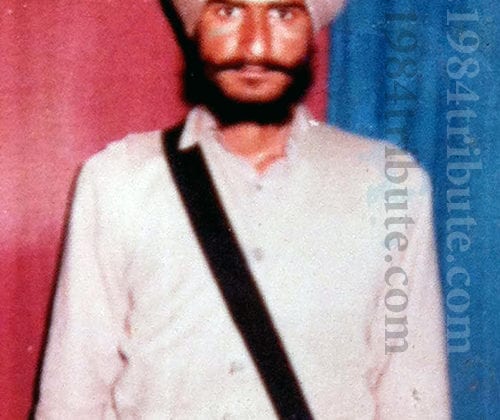