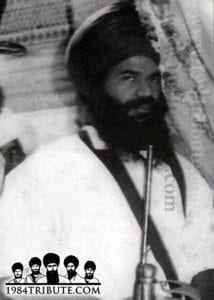 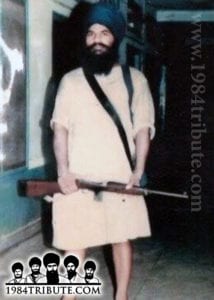 Bhai Mahinder Singh of Dam Dami Taksal was born in the house of Sardar Kartar Singh, an agriculture inspector and from the womb of Mata Mayawati Kaur in 1953, in the Balwinder Singh Nagar of Faridkot. Bhai Sahib were all together 5 brothers and sisters, Bhai Gurdev Singh, Bibi Pritam Kaur, Bibi Gurdeep Kaur and Bibi Surjeet Kaur. After passing 12th class at a local school, Bhai Sahib took admission into Baljindra College, Faridkot. Here Bhai Sahib passed his course to be a Giani and ITI courses. After finishing his studies, Bhai Sahib opened a furniture shop and started making an honest living. The family married Bhai Sahib to Bibi Mahinder Kaur from the village of Shamkhera. Living a normal family life, Bhai Sahibs saw the birth of his 5 children.  Their names are, Bhai Kuljeet Singh, Bhai Jaraljit Singh, Bibi Charanjit Kaur, Bibi Kiranjit Kaur and Bibi Dharamjit Kaur.

Time was taking its toll, Sant Jarnail Singh Ji Bhindranwale had started going village to village to do Sikh Parchar and hold Amrit Sanchars. Sant Ji also held a Diwan at Bhai Sahib’s village, in which Bhai Sahib and family attended. Bhai Sahib deeply concentrated on Sant Ji’s Katha and the echoes of Sat Sri Akaal were heard within the sangat. The way Sant Ji spoke the truth was amazing, it had woken up singhs that had been unaware of the injustices Sikhs faced in the so called free India. After the Diwan, Sant Ji had Panj Pyare prepare the Amrit for sangat, in which Bhai Sahib and family took Amrit and joined the Khalsa panth. some days later, Bhai Sahib met Sant Ji at the headquarters of Dam Dami Taksal at Chownk Mehta and from there on, Bhai Sahib started wearing the Bana and learning more Gurbani.

In a Jatha created by Sant Jarnail Singh Ji Bhindranwale to go village to village and hold Diwans, Amrit Sanchars, Bhai Sahib was also given the sewa within one of the Jathas. As well as fulfilling responsibilities at home, Bhai Sahib also did sewa for the panth by doing Gurmat Parchar. Soon Bhai Sahib was known as popular singhs of Dam Dami Taksal. It was in these days that the Narakhdharis hid behind the Indian government and killed 13 singhs including Bhai Fauja Singh and wounded over 150 Sikhs, who had turned out to peacefully protest against the disrespect of Guru Granth Sahib Ji by the Narakhdharis. Now the whole Sikh panth started a movement against the Narakhdharis and the racist Indian government.

Thanedar Gurbachan Sansi was known for his hatred against Sant Ji and his Jatha of singhs. When Sansi found out that Bhai Sahib had joined the Jatha of Sant Ji, he immediately added the name of Bhai Sahib to the list that all the black cats had given to them by the police. The informants and the black cats had started preparing traps to finish of Bhai Sahib. In the end, 27th May 1982 Bhai Sahib was arrested from Bikanair, but the police told the media that Bhai Sahib was arrested from the Fazilka Bridge. Now the brutal torture started on Bhai Sahib by the hands of Thanedar Sansi. Bhai Sahib was blindly interrogated to get names of the singhs involved in the Jatha, but Thanedar Sansi did not get what he wanted, he charged Bhai Sahib with possession of a Stengun and sent Bhai Sahib to Mukhatsar jail. Bhai Sahib spent a year in the jail. The singhs of Guru Gobind Singh Ji punished Thanedar Sansi later by assassinating him.

Some weeks before the attack on Sri Harimandir Sahib by the Indian army, Sant Jarnail Singh Ji Bhindranwale sent the families of the singhs home. Bhai Sahib’s singhni also went home, Bhai Sahib did Ardas to Sri Guru Granth Sahib Ji for the blessings of Shaheedi along with other singhs. This is how Bhai Sukhdeep Singh Barnala puts together the words of Sant Jarnail Singh Ji Bhindranwale:

From the 4th June to 6th June 1984, the singhs of Guru Gobind Singh Ji repeated history of Battle of Chamkaur, even the generals of the Indian army praised the tactics of the Singhs who were equipped with poor weaponry in Sri Harimandir Sahib. Many books have been printed, that give information on how a few hundred singhs with basic weapons took on one of the biggest armies of the world.

In this battle, Bhai Sahib who was usually called by his code name of Bhai Gajan Singh joined the panthic shaheeds between 5th June and 6th June. Before attaining shaheedi, Bhai Sahib wrote a letter to his wife from the battlefield. In this letter Bhai Sahib wrote how the government of India was losing the battle and in depth details of his role. Even after Bhai Sahib’s shaheedi the Punjab police did not stop harassing the family. 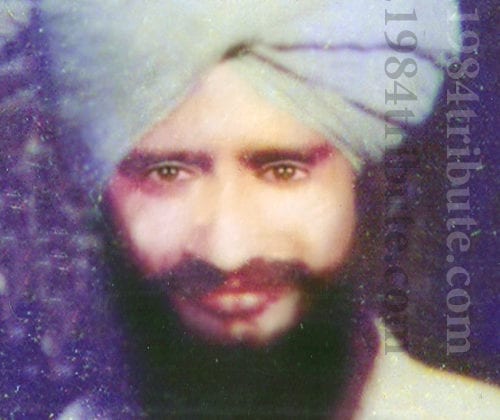