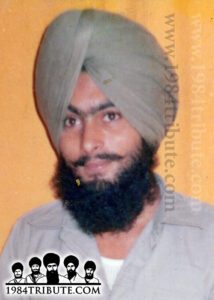 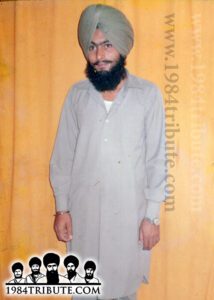 Bhai Joga Singh was born in the year 1964 on June 9th in the house of Sardar Jaswant Singh Patwari and from the womb of Mata Parkash Kaur, in the village of Naag Kalan, district Amritsar, which was his maternal home. Bhai Sahib was raised in this village and studied here up until fifth grade, after which he studied up to eighth grade at a school in Amritsar. Having completed study up to eighth grade, Bhai Sahib then reunited with his father at the paternal home of Fatehabad in 1982. Bhai Joga completed further studies up to tenth grade at the local village of Dhunda. Bhai Sahib then joined his father, in learning the agriculture profession and began cultivating their family-owned land. His father was the owner of up to 35 Acres of land. It was even more awe inspiring that Bhai Sahib would cultivate and farm these 35 acres all by himself.

It was June 1984 and the attack on Sri Harmandir Sahib by the Indian state that left Bhai Sahib distraught and he felt as though his heart had been ripped out of him. Bhai Sahib continued to live his daily life and routine. But the aftermath and the November 1984 Delhi genocide thousands of Sikhs left him even more torn apart and helpless. Bhai Sahib felt he had to do something and not just continue his daily life like nothing had happened.

Bhai Sahib decided to join the brave Jhujaru Singhs and sacrifice his life in whatever way possible in contributing to some sort of justice, a homeland of Sikhs in which as well as people of other faiths, Sikhs and Sikhi will also be safe. Bhai Sahib left his family home and joined the Sikh freedom movement. In 1986, Sardar Jaswant Singh Patwari passed away unexpectedly. Bhai Sahib was the elder sibling and the only male member of the household with two younger sisters. So, he was compelled to leave the movement and return home to take on the responsibility and sole breadwinner of the family. The CRPF, came to know of his return back home and because of his known involvement with the Jhujaru Singhs, they would often come to Bhai Sahib’s home to harass him and his family. Bhai Sahib was regularly picked up and taken to the interrogation centres where he endured such brutal torture by the police. The police would keep Bhai Sahib for days at a time, hidden and undisclosed until they released him.

In the year 1989, a local villager was murdered in Fatehabad. The police tried their utmost to falsely implicate Bhai Sahib as the perpetrator of this murder, but with the blessings of Sikh Gurus and the local Sikh community, the fabricated attempt failed. This just made Bhai Sahib even more determined to fight against these oppressive institutions. Bhai Sahib was no longer going to tolerate the inhumane treatment and humiliation, and once again decided to leave his family to re-join his Jhujaru brothers to fight for the greater cause.

Bhai Sahib’s contribution and input to the Sikh freedom movement was immense. Bhai Sahib was a brave and fearless warrior who took many risks during his Jhujaru actions, which he successfully completed. Bhai Sahib’s warfare was articulate and tactful. Due to his fearless and successful actions he was made the Brigadier General of the Khalistan Commando Force (KCF) and became famously known as ‘Bhai Joga Singh Fatehabad’. Bhai Sahib would always humbly obey any order given by the Khalistan Commando Force leadership and for this he was widely appreciated and loved by all.

Bhai Sahib then joined shoulder to shoulder with Bhai Paramjit Singh Panjwar, Chief General of KCF and executed many missions together.

Bhai Sahib’s character was a very noble one. When in need of money he would always go back to his family home, he never took money from the Sikh freedom movement. It was never in his nature to unnecessarily put fear, overpower or threaten anyone for the sake of money. Instead as part of Bhai Sahib’s selfless service (Sewa), he was known to serve justice and teach a lesson to local burglars and criminals who would torment and loot for money. Bhai Sahib kept his area safe and the locals appreciated him for this. He was a well-respected household name in the region and surrounding villages of Raiya.

Bhai Sahib had taken Amrit from the Panj Pyare when he joined the movement. He was always seen to be reciting Gurbani (Sikh prayers) during his spare time or continuously chanting Waheguru (gods’ name) whilst carrying out his daily activities. Bhai Sahib’s one prayer to Waheguru would always be ‘O Lord please don’t ever let an innocent be harmed in any action because of me’. This was his loving nature and did not want such a karma on his soul.

On 28th January 1990, a police informant disclosed the whereabouts of Bhai Sahib. Bhai Sahib had come to visit Bhai Amrik Singh Pehlwan at his home in Raiya. Soon as the Punjab police got to know that Bhai Sahib was at this residence, the immediately arrived to the location and Bhai Sahib was seen to be sitting on his own. As soon as the police saw Bhai Sahib, they mercilessly fired bullets at him and killed him on the spot, he had no time to react. Bhai Sahib attained Martyrdom.

Suspect killed in encounter: journalist from Raiya. Today in an encounter with the police near the cinema hall a suspect has been killed. It is said that a group of Jhujaru Singhs fired upon the police which escalated into an encounter. One suspect was killed and rest of the Jhujaru group fled the scene. At the scene the police found one 9mm pistol.

According to other reports, the suspect killed was Khalistan Commando Force’s Brigadier Bhai Joga Singh. His 2 companions were successful in their getaway. The districts senior police officer, A.K Sharma told us that the police team and the security forces encountered fire when they had raided a house on the outskirts of Raiya following a lead that we had received. The security forces were surrounded the house, when all of a sudden, the Jhujaru Singhs who were hiding in the house opened fire. In return fire from the security forces one suspect was killed. According to the police records, Bhai Joga Singh was amongst the leadership of Khalistan Commando Force and a close associate of Bhai Paramjit Singh Panjwar, also he was responsible for many killings in the Raiya and Fatehabad areas. In the house which the police raided, a Mauser pistol, one Stengun, 2 small rockets, 200 rounds of AK47 assault rifle and much more ammunition was found. Police also recovered the motorcycle that was used by Bhai Joga Singh. To find the suspects that fled the scene, the police teams are continuing the searches in the area.

Information given by the family of Shaheed Bhai Joga Singh Fatehabad 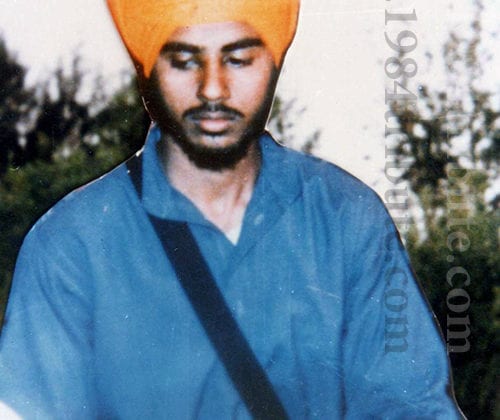