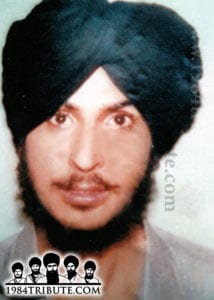 Victory or martyrdom were the only aims of the singhs that did sewa within the Sikh Freedom Movement, singhs such as Shaheed Bhai Jagdev Singh Jagga. Bhai Sahib was born in the year of 1972, in the house of Sardar Sarja Singh and from the womb of Mata Balwinder Kaur in the village of Hari-Noh, which is near Jeto. Bhai Sahib was the second youngest of the 8 children. Bhai Sahib completed his primary education at the local government school of the village and after Bhai Sahib started working with his family on the farms.

In 1984, the Indian government announced a storm of attacks on the Sikh panth. Even though Bhai Sahib was only 11 years old at the time, the injustice of the Indian government had a deep impact on Bhai Sahib. As the pain for the Sikh panth got stronger within Bhai Sahib, he found himself on an unsettled path. Now Bhai Sahib did not take much interest in the household responsibilities and the need to do sewa grew bigger. Bhai Sahib made contact with local Jhujaru Singhs of his area, but due to Bhai Sahib’s very young age, no one took Bhai Sahib to be serious. Even then Bhai Sahib continued to do sewa for the Jhujaru Singhs by serving them langar.

Sant Jarnail Singh Ji Bhindranwale once said, “If the Indian government ever attacked Sri Darbar Sahib, the singhs of Guru Gobind Singh Ji will declare the fight for the free land of the Sikhs, Khalistan. Following these words of Sant Jarnail Singh Ji Bhindranwale, the Jhujaru Singhs announced the Declaration of Khalistan on 29th April 1986 at the Sri Akaal Takht Sahib Ji. By now Bhai Sahib had understood the Sikh struggle which went back as 1947, this was due to Bhai Sahib being in the company of Jhujaru Singhs. Bhai Sahib slowly started taking part in actions with the Jhujaru Singhs.

After this Bhai Sahib didn’t feel right at home and always in dismay due to the injustices of the Indian government. Bhai Sahib use to say, “If that’s the case, then the police can pick us up whenever they want and kill us in a fake encounter.” Now Bhai Sahib left home permanently and went underground. Bhai Sahib started doing actions and never returned back home until he attained shaheedi.

In his Jhujaru life, Bhai Sahib did sewa under the Khalistan Liberation Force Jathebandi. Operating from one location was not what Bhai Sahib did. No matter from which area a Sikh enemy needed punishing, Bhai Sahib would travel to that area and carry out the mission. Where ever an evil police officer and informants that had Singhs killed, Bhai Sahib’s bullets would also reach there. Even though the police had upped their operations to capture Bhai Sahib, but this falcon of Guru Gobind Singh Ji fearlessly moved around the area and continued to punish the anti-Sikh elements.

A black cat had managed to find a way to infiltrate Bhai Sahib’s freedom fighting group. Like this a black cat had Bhai Sahib and Bhai Bhupinder Singh Muhianwala surrounded by the Indian security forces in the village of Mansoorwal, district Ferozpur. The encounter that started on the evening of 16th November 1992 had lasted all through the night into the early hours of 17th November 1992. At 7am both singhs were fighting against the Indian security forces and in the end attained shaheedi.

The Indian government may have used every dirty tactic to shut the free voice of the Sikh nation, but the sacrifices of the Sikh youth kept the struggle going. Whenever we seem to forget about the Sikh Freedom Movement, a sacrifice is made and another shaheed joins the endless list of the Sikh martyrs. Shaheed Singhs like Shaheed Bhai Jagdev Singh Jagga and singhs alike have told the enemies of the panth: 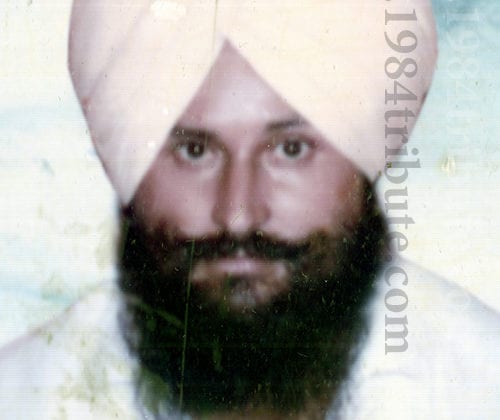