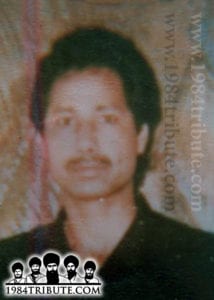 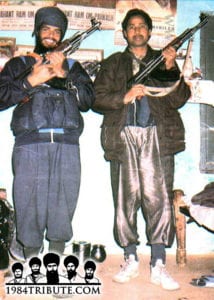 Bhai Sahib, Bhai Surinderjit Singh Matewal, Bhai Joginder Singh Kalair, Bhai Swaran Singh Bisrampur, Bhai Gurmej Singh Geja Bisrampur, Bhai Darshan Singh Usman Shaheed, Bhai Ranjit Singh Happy, Bhai Kulwinder Singh Pinky, Bhai Jasvir Singh Jassi and Bhai Balwinder Singh Bhinda alias Rambo were all involved in an action of Hoshiarpur’s village Harkhowal, in which 11 Indian security personnel died. Then later Bhai Sahib, Bhai Surinderjit Singh Matewal and fellow Jhujaru Singhs killed one of the Kalyugi Baba, who had started a cult and misguided people. Unfortunately one of the singhs from the team who killed the fake Baba was in fact an informant and had the singhs chased by the Punjab police and CRPF. Most of the singhs including Bhai Sahib, Bhai Swaran Singh Swarana managed to gain a lot of distance between them and the enemy, but two Jhujaru Singhs had to stop because their scooter had ran out of fuel. The two Jhujaru Singhs, Bhai Darshan Singh Usman Shaheed and Bhai Gurmej Singh Geja Bisrampur were surrounded on the bridge between Nogja and Dugri. After a 3 hour long battle with Indian security forces, the two singhs had ran out of ammunition and attained shaheedi. Within a week Bhai Sahib avenged the shaheedi of fellow Jhujaru Singhs by killing the informants of Cheema Kalan village.

Bhai Sahib hated informants and police officers that blindly tortured Jhujaru Singhs or harassed the families that supported the Jhujaru Singhs. Bhai Sahib together with Bhai Swaran Singh killed CID’s ASI Manjit Singh in the village of Jahura. ASI Manjit Singh who was stationed in Aadampur, district Jalandhar was known for arresting and killing many Jhujaru Singhs. Bhai Sahib also killed Hawaldar Harbhajan Singh in the village of Laroy, who was from Bhogpur police station. Than Bhai Sahib, Bhai Surinderjit Singh Matewal and Bhai Raghvir Singh Bira attacked a convoy of BJP in Phagwara, which was travelling to Jammu. In this action 7 BJP workers were killed.

On 21st June 1991 the boycotting of voting system was announced and to make this happen Bhai Sahib, Bhai Surinderjit Singh Matewal, Bhai Joginder Singh Jinda alias Fauji, Bhai Swaran Singh, Bhai Onkar Singh Garhdiwala, Bhai Amritpal Singh and other Jhujaru Singhs spoke to MPs and MLAs that were standing for elections to stand down and if they didn’t, for example candidates like Balwinder Singh Fatupuria who were killed for opposing the boycott.

Jhujaru Singhs tried to clean Punjab by demolishing drug dens and pubs that sold poisonous alcohol. Bhai Sahib was a fair person, he would warn people from taking dowry, gangsters from committing crime and even the newspaper agents that sold Hindu media, if these people didn’t change after 3 warnings than Bhai Sahib would have no choice but to punish them. Then a pimp and seller of illegal alcohol from Raipur Balan district Jalandhar, Joginder Singh was known for selling the daughters of Punjab to the Sheikhs of Dubai. Bhai Sahib carried out an assassination attempt on him but failed, but after this Joginder Singh stopped all his wrong deeds and asked for forgiveness.

One day Bhai Sahib and Bhai Swaran Singh Swarana were travelling from Sham Chorasi, when all of sudden Punjab police started chasing them. Bhai Sahib managed to send the police the wrong way and quickly got to the village of Lajkapela where other Jhujaru Singhs from Bhai Sahib’s village were resting. Bhai Sahib told the singhs that the police are chasing him and they need to get out of the area as soon as possible. Bhai Sahib took a Maruti car from one of the locals and told him to report it stolen after an hour or he can pick up the car the following day from the given location. Even after this an informant told the police that Bhai Sahib and other Jhujaru Singhs had gone in this direction, the police tried to chase them but Bhai Sahib had reached a safe place by then.

One thing about Bhai Sahib is very famous, that he never killed informants straight away. Bhai Sahib would interrogate the informants before finally killing them. Once in Bulowal Bhai Sahib was surrounded by the police, he quickly went into the farms and changed his clothes and disguised himself as farm worker. Bhai Sahib hid his AK47 assault rifle into the bundle of crops which he carried on his head. After that Bhai Sahib walked past the police and escaped, like this Bhai Sahib had fooled the Indians security forces many times. Once Bhai Sahib along with his group looted 12 rifles from gangster which were provided to them by the Punjab police, to kill Jhujaru Singhs for rewards. In many villages Bhai Sahib had made positive changes, gangsters were scared to commit any crime in the area Bhai Sahib controlled. Bhai Sahib also punished an ASI officer and a Hawaldar in the village of Kandola, near Aadampur. Bhai Sahib along with his group attacked and looted the police station of Dharoli Kalan. Bhai Sahib assassinated Darshan Singh of village Dhunga, he had many Jhujaru Singhs arrested and killed. This was the same Darshan Singh who had Bhai Jaspal Singh Padda’s mother made shaheed. Bhai Sahib, Bhai Surinderjit Singh Matewal, Bhai Jaspal Singh Padda and Baba Ram Singh Maniala killed 5 locals of Dyalpur village who gave out sweets when Bhai Sukhwinder Singh Sangha of Bhindranwala Tigers Force of Khalistan attained shaheedi.

Once Bhai Sahib, Bhai Surinderjit Singh Matewal, Bhai Swaran Singh Swarana and Bhai Joginder Singh were travelling through Aadampur in a Maruti car, the Indian security forces had set up a check point on the bridge of Aadampur. When the SHO saw the car of the singhs, he signalled to stop. Bhai Sahib had no escape root and stopped. Then the ASI and a Hawaldar shouted at the singhs to show the paperwork of the car. Bhai Surinderjit Singh Matewal replied, “Bhai Ji, we are like you, police officers. Please let us go and stop other people you can bother, we have to be somewhere quickly.” But the ASI said, “It doesn’t say on your forehead that you are police officers. Either show your ID cards or be quiet while we search you.” Bhai Matewal signalled to Bhai Sahib and said, “Brother, I think we have to show them our ID cards or else they won’t let us go.” Upon hearing this Bhai Sahib opened fire onto the police officers, sending 8 of them to hell to check the ID cards. The remaining police officers and the ASI hid and some jumped into the river for cover, it was the locals that told the police officers half an hour later, “Sir, you can come out now, the singhs have escaped.” The following morning, the ASI was so embarrassed that he and his team surrounded the Aadampur village and harassed the locals as they searched each house for the Jhujaru Singhs.

Another time the locals of Doleke village were continuously harassed and beaten at the checkpoint set up by the Punjab police on the outskirts of the village. The police would forcefully take money from the locals, this discrimination was too much for the locals and they requested Bhai Sahib to do something about it. Bhai Sahib along with his group went to the checkpoint in the broad daylight. There were more Jhujaru Singhs than there were police officers, soon as the singhs surrounded the police force the enemy raised their hands and surrendered. Bhai Sahib got the police to put their weapons on one side then he made them rub mud onto each others face. The police force was begging the Jhujaru Singhs to spare their lives and said, “Bhai Sahib we will remove this checkpoint and stop bothering the locals, even our fathers will not set up a checkpoint here.”

Bhai Sahib was the master of disguise, he did every action after considerable planning and even before killing the informants, Bhai Sahib gave them 3 chances. In the start of April 1992, Bhai Surinderjit Singh Matewal was surrounded by the Indian security forces in the village of Mauli due to an informant. In this fierce encounter which lasted for many hours, Bhai Matewal attained shaheedi. This was heart-breaking news for the Sikh Freedom Movement and Bhai Sahib as these two Jhujaru Singhs were like blood brothers. After the shaheedi of Bhai Matewal, Bhai Sahib made Lt General of Khalistan Commando Force from Area Commander. Bhai Sahib remained active in the Jalandhar, Kapurthala and Hoshiarpur area.

When the Jhujaru Singhs of Khalistan Liberation Force kidnapped the Romanian Ambassador to India, Liviu Radu, the Indian security forces were on high alert in Delhi and Ludhiana. At this time, Bhai Gurjant Singh Budhsinghwala gave Bhai Sahib the custody of Liviu Radu and ordered him to keep the Ambassador safe. Towards the end of this mission, Bhai Sahib had fully showed respect and hospitality to Liviu Radu and after put him on a train from Kala Bakra. Bhai Sahib, Bhai Kulbir Singh Barapind, Bhai Swaran Singh Swarana and Bhai Baljit Singh punished the informant by the name of Bhaag in the village of Gharha, near Phillaur, he had Bhai Gurdeep Singh Deepa Heranwala made shaheed.

Bhai Sahib, Bhai Swaran Singh Swarana, Bhai Surinderjit Singh Matewal, Bhai Joginder Singh and Bhai Sukhwinder Singh Sukhi attacked the police station of Kandala and killed the cruel SHO there along with his patrolling party. Bhai Sahib and fellow Jhujaru Singhs had escaped but the Tanda police took 3 and half hours to come to the scene of the battle and picked up the bodies of the SHO and his team. Then in the village of Kandala Jattan, a Pakhandi Baba in the disguise of a Sikh had teamed up the police and had many locals harassed by his goons and the police officers. In Broad daylight Bhai Sahib killed this Pakhandi in front of his followers and it was after this the locals breathed a breath of peace.

In the end, Bhai Sahib was arrested unarmed due to an informant giving his location to the Punjab police. After brutal torture and interrogation, Bhai Sahib gave no information to the enemy and finally of 24th June 1993, Bhai Sahib was killed in a fake encounter in the village of Kahlwan, near Kartarpur. All freedom fighting groups and everybody that was attached to the Sikh Freedom Movement very much respected Bhai Sahib and his sewa of the panth. The people of Doaba have felt incomplete since the Shaheedi of Bhai Sahib. 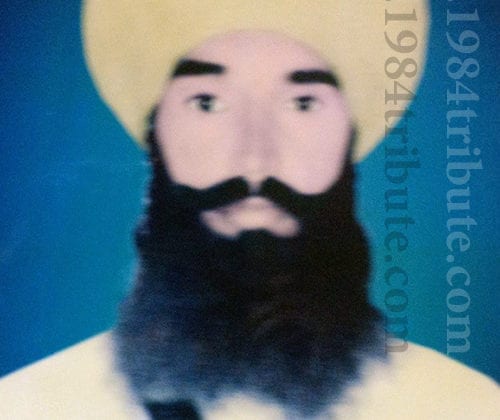