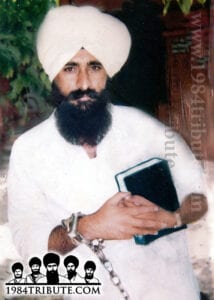 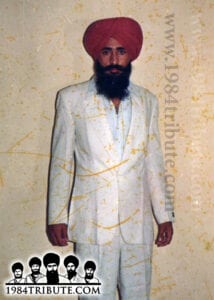 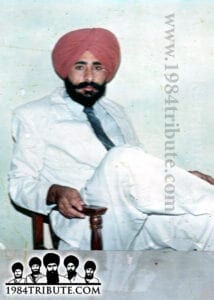 Bhai Harvinder Singh Topi was taken out of Jalandhar Jail on orders of a congress minister by the brutal Hindustan police then murdered (made Shaheed) after being imprisoned in jail for two years.

“How life has been lived bearing pain and sadness. I feel ashamed calling this country my own country.” By Doctor Mohammed Iqbal

At this present time all over the world there is a powerful freedom wave in which talks of Khalistan are of upmost importance. My opinion is that the Sikh community are fighting for their high spirits and justice. There is nothing new here in what the Sikh community are having to do. They have always had to struggle and fight against injustice from the times of Guru Nanak Dev Ji Maharaj when the Babar’s had their differences in regards to religion. There were many that came with the thinking of the Babar’s that tried to finish the Sikh community off. History is our witness that they were finished themselves and that the Sikh community has always remained in high spirits. Delhi has always been home to the thinking of Babar. Many faces have come and gone in the form of Saints that have taken birth to keep an eye on these brutal Babar’s thinking based on individuals to stop their injustice. Sant Jarnail Singh Ji Khalsa Bhindranwale took on a struggle to teach the brutal individuals such as Indira Gandhi a lesson and in this struggle many young Sikhs became martyrs fighting against the oppression Indira’s tyranny. In this way Bhai Harvinder Singh Topi became a martyr fighting against this brutal Indian government on the 10th April 1993.

Bhai Harvinder Singh Topi was born in November 1961 his father was Sardar Dalip Singh Cheema and mother was Mata Gurdeep Kaur. Bhai Sahib was religious from a very young age with brave thoughts and self-respecting nature. His mother was very religious who had full faith in Sri Guru Granth Sahib Ji Maharaj. Both his mother and maternal uncle (Mama Ji), Jathedar Piara Singh (village Lakhan Khurd) had a great influence on his life. His maternal uncle was tortured and made a martyr by the Punjab police in May 19­89.

Bhai Sahib studied in his village for his early years of learning then passed his metric studies in Dasuya. After his studies Bhai Sahib started work as a farmer and kept practicing Sikhi. Bhai Sahib spoke very sweetly, was a calm being who was extremely patient and would make anyone he met once his. Bhai Sahib was always ready to do Sewa for the Sikh nation and was always ready to lay down his life for righteousness. During this time religious campaigns (Dharam Yudh Morcha) started in which on 10th October 1982 he was arrested for the first time in a group. This group was led by Jathedar Iqbal Singh. Bhai Harvinder Singh Topi had to stay in jail for many days and it was during this time his visits to Sri Harimandir Sahib in Amritsar started. Bhai Sahib then became very close to Sant Jarnail Singh Ji Khalsa Bhindranwale and Bhai Amrik Singh. They both guided Bhai Harvinder Singh Topi to campaign for Dharam Yudh Morcha.

During this time in December 1983, an advanced training camp under the guidance of Sant Jarnail Singh Ji Khalsa Bhindranwale and Bhai Amrik Singh (president of All India Sikh Student Federation) was arranged. Bhai Harvinder Singh Topi attended the camp with his friends and attained knowledge of Sikh ideology. For the well-being of the Sikh nation as per the teachings of Sant Jarnail Singh Ji Khalsa Bhindranwale, Bhai Sahib participated in the struggle of Dharam Yudh Morcha. Then Bhai Sahib established AISSF units in schools, colleges, cities and villages to play his part in the Sikh struggle. During this time India’s brutal police arrested Bhai Kulwant Singh Nagoke and murdered him by torturing him in an inhuman way. Bhai Nagoke’s dead body was a clear picture of inhuman torture which impacted Bhai Harvinder Singh Topi deeply and then he sacrificed himself for the struggle of the Sikh nation. Bhai Sahib worked with Master Swaranjeet Singh, Bhai Ratan Singh (village Usman Shaheed, Bhai Partap Singh and Bhai Lembhar Singh for the progression of All India Sikh Student Federation.

Then in the beginning of June 1984, India’s Hindu ideology holding government attacked the holy Sri Darbar Sahib in Amritsar. They demolished Sri Akaal Takht Sahib with tanks then they burnt rare historical books and the Sikh reference library to ashes. They killed thousands of children, youngster, ladies and elderly. Thousands of youngsters were arrested and jailed. During this time, the brutal Indian government attacked thirty-seven other historical Gurdwara’s which wounded the hearts of all the Sikh community worldwide. Bhai Sahib was very deeply hurt by this, he was also arrested by the Dasuya police alongside with his friends where they were tortured and sent to Hoshiarpur jail. After some time, Bhai Sahib was bailed out and then again in 1985 he was arrested and sent to Amritsar jail until he was bailed out again.

In 1985, All India Sikh Student Federation arranged a large conference in Dasuya and Bhai Sahib had organized it. Professor Darshan Singh, Bhai Harinder Singh Kahlon, Bibi Bimal Kaur and other leaders addressed people attending. Dasuya police then again arrested Bhai Sahib for a very long time, tortured him and kept him in custody illegally. In 1986, Hoshiarpur police arrested him and tortured him when he was coming back from Sarbat Khalsa, Amritsar. Bhai Sahib was then bailed out again after some time. After this Bhai Sahib was fed up of the police behavior towards Sikhs and the anti-Sikh elements that he then adopted weapons to support the Sikh struggle and went underground. In jail, Bhai Sahib met General Labh Singh (Khalistan Commando Force), Bhai Jaspal Singh alias Dhanna Singh, Baba Ajit Singh Kaunta, Bhai Daljit Singh Bhikhi, Bhai Dalwinder Singh Chup, Bhai Davinder Singh Baba, Bhai Satnam Singh Atalgarh and Bhai Manjit Singh Khujala. All this group of Jhujaru Singh punished many people that were against the Sikhi and Sikhs. With the blessings of Guru Maharaj, they always escaped from the police battles alongside their Jhujaru brothers.

In 1988, the Punjab police arrested Bhai Sahib with the help of an informant and then Hoshiarpur and Kapurthala police force tortured him brutally but Bhai Sahib did not reveal anything. Bhai Sahib had told only Bhai Daljit Singh Bhikhi where he had stashed the weapons and Bhai Bhikhi along with his friends took those weapons few days after the arrest of Bhai Sahib. After pressure of the public Bhai Sahib was sent to Nabha jail, he stayed in Nabha and Sangrur Jail for around two years and then in 1989 he was released on bail. The police torture and the time spent in jail did not demotivate Bhai Sahib but made him more determined towards his goal of attaining Khalistan. Bhai Sahib continued the struggle and arranged a large conference by the All India Sikh Student Federation in which Simranjit Singh Mann, Bhai Satpal Singh Dhillon, Baba Thakur Singh Ji Bhindranwale from Damdami Taksal and other community leaders addressed the public. In seeing this, the Punjab police was to afraid to stop this conference and instead raided house of Bhai Sahib and after this he went underground.

Bhai Sahib joined Khalistan Commando Force under the guidance of Bhai Paramjit Singh Panjwar, and along with his Jhujaru brothers such as Bhai Iqbal Singh Bagha, Bhai Avtar Singh Bali, Bhai Jasvir Singh Sodhi, Bhai Nirmal Singh Shotu, Bhai Swaran Singh Jinda, Bapu Bachittar Singh Bubbly and Bhai Lakhwinder Singh. Bhai Sahib jumped into the armed struggle and killed many people who preached against Sikhi as well as informants that had Singhs and Singhnia made martyrs by the hands of Punjab police. During this time, Bhai Sahib and his Jhujaru group encountered the Punjab police on many occasions but they got away every time causing great damage to the enemy. In May 1990, a fierce battle took place between the Jhujaru Singhs and the Punjab police near the village of Nimamudin (Jalandhar), the DGI of Punjab Police R Bhatti announced that Bhai Sahib and Bhai Avtar Singh Bali had been killed in this encounter. This news spread across Punjab the following morning, mass load of people gathered together causing traffic jams on Jalandhar-Pathankot Road in Dasuya after hearing about Bhai Sahib’s martyrdom. The public demanded the dead bodies of the martyrs from the police. Later when Bhai Sahib’s mother was taken to identify the body of her son, she told the gathered public that it was not Bhai Harvinder Singh Topi’s body and it was infact the body of Bhai Jasvir Singh Sodhi. Both Bhai Harvinder Singh and Bhai Jasvir Singh Sodhi were very similar looking. Bhai Sahib and some of his Jhujaru brothers had left that Nimamudin before the encounter.

Looking at the popularity of Bhai Sahib the police were very scared, so they tortured his family and destroyed his crops. They forced Bhai Sahib’s family to live a life of fear avoiding torture and harassment of the Punjab police. Bhai Sahib was always ready to help the poor and needy. During Bhai Sahib’s time no thieves dared to rob any person or property. Bhai Sahib use to coordinate between Sikhs and Hindus, he used to say our fight is against the brutal government not against any caste or religion. As there were kind hearted people like him there was also traitors and unreligious people who caused great damage to the Sikh struggle.

With the help of informants, the police arrested Bhai Sahib from Ludhiana. At that time, he was attending a private meeting with the Jhujaru Singhs of Khalistan Commando Force such as Bhai Nirmal Singh Nimma (Kartarpur), Bhai Bagel Singh Dhariwal, Bhai Darshpreet Singh Roomi and others. After the meeting, Bhai Sahib was planning to see one of his friends at CMC Hospital who was admitted there but he got arrested. After the arrest, he was very brutally tortured and when people found out about Bhai Sahib’s arrest, they surrounded the police station and helplessly after a few days the Punjab police had to file an FRI in April 1991 and sent him to Jalandhar jail. Bhai Sahib stayed in jail continuously for two years. Meanwhile in Punjab the Congress party was in power and they were playing the festival of colors with the blood of the Sikh youth.

On the 9th of April 1993 the Punjab police took Bhai Sahib to Mahilpur police station and made him a martyr in a fake encounter. People were outraged with the news of Bhai Sahib’s martyrdom. On the 20th of April 1993, Sri Akhand Path Sahib Bhog (Prayers) was performed at his home in the village Usman Shaheed where there were thousands of Sikhs, Hindus and other religious leaders who paid their respects to Bhai Sahib. Everyone felt the loss of Shaheed Bhai Harwinder Singh Topi and were deeply saddened. Bhai Sahib may not remain with us now but in ideology he will always remain with us. 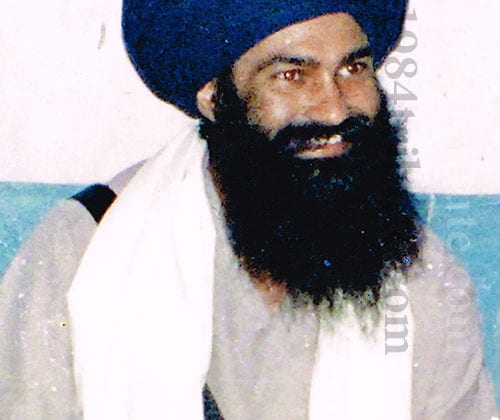