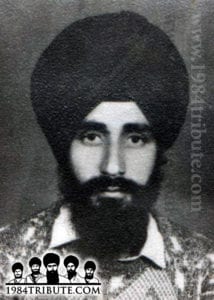 Bhai Harmail Singh Mela alias Rebero was born in the year of 1962 from the womb of Mata Shaminder Kaur and in the house of Sardar Mohinder Singh. Bhai Sahib’s village is roughly 10km away from Nakodar, district Jalandhar. From childhood, Bhai Sahib was religious and did not tolerate injustice on anyone. Bhai Sahib did his nitnem daily and his personality was of a lovable and respective person. Bhai Sahib had a younger brother Bhai Iqbal Singh. Bhai Sahib studied until 10th class at a school in nearby village of Heran. Bhai Sahib’s late father, Sardar Mohinder Singh was also a religious man who believed in equality for all, he filled the stomachs of his family with honest living, as well as studying Bhai Sahib also helped his father in the farms in the village. Bhai Sahib was loved by locals and with love he was called Giani. From the start Bhai Sahib was a lovable person and calm. Bhai Sahib would remain lower than everyone.

Bhai Sahib took Amrit from Panj Pyare on the Visakhi of 1987 and started his life of a Gursikh. Bhai Shaib did nitnem of 5 prayers, Sukhmani Sahib and many more prayers daily. Bhai Sahib and his close friend Bhai Bharpur Singh Bhura would visit Sri Darbar Sahib twice a month. Bhai Bhura was also a smart and loveable Singh.

In June 1984, Indira Gandhi used all her might including latest weapons, tanks and cannons to finish off the Sikhs and tried to prove to the world that Sikhs are slaves in India. Thousands of innocent Sikhs that had come to Amritsar to pay respect to the Martyrdom of the 5th Nanak, Guru Arjan Dev Ji were mercilessly killed. Elders, women and children no one was spared. The Indian tanks demolished Sri Akaal Takhat Sahib and the holy sarovar was filled with the pure blood of the Sikhs. This attack on the Sikh throne left Bhai Sahib devastated. When the army lifted the curfew for Sikhs to enter Sri Darbar Sahib complex, Bhai Sahib and his friends came to Sri Harmandir Sahib to do darshan. Bhai Sahib was extremely saddened to see the demolished Sri Akaal Takhat Sahib and the murders of innocent Sikhs. It was at this time Bhai Sahib thought that he will take his revenge against the evil government for the killings of innocent people. Bhai Sahib did ardas standing in front of Sri Akaal Takhat Sahib:

“Hey Waheguru, We cannot see this act of evil. No son can see his father being disrespected. Waheguru, give us the power to do the sewa of punishing the evil men that did this to our beloved Sri Akaal Takhat.”

Both Singhs made their minds up to contribute the remainder of their lives to the Sikh Freedom Movement. Now Bhai Sahib and Bhai Bhura started staying at Sri Darbar Sahib complex, at that time the sewa of the holy sarovar was being done. Bhai Sahib had forgotten his family and put his mind and heart into the sewa of the panth has months had passed. Bhai Sahib was still staying in the complex. It is here where Bhai Sahib met the chief of Bhindranwala Tigers Force of Khalistan, Baba Gurbachan Singh Ji Manochahal. Bhai Sahib started staying with the Singhs of this group and gave respect to the Singhs and in return gained respect of the Singhs. In this group that Bhai Sahib had joined, were the Singhs like Bhai Surjit Singh Painta, Bhai Inderjit Singh Nawashaher, Bhai Sukhwinder Singh Sangha, Bhai Hari Singh and Bhai Gurdeep Singh Deepa, all of these Singhs were close to each other. In a short time Bhai Sahib had proved his bravery and earned a name for himself. Bhai Sahib was very much loved by the Singhs of the Sikh Freedom Movement and taught everyone to do sewa of the panth from heart and treat women as their panthic sisters.

Bhai Sahib never used his involvement in the Sikh Freedom Movement to discriminate the poor or the weak. Bhai Sahib was married in 1986 to Bibi Hardeep Kaur, daughter of Sardar Bhajan Singh from the village of Noorpur, district Jalandher. Bibi Hardeep Kaur gave birth to Bhai Sahib’s son Bhai Ranjodh Singh and one daughter. Bhai Sahib loved everyone and never hurt the hurts of people. Bhai Sahib would always help the poor and never spared enemies of the panth.

“Rebel Rebero killed along with others, heavy ammunition found”

Jalandhar (KC Patti) – Bhindranwala Tigers Force of Khalistan rebel Harmail Singh Mela alias Rebero was killed this morning in a fake encounter in the village of Mundha near Nakodar. There was a reward on Harmail Singh of 30,000 Rupees 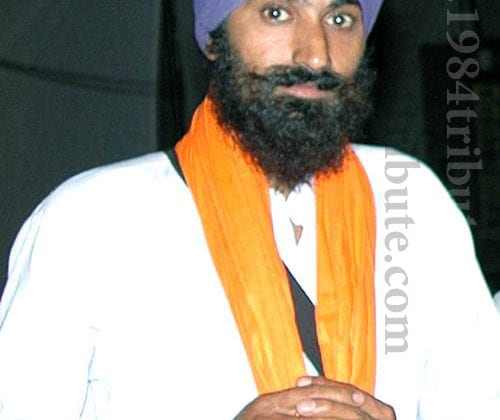