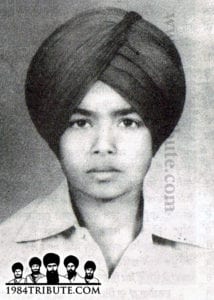 A resident of village Mehflabad, district Kapurthala Sardar Karam Singh and his wife Sardarni Swaran Kaur had 5 children, Bhai Harjinder singh, Bibi Paramjit Kaur, Bibi Bhupinder Kaur, Bhai Daljit Singh and Bhai Satnam Singh. Bhai Sahib was the eldest of the 5 brothers and sisters. Bhai Sahib was only 13 years old when Mata Swaran Kaur passed away, now the whole responsibility of family and house dropped on the shoulders of Sardar Karam Singh. But due to so many responsibilities, Sardar Karam Singh had no choice but to take Bhai Sahib out of school and share the weight of responsibility. Upon leaving education Bhai Sahib fulfilled his role as the eldest son of the family, but at the same time he also started learning Santhaya of Gurbani at the historical Gurudwara of the village, Gurdwara Gurusar Sahib Patshahi Shevi. As the family of Bhai Sahib was Amritdhari and followed the Gurmat ways, Bhai Sahib was also in to Sikhi from childhood, soon Bhai Sahib began to recite gurbani like a granthi Singh.

These were the days when the rulers of Delhi had declared war on the Sikh faith. Sant Jarnail Singh Ji Bhindranwale was commanding the Dharam Yudh Morcha for the equal rights of the Sikhs in India. An Army was in the making at Sri Akaal Takht Sahib of brave Sikh warriors willing to give their lives for the Sikh panth. Sikh youth where leaving there homes to battle against the oppressors. Bhai Sahib also left home one day without any notice and arrived and Sri Darbar Sahib. After asking around Sardar Karam Singh found Bhai Sahib and bought him back home. Some time passed like this, Bhai Sahib would leave home but Sardar Karam would go and bring him back. Sardar Karam would explain to his son, “Son Jinde, you’re the eldest of 5 brothers and sisters and your brothers and sisters are not old enough to understand the responsibilities of the house. That’s why son, stay at home and help me run the household so that your brothers and sisters can be bought up properly with education. “But Bhai Sahib would answer saying, “ But father you are living in these 4 wall and you think that these that 5-6 of these bodies are your only family, but my family is the whole Sikh panth. The Guru panth needs me more than this family.”

Then in 1982, Bhai sahib went to Sri Darbar Sahib and joined the Babbar Khalsa freedom fighting group. Bhai Sahib had only left home two years ago and the government attacked Sri Darbar Sahib with tanks and cannons in June 1984. At that time Bhai Sahib was also in the complex fighting the invading Indian government. Like the planning of the rest of the singhs of Babbar Khalsa, Bhai Sahib also managed to escape from the complex and fight in the bigger battle from outside. Most of Bhai Sahib’s Khadku life was spent with known warriors like Bhai Ranjit Singh Tarsika and Bhai Rana Partap Singh. During the stay with the singhs of Babbar Khalsa, Bhai Sahib honestly and bravely carried out all missions that were given to him. Bhai Sahib gave many police informants, black cats and enemies of the Sikh panth the ticket to hell. Bhai Sahib was wanted for many cases such as the killings of BJP leader Kewal Krishan, evil headmaster of a school in Dheriwal, the sarpanch of TarsIke village was a well known traitor and an informant from the same village.

Bhai Sahib mainly carried out mission in the Jandiala Guru area. A Thanedar of this area would show love to the singhs of Sikh Freedom Movement, but at times he would also show his loyalty to the government of Delhi. This Thanedar had won the trust of many singhs and later made them shaheed. Bhai Sahib also knew this two faced Thanedar. The Thanedar had helped and fed Bhai Sahib few times, which led to Bhai Sahib trusting this Thanedar. The Thanedar was always in search of the right moment to make the singhs shaheed.

The ceremony of Anand Karaj was yet to begin when an informant told the police about the presence of the singhs at the wedding. Within a few minutes the Punjab police and CRP surrounded the Tariska village. When Bhai Ranjit Singh Tariska’S family got the news of the Indian security forces surrounding the village they told all of the singhs to leave so the wedding would not be disrupted. Even the singhs knew that people attending the wedding would get hurt or even killed if an encounter was to start here. Also the singhs didn’t want to wreck the wedding of their sister but Bhai Sahib calmly sat down on the floor in the presence of Sri Guru Granth Sahib Ji Maharaj and said “Maharaj has made me his horse on which they travelled on to this house form the Gurudwara. I can only go home once I have taken Guru Granth Sahib Ji back to  the Gurudwara and about the encounter, all you singhs just relax and sit down in the presence of our king Sri Guru Granth Sahib Ji, nothing will happen here today. Our sister will happily get married here today and we also will leave this village safely after.”  And that is what exactly happened. The 1000’s of soldiers that had surrounded the Tariska village couldn’t find the strength to go and challenge the singhs. The singhs happily enjoyed the whole ceremony of Anand Karaj and Bhai Sahib as the horse of Sri Guru Granth Sahib Ji took the Sri Guru Granth Sahib Ji back to the local Guru Ghar on his head. After that all the singhs had langar and after saying their Fateh to the family they left the village discreetly. Meanwhile the Indian security forces were laying in the farms waiting for the singhs to come till the next day, but little did they know singhs had left the night before. 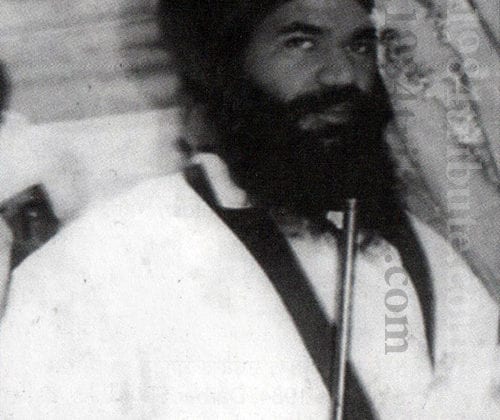 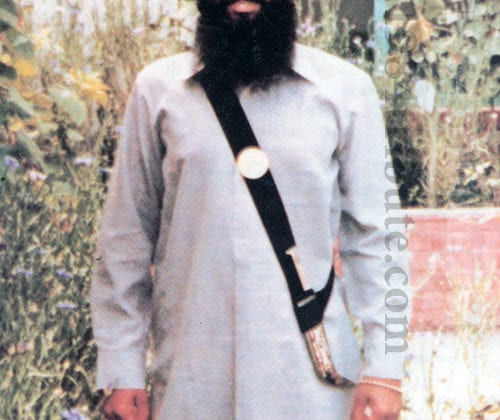