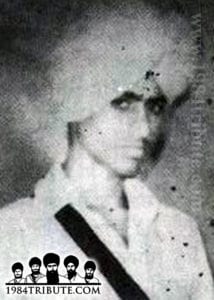 Shaheed Bhai Harjinder Singh Jinda was born on the 2nd of April 1965,in village called Talwandi Bhindran, District Gurdaspur. Bhai Sahib’s mother was Mata Jagir Kaur and father was Sardar Najjar Singh. Bhai Sahib received his primary education from the local school in his village and in 1983 passed metric in a government high school in a nearby village called Veela Bujoo. Bhai Sahib decided not continue with his studies and help his family out because there financial condition wasn’t great, Bhai Sahib’s elder brother became disabled from an electric shock and had two children of his own and Bhai Sahib had 3 sisters. One of Bhai Sahibs brothers had went to Bombay to become a truck driver, so Bhai Sahib dropped his studies and helped his father to do farming. During this time, Operation Bluestar took place and Sri Harmandir Sahib was attacked, which affected and influenced Bhai Sahib a lot, Bhai Sahib took Amrit, Bhai Sahib had always been very religious.

During them days Bhai Sahib got in touch with Bhai Jagir Singh from whom he was influenced by and did undercover sewa for the panth. Even while doing sewa for the panth Bhai Sahib continued to work, Bhai Sahib worked in the telecommunications field and then after that worked in a thread mill. During this time, one day Bhai Sahib was returning from Govindwal Sahib, when Punjab police stopped him and falsely accused him and jailed him and harassed him for 2days. After the police realised that he was a legit guy so they let him go. Due to this event Bhai Sahib was really disturbed, he thought the Sikh panth is facing such hard and bad times and he is too busy with his own things. An inside informer told the police about Bhai Sahib so one night when Bhai Sahib was at work, the police started to surround the area, when Bhai sahib seen them he realised that if he gets caught he will get tortured, Bhai Sahib took advantage of the dark night and escaped from the police and fled to Sri Darbar Sahib. After that the police then arrested Bhai Sahibs father and interrogated and tortured him for 7 days, and then when the police realised that Bhai Sahib still hadn’t appeared they then arrested Bhai Sahib’s mother and abused her badly, eventually the village members (Panchayat) got together and managed to release Bhai Sahib parents. Bhai Sahib started to live with the Darbar Sahib Panthic committee member Bhai Jagir Singh. In 1987 when Operation Black Thunder took place on Sri Harmandir Sahib, Bhai Sahib starved himself for many days and battled against the Government forces. In this battle Bhai Jagir Singh attained Shaheedi. When Bhai Sahib seen that all the good leaders had put their hands up and surrendered then Bhai Sahib joined them and handed himself over to the police. The police kept Bhai Sahib at Mal Market (Mal Mandi) in Amritsar for about a month where the police badly beat him up and tortured Bhai Sahib to try and get information about the Khadku Singhs, but Bhai Sahib tolerated all this and kept his lips sealed and didn’t leak any information about his fellow Khadku Singhs. After this Bhai Sahib was locked up for two and a half months and then eventually released because the police couldn’t prove any of the allegations made against him. Bhai Sahibs body was badly bruised and beaten up because of the torture of by the hands of the police.

When Bhai Sahib got home he decided to get a loan from the Milk Co-operation and start up his milk dairy business again to save himself from any hassle from the police. In the back of Bhai Sahibs mind he regretted the decision he made, he shouldn’t have surrendered to the police, Bhai Sahib felt that he had put a stigma on his name, and that it would have been better if had attained shaheedi while fighting. Many people taunted Bhai Sahib because he had surrendered himself to the police.

Bhai Sahib came to the conclusion that just like all the other great Singh who scarified themselves for the panth, he too would do that same, and wipe the stigma from his name. So Bhai Sahib joined the K.C.F Khadkus, under the command of Bhai Balvinder Singh Shahpur and started his sewa again. The police once again came to Bhai Sahibs house to arrest him, but because Sahib wasn’t to be found, the police arrested Bhai Sahibs father and also Bhai Sahibs Cousin Gurmukh Singh (chacha’s son) and interrogated and then falsely accused them and put them behind bars. And after a long year of suffering Bhai Sahibs father and cousin were released from jail. After Bhai Sahib had joined the Khadku Singh’s he never went back home and dedicated his mind, body and soul for the sewa of the panth and brought justice to many Anti-Sikh elements.

Bhai Sahib had a lot of love for Gurbani. Bhai Sahib also enjoyed singing he used to sing – ‘Sundar Hari Ke Mandir Layee Mein Jind Varni Chaunda Ha’. The Jathebandi Seen Bhai Sahib’s love and dedication for his sewa and had decided to make Bhai Sahib the area commander but one day Bhai Sahib was travelling to a village called Pudhe district Gurdaspur and had stopped at a local villagers house named Bahek, a snitch informed the police, and the police surrounded the house of Bahek, Bhai Sahib was ready for a battle but the Bahek hid Bhai Sahibs weapon and requested Bhai Sahib not to fight because then the police will kill all of his family, Bhai Sahib understood his compulsion, and decided it was wise to make a run, but Bhai Sahib had an injury on his foot. The police followed Bhai Sahib and shot his legs and wounded him and caught him and ceased his weapons. The police rubbed salt on Bhai Sahibs wounds and asked him where his companions were but Bhai Sahib did not tell the police anything and continued to do Simran of Waheguru. In the end, on the 21 of December in 1988 the police tied up Bhai Sahib to the trolley of a tractor and fired bullets at him, Bhai Sahib attained Shaheedi. The next day in Ajit newspaper there was a bold headline, ‘Jinda Samet Police Naal Sakhat Mukhable Vich Hulak – Jinda was killed in a fierce battle with the police’. When the local villagers found out that Bhai Sahib was killed in a false police encounter, they went to the police station to get Bhai Sahib’s body but the police refused and didn’t even take the flowers they brought for Bhai Sahib. Bhai Sahibs father was 83 years old and Bhai sahib still had one sister left that was still to be married, who helped her father with the farming. His elder brother was disabled and the younger brother was a trucker driver who was outside of Punjab. Today a request is being made to the Panth, please pay attention to the families of these great Sikh warriors. Bhai Sahibs dream and goal was Khalistan, his sacrifice won’t go down the drain.