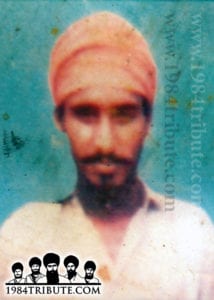 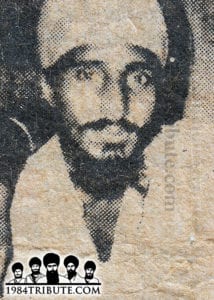 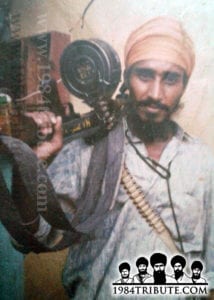 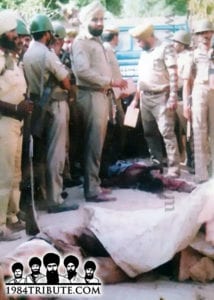 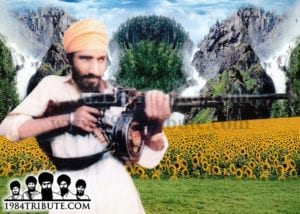 Bhai Sahib’s whole family were Amritdhari Gursikhs, Bhai Sahib himself had taken Amrit from the Panj Pyare at a very young age. Mata Charan Kaur would tell the stories of Sikh Gurus, Sikh History and Sikh warriors to her kids and bought them up with immense love. From a young age Bhai Sahib became attached to the Gurdwara. Bhai Sahib paid less attention at home and did more Sewa at the local Gurdwara, as well as doing Sri Akhand Paath Sahib Rauls. Bhai Sahib also loved to sing Kavisheri, and would regularly sing at the local Gurdwara. Bhai Sahib also loved to play Kabaddi and he was a great player of this sport. At the sports festival of his village, Bhai Sahib always played Kabaddi.

After the martyrdom of his brother, Bhai Sahib also decided to jump into the battlefield to free the Sikhs from the Indian chains of slavery. Bhai Sahib had a little involvement with his brother in doing Jhujaru actions in secret. Once Bhai Sahib left home, he joined Khalistan Commando Force (Zaffarwal) under the command of Bhai Kanti of Sialka village. Up till 1988, Bhai Sahib continued to do actions under Khalistan Commando Force’s Bhai Satnam Singh Bawa as well as Bhai Kant, but after Bhai Satnam Singh Bawa’s martyrdom, Bhai Sahib joined Bhindranwala Tigers Force of Khalistan under the command of Baba Gurbachan Singh Manochahal. Bhai Sahib was made the Lt General of the Kathunangal area due to his bravery and loyalty within the Sikh freedom movement. Bhai Sahib was very young but his Jhujaru actions were very big.

Bhai Sahib punished many police informers and touts that had Jhujaru Singhs killed for money. Bhai Sahib assassinated a police tout by the name of Channi in the village of Dyalgarh, who had Jhujaru Singhs arrested for cash rewards. Bhai Sahib was part of the Jhujaru group that had a well-known battle with Indian security forces in the Rataul area of Tarn Taran district. In this battle, the Indian security forces suffered heavy loss of lives.

On the morning of 26th April 1992, Bhai Sahib along with Bhai Gian Singh Shahzada (village Shahzada, Kathunangal), and Bhai Jagtar Singh Jagga (village Kot Hayat) were resting in the village of Kotli Dhole Shah. This information was given to the Punjab police by a local informer, during that time Bhai Sahib had 5 lakh Rupees reward on his head. Bhai Sahib was not well, and had a fever. As it was early morning, Bhai Sahib and fellow Jhujaru brothers were doing their Nitnem. A heavy presence of Indian security forces surrounded the village and started moving in on the 3 Jhujaru Singhs. Soon as Bhai Sahib realised that they were surrounded, the sons of Dhan Sri Guru Gobind Singh Ji Maharaj started firing towards the enemy, sending them to hell on a one-way ticket. This battle started at 7 o’clock in the morning and continued up till 4 o’clock in the evening. Bhai Sahib and the fellow Jhujaru Singhs had stored most of the weapons and ammunition at another place as they were scheduled to do a Jhujaru actions elsewhere. Due to this, the Jhujaru Singhs had only little ammunition to take on the Punjab police, CRPF, BSF and Indian army. The longer this battle continued the more ammunition was used and the enemy was getting closer to the 3 Jhujaru Singhs. When the Indian security forces couldn’t get close, they started throwing grenades into the house from which the Jhujaru Singhs were fighting from and like this, all 3 sons of the Sikh nation attained martyrdom and had their names written in the Sikh history.

Information given by the family of Shaheed Bhai Hardev Singh Kalia 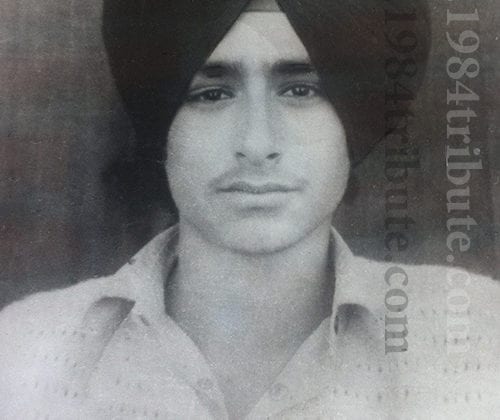