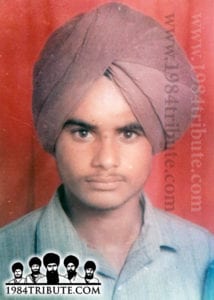 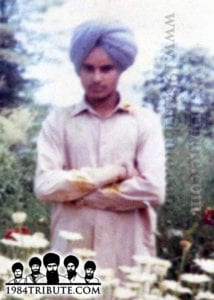 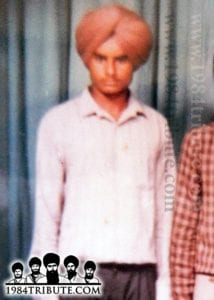 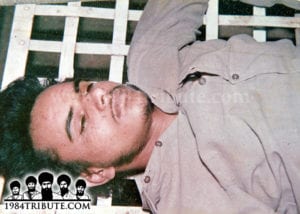 Bhai Gurmeet was born on 28th May 1968, at the residence of his grandparents (nanake) in the village of Pehlowala, District Faridkot. Bhai Sahib was originally from village Machaki, which is also in the Faridkot District. From the start Bhai Sahib was attached with Sikhi and would always do his nitnem. Bhai Sahib was also great in picking out his targets, his aiming was excellent.

In January 1985, Bhai Sahib went to Sri Harmandir Sahib to do darshan, but when he got home he was very sad. When his family members asked if he was ok, he replied, “What kind of country am I living in, in which our faith is brutally discriminated.” Slowly Bhai Sahib became of a member of All India Sikh Student Federation and started taking part in secretive actions, during that time Bhai Sahib studied at a college in Kotakpura.

The government of India had organised many Hindu Extremists gangs in Punjab to continue disturbing the peace. These gangs were attacking houses, businesses and Gurudwaras of the Sikhs. When the Sikhs would peacefully protest against such actions, the Indian security forces would shoot at the crowd with live ammunition. In the beginning of 1986, gangs of Hindu extremists burnt a gurudwara in Nakodar area. In the Fire 5 saroops of Sri Guru Granth Sahib Ji and Rumalla Sahibs were burnt. The next day Sikhs peacefully protested against this, but the Indian security forces started firing live rounds at the gathered Sikhs, 4 Sikhs attained Shaheedi and a further 9 were hospitalised with bullet wounds. No action was taken against the extreme Hindus who burnt saroops of Sri Guru Granth Sahib Ji and the gurudwara building.

To show their anger to the government regarding these attacks on Sikhs beliefs. The Sikh Student Federation decided to call for a Punjab shutdown. Bhai Sahib and other workers of Sikh Student Federation gathered at the Faridkot’s Gurudwara Baba Fareed Ji to shut down the Bazaar. But the Punjab police arrested 21 singhs here and locked them up at Bathinda jail. After 15 days these singhs were released, they had been illegally detained before their release. Bhai Sahib left his studies half way and went underground to join freedom Fighter group Khalistan Liberation Force and started his Jhujaru Singh life.

First action of Bhai Sahib was when he killed 4 officers in Ludhiana. Then sometime later, Bhai Sahib punished Hindu extremists in Nakodar who were terrorizing Sikh families. This action was well known as ‘Malhan Kaand’ after punishing the enemies of Guru Maharaj, the Jhujaru Singhs went back to their base but due to an informant the police also followed the Singhs as they were going to orange farms to get their weapons, but as Bhai Sahib went to get weapons from the farm, they fell into the trap of Punjab police.

After being arrested, for 15 days Bhai Sahib was kept at the CIA staff headquarters in Jalandhar where he was brutally tortured. On the 13th of April 1986, Bhai Sahib was sent to Sangrur jail from Jalandhar and after a year here Bhai Sahib was moved to Hoshiarpur jail. It was from here Bhai Sahib escaped from jail with the help of Bhai Jugraj Singh Toofan and 5 more Singhs.  The brutal torture and a lengthy prison sentence did not sway Bhai Sahib off the path of the Sikh Freedom Movement. Upon being released from jail, Bhai Sahib started punishing the Anti-Sikh elements, like a lion lashes onto his hunt after being release from his cage. Just like how a lion can be caged be he will never forget how to hunt. A Jhujaru Singh like Bhai Sahib can be jailed but he can never forget his duty for the panth.

Bhai Sahib had attacked the DGP of Ferozpur, who had killed many Singhs and put many more in jail, but the DGP survived. Bhai Sahib also sent informants from villages of Korewal, Ranian and Araian to hell, with no return ticket. Then in 1987, Narakhdhari Ghansham Das who as the 6th star out of the 7 stars made by the Narakhdharis was assassinated by Bhai Sahib at the medical college of Faridkot. In the 2 years of Bhai Sahib’s Jhujaru life, Bhai Sahib did many brave actions and killed many enemies of the Sikhs.

When the Sikh Freedom Movement was at its peak, the Indian security forces were killing innocent Sikh youths in fake encounters and even then the families that gave langar to the Jhujaru Singhs would get harassed and killed. At this time Bhai Sahib and Bhai Amrik Singh Pakhi Kalan released a press note and warned such police officers by stating, “If fake encounters or charging Sikhs with fake cases does not stop then the Khalistan Liberation Force will start killing Hindus and only the Indian security forces and the Indian government will be to blame.”

Whenever Bhai Sahib met his parents he would say, “One has to be a Shaheed if he/she takes the same path as me. Mother, when you hear the news of my Shaheedi, you must not cry. Show everyone that you are a brave mother of a Shaheed.” Bhai Sahibs mother followed these request of her son and after Bhai Sahibs Shaheedi she did not cry.

From jail Bhai Sahib wrote a letter home and in the letter he wrote, “This world is a dream, everyone will leave it one day, maybe earlier or maybe after. No one will stay here forever, for that reason recite as much Gurbani as possible,” Even in Mukhatsar’s Siti police station the police blindly tortured Bhai Sahib. Finally when 12th July came and Bhai Sahib’s remand was to finish, the newspapers headline read:

“Dangerous khadku Gurmeet Singh died in Mukhatsar police station when a poisonous snake bit him. There was a 1 lakh rupees reward on his head. Police had been questioning him regarding many murders and bank robberies.”

When the family members and Sikh sangat tried to get the body of Bhai Sahib, the police told the family to write that it was a snake bite which killed Bhai Sahib and only after that they could take the body home. But Bhai Sahib’s mother asked the police, “Show me where the snake bit my son? It’s you that bit him, didn’t the snake bite you?”

At that time Bhai Sahib had blue bruises all over his body from the torture, there was clotted up blood near the temple of Bhai Sahib’s head. Bhai Sahib’s mother wiped the blood of her son with her chuni. The evil police officers did not give Bhai Sahib’s body to the family and then cremated Bhai Sahibs at the cemetery on the side of Bathinda Road. Every year on 10th July, Bhai Sahib’s family hold a Sri Akhand Path Sahib at their village of Machaki.